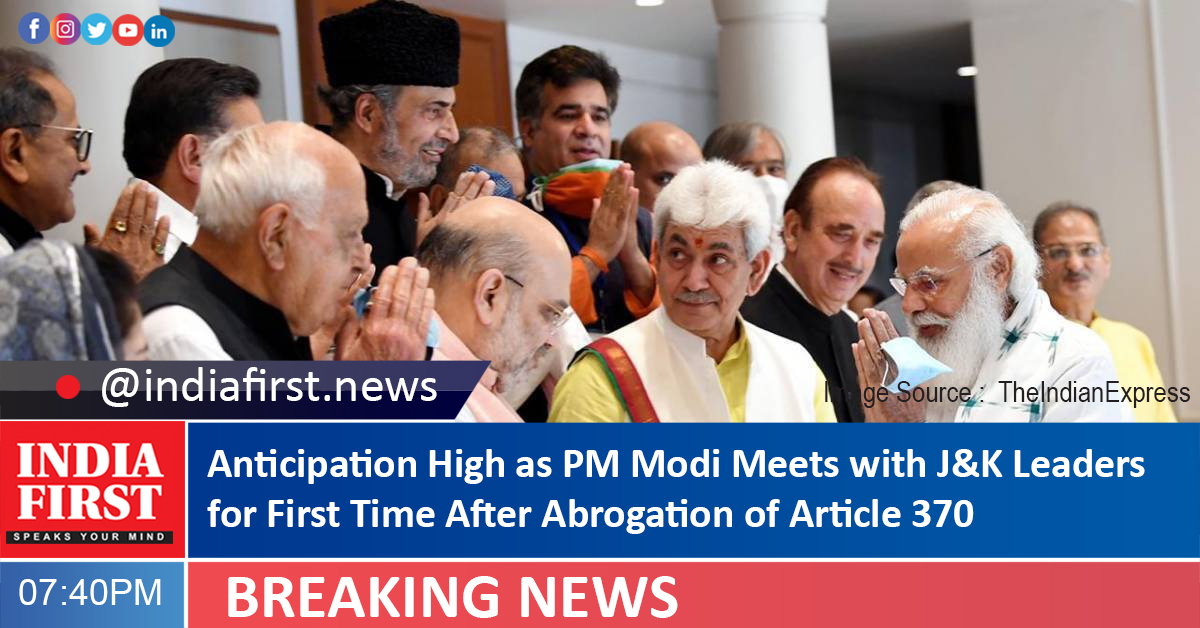 A crucial all-party meeting between Prime Minister Narendra Modi and politicians of different parties in Jammu and Kashmir to discuss the road ahead has begun in the national capital after almost two years of the erstwhile state lost its special status and was downgraded into two union territories – Jammu and Kashmir with an Assembly and Ladakh without one.

However, there is no specific agenda for the meeting that started at PM’s 7 Lok Kalyan Marg residence at 3 p.m. Leaders participating in the first such meet initiated by the Central government earlier said the agenda was very clear about the restoration of statehood.

Four former Jammu and Kashmir Chief Ministers are among the 14 leaders participating in the meeting on Prime Minister’s invitation to them last week. Three of them, National Conference leader Farooq Abdullah, his son Omar Abdullah and Peoples Democratic Party (PDP) Chief Mehbooba Mufti, were jailed for six months to one year from August 5, 2019, when the changes were enforced.

There are reports that the meeting may focus on the delimitation exercise to redraw the boundaries of the Assembly constituencies in Jammu and Kashmir ahead of Assembly elections.

Three National Conference MPs, including Farooq Abdullah, who had boycotted meetings of the Delimitation Commission, have indicated that they will join the proceedings if the chairman of the Commission addresses their concerns since a case is pending before the Supreme Court.

The National Conference and other parties have challenged the August 5 decision and the delimitation exercise before the Supreme Court.

Some groups in Jammu have been strongly opposing the delimitation exercise because Census 2011 will only favour the Kashmir Valley.

Ahead of the Prime Minister’s meeting with political parties, the Delimitation Commission on Wednesday held virtual discussions with all 20 deputy commissioners of the UT on physical, demographic and administrative issues concerning their districts. The data is to be utilised for redrawing the Assembly segments.

The new legislature in Jammu and Kashmir will have 90 seats, seven higher than the previous Assembly.

Delimitation is a prerequisite for the conduct of Assembly polls – something which the authorities and the political class are looking forward to as they seek to kick the political process into a higher gear, an objective which, along with speeding up of development, is expected to dominate the agenda of the meeting.

The leaders of the Gupkar alliance, a group of seven parties led by Farooq Abdullah and Mehbooba Mufti, have said to forcefully raise the issue of Article 370 with PM Modi and they have “no red lines” for any discussion during the meeting.

The all-party meeting is taking place alongside reports that National Security Adviser Ajit Doval met with his Pakistan counterpart in a third country.

In the last 22 months, Kashmir has gone through the world’s longest Internet blockade, strict curfew for months and an unprecedented clampdown in which thousands of people were jailed to prevent any protest against the abrogation of Article 370.

Before the historic changes, Jammu and Kashmir was India’s only state with its own separate constitution and flag.

The BJP and the central government defended the decisions saying they would bring prosperity and development in a “Naya (New)” Kashmir.

Kashmiri leaders have said that they would stick to their stand on the restoration of special status.

“I am here as I’m invited (to join the All-Party Meeting called by Prime Minister Narendra Modi). The statehood of Jammu and Kashmir should be restored,” Jammu and Kashmir National Panthers Party’s President, Bhim Singh, said after reaching Delhi.

People’s Alliance for Gupkar Declaration (PAGD), a group of five parties in Jammu and Kashmir, are also present in the meeting.