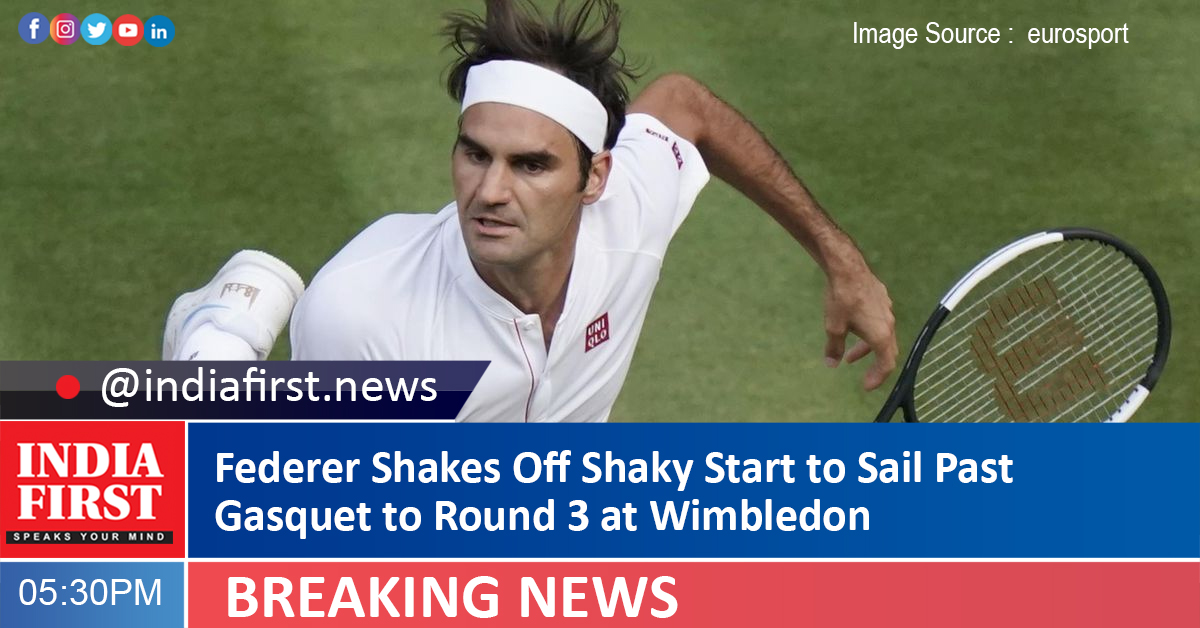 Zverev and Berrettini advance, too, but not Dimitrov and Nishikori.

Eight-time champion Roger Federer advanced to the third round at Wimbledon with relative ease, getting the better of Richard Gasquet in straight sets yesterday.

Sixth seed Federer, who along with Rafael Nadal has won 20 Grand Slam singles titles, the most in Open Era, overall seemed to be in good form as he defeated his French opponent, 7-6, 6-1, 6-4, spending nine minutes less than two hours at the Centre Court.

The Swiss maestro sent down 10 aces, had no double fault, and won 84% points on his-first serve. He also slammed 50 winners as compared to 20 by Gasquet.

Though the 39-year-old world No.8 had 26 unforced errors, Gasquet could not capitalise on that as he himself committed 23 of his own. Overall, it was a clinical display by Federer, who had finished runner-up here in 2019 and is hoping to claim his ninth title here.

Federer, who had undergone surgery twice on his troublesome right knee in 2020, gave the Australian Open a miss and lost in the fourth round at Roland Garros.

Earlier yesterday, the Wimbledon campaign of unseeded Japanese Kei Nishikori came to an end with his defeat to Jordan Thompson of Australia.

No.18 seed Grigor Dimitrov of Bulgaria too fell by the wayside yesterday. He was shown the door by Alexander Bublik of Kazakhstan, who won 6-4, 7-6, 7-6. The Kazakh slammed 34 aces to four by Dimitrov.

Spanish eighth seed Roberto Bautista Agut lost some steam after winning the first two sets in his second-round match. He advanced after winning a nerve-jingling five-setter against Miomir Kecmanovic of Serbia – coming through the bruising contest 6-3, 6-3, 6-7, 3-6, 6-3.

Earlier, World No. 6 Alexander Zverev defeated American Tennys Sandgren 7-5, 6-2, 6-3 in one hour and 45 minutes to advance to the third round. However, 13th seed Gael Monfils fell to Spanish Pedro Martinez in four sets.

The 24-year-old German, who is yet to win a Grand Slam title, converted five of the 10 break points.

The seventh seed Matteo Berrettini scored a hard-fought 6-3, 6-4, 7-6(4) victory over Botic Van de Zandschulp to advance to third round.

Although he could convert only two of the seven break points, he was still better than the Dutch player who failed to convert even one of his nine break points.

The 17th seed Cristian Garin of Chile reached the third round at Wimbledon for the first time in his career after he overcame Australian Marc Polmans 7-6(3), 6-2, 2-6, 7-6(5) in four sets.

Martinez surprised 13th seed Frenchman Monfils 6-3, 6-4, 4-6, 7-6(5) to advance to the third round. Though Monfils’s game was power-packed as he fired 21 aces as against six from Martinez and also won more on first serve, he still failed.