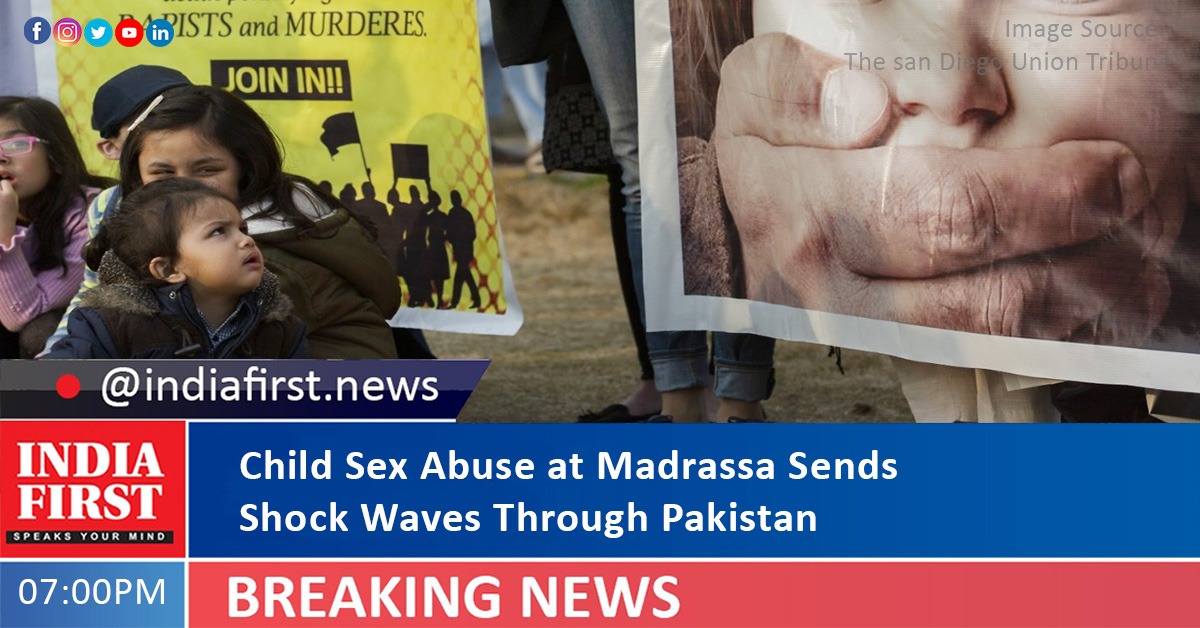 Religious leaders who hold major sway in Pakistan society and have often been found to paralyse the country demanding public hanging or punishment for culprits who insult Islam have this time around found themselves in a sticky situation as a child sex abuse incident inside a madrassa rocks the nation.

Sabir Shah, a student at a Lahore religious school stated that he was sexually abused by Mufti Aziz ur Rehman for over a year. Shortly after that, a video surfaced and went viral on the Internet, in which another child complained of sexual abuse involving a Shiite cleric.

Religious uproar on issues relating to blasphemy or any action that would be considered a deliberate attempt to ridicule Islam has more often than not paralyzed Pakistan with violent protests by hundreds of thousands of followers of religious leaders issuing clear and open threats to the government to meet their demands of capital punishment for such transgressors.

The recent statement by Prime Minister Imran Khan regarding less clothes on women would have a “sexual desirous impact on the men”, was seconded by many religious leaders and scholars, who said that Pakistani society is based on Islamic values, which do not allow women to wear less clothes in public.

The recent incidents cannot be considered as isolated events as in 2017, a nine-year-old boy was raped by a cleric in Pakistan’s Punjab province.

In 2018, another cleric was arrested and charged for raping a minor.

In 2019, a 13-year-old disabled girl was sexually assaulted by a cleric in Multan city of the Punjab province.

The list of such cases goes on and has kept increasing with every passing year, prompting for calls and demands of accountability.

People are blaming religious seminaries and the clerics for using the religious institutions for their vicious sexual desires, a claim that is vehemently rejected by the clerics, who refuse to concede that their educational institutions or clerics are at fault.

As per estimates, over 2.2 million children were enrolled in over 36,000 madrassas in Pakistan, majority of which belong to poor areas.

Experts say that many cases of child abuse by clerics in madrassas happen because the clerics know that the child’s claim was less likely to be believed.

“Some clerics target vulnerable children because they know that children’s claims of sexual abuse are much less likely to be believed. This prompts the children to not report such cases of sexual assaults,” said Dr. Naila Aziz, a clinical psychologist.

“This prompts and encourages clerics to go on doing what they do with impunity,” she added.

It is also a harsh fact that when it comes to accountability, the powerful political position of religious organizations and their clerics, saves them from being put through the accountability process as per the law of the land.

“They (religious clerics) teach the syllabus of their choice, collect funds and use them in their own ways. Whenever there is a case registered and a process of accountability is initiated against these clerics, they use their power and intimidation to stop it,” said Nasreen Jalil, former chairperson of the Senate Committee on human rights.

“This lack of accountability has encouraged them to commit crimes against children as well,” she added.

The other power tool that these clerics have is accusation of blasphemy against the person, who would try to probe deeper into such claims of sexual abuse.

“If any group tries to probe the matter, the clerics could use their powerful position to accuse them of blasphemy or of being a foreign agent,” said Mumtaz Gohar, national coordinator of Child Right’s Movement in Pakistan.

On the other hand, religious parties, clerics and their institutions blame that such claims of sexual abuse of children is targeted at defaming the religious practices at large by secular organizations.

“Religious madrassas have their own system of accountability, which does not tolerate such crimes. All clerics and religious parties have condemned such acts and demanded that those responsible should be brought to justice.

“Despite all that, some elements continue to tarnish the image of seminaries,” said Mohammad Nazir Farooqui from Maroof ul Quran madrassa in Islamabad.

The matter continues to be a seriously sensitive issue to debate in Pakistan as the power of these religious seminaries on the streets, the massive following of the senior clerics, political strength these clerics carry, which makes them desirable to every political party who wishes to come in power, is massive.

Any claim against a cleric is considered as an attack on the religion, and keeps accountability and probe into child abuse claims on very weak grounds.