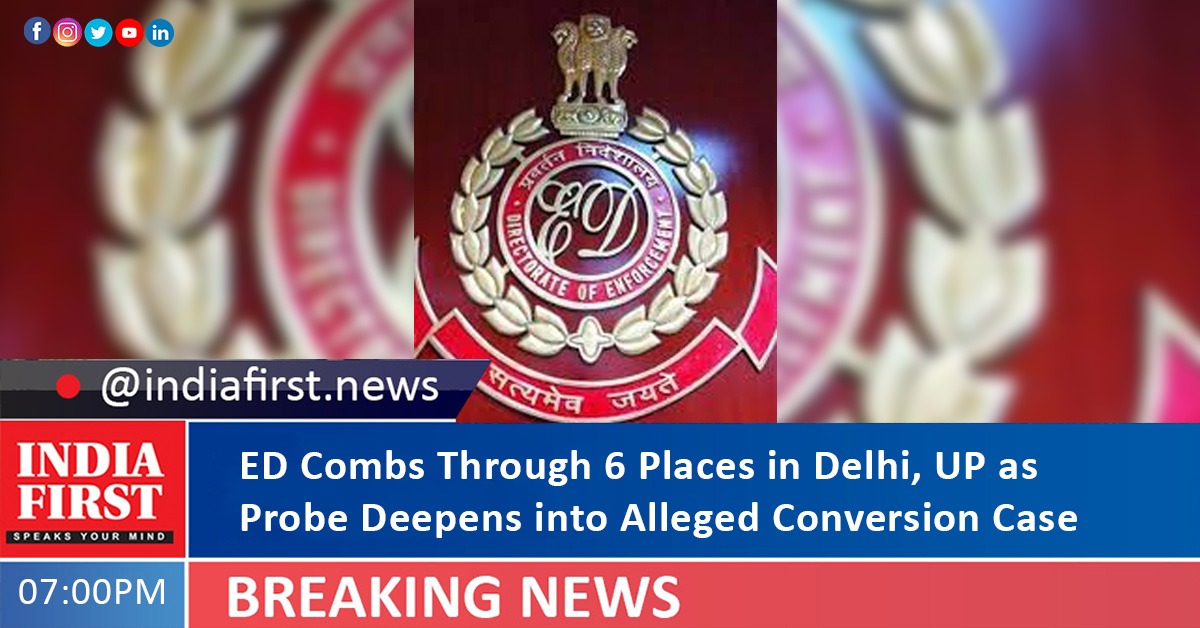 Days after the Enforcement Directorate (ED) registered a case of money laundering in connection with alleged religious conversion case, the financial probe agency is carrying out searches at six locations in Delhi and Uttar Pradesh.

According to ED sources, the agency sleuths are carrying out searches at the premises of Mohammad Umar Gautam, arrested in connection with the case in Delhi.

The source said that the agency is also carrying out searches at Gautam’s residential and office premises in South Delhi’s Jamia area and several locations in Uttar Pradesh.

The ED has registered a case of money laundering on the basis of the FIR registered by the ATS into the alleged conversion racket with its links from foreign countries.

According to ED officials, the agency has also named Delhi residents – Mufti Qazi Jahangir Qasmi and Gautam – as accused in the case, who were arrested by the ATS.

The ED is looking into foreign funding and money laundering angles in this case.

Following the arrest of the two Delhi men, Uttar Pradesh chief minister Yogi Adityanath has ordered action under the Gangster Act and National Security Act (NSA) against those involved in the conversion of the physically challenged children and youth.

The two men in Delhi’s Jamia Nagar were allegedly running an outfit involved in converting physically impaired students and other poor people to Islam in Uttar Pradesh with funding from Pakistan’s Inter-Services Intelligence (ISI).

The arrests were made following the registration of an FIR in the case at Lucknow’s ATS police station.

On June 28, Additional Director General of Police (Law and Order) Prashant Kumar told reporters that Gautam, who himself converted to Islam from Hinduism, boasted to the police of having converted at least 1,000 people to Islam, luring them with marriage, money and jobs.

“I converted at least 1,000 non-Muslims to Islam, marrying them all to Muslims,” Kumar quoted Gautam as saying.

The outfit that they ran is ‘Islamic Dawah Center’, having access to funds from Pakistan’s ISI and other foreign agencies, said the ADG.

He further said that the ATS had been working on the intelligence inputs that some people were getting funds from the ISI and other foreign agencies for converting poor people to Islam and spreading communal enmity in society.

The ATS probe has resulted in the duo’s arrest and they have been booked on various charges, including those under the Indian Penal Code and Uttar Pradesh’s stringent anti-conversion law.

The ADG said the arrested accused would be produced before the court and the police would seek their custody for further probe into the case.

The UP ATS has made several more arrests in the case.