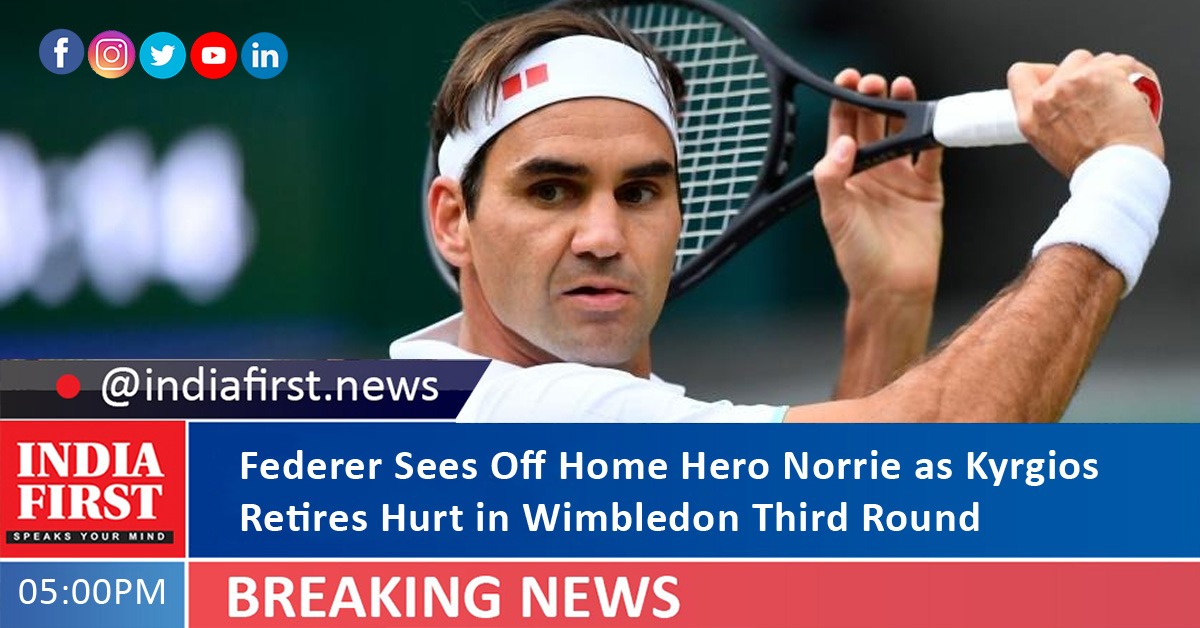 Swiss legend Roger Federer suffered a slight hiccup in the third set but overcame local challenger Cameron Norrie easily to seal a spot in the fourth round for the 18th time at the Wimbledon Championships.

Federer, the sixth seed this year and gunning for a record-extending ninth singles title here, was taken to four sets but eventually defeated Norris 6-4, 6-4, 5-7, 6-4 in two hours and 35 minutes on Centre Court. The win against the 29th seed Briton was the 1,250th of the Swiss legend’s illustrious career.

Flamboyant Australian Nick Kyrgios’s hopes were crushed as he was forced to quit in his match against Felix Auger-Aliassime of Canada with an abdominal injury. The score was 6-2, 1-6 for Kyrgios when he had to withdraw, the Australian playing only his ninth match of 2021, was seen grimacing after each shot in the second set after hurting his abs.

There problems of a different kind for Federer yesterday. It was the second time in three matches that Federer has lost a set in what is his 22nd campaign at this grass Grand Slam.

Federer was serving for the match in the third set, when he suffered a wobble and lost the set 5-7 to his 34-year-old opponent.

The 39-year-old Swiss, who now has 104 wins and 13 losses at Wimbledon, will next meet Italian 23rd seed Lorenzo Sonego in his quest for a record-breaking 21st Grand Slam singles title. Federer is tied with arch-rival Rafael Nadal at 20 titles.

Earlier, Sonega and seventh seed Matteo Berrettini of Italy progressed to the men’s singles fourth round on a rain-marred day.

Berrettini romped to a 6-4, 6-4, 6-4 victory over Aljaz Bedene of Slovenia in one hour and 41 minutes for his 100th tour-level win. The match was suspended for one hour and 31 minutes with scores tied 3-3 in the first set.

There was some more good news for Italy on Saturday as Sonego too made it to the fourth round – only the third time that two Italians have reached this stage in the history of the tournament.