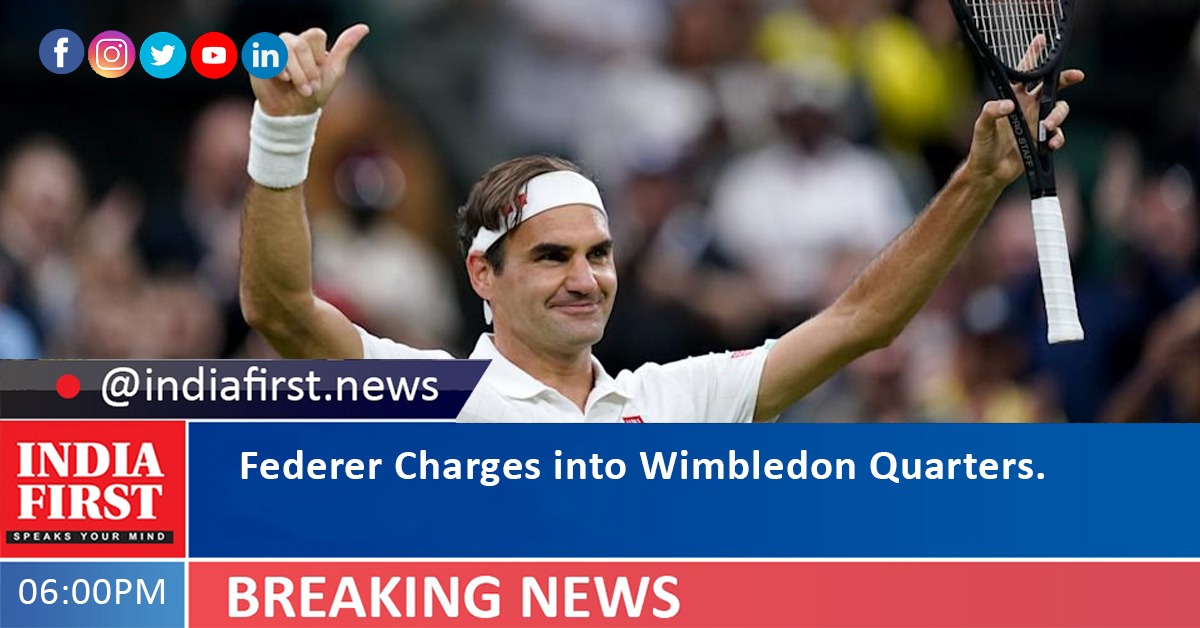 Swiss ace Roger Federer extended his dominance at Wimbledon, recording a 7-5, 6-4, 6-2 victory over Italy’s Lorenzo Sonego to reach his 18th quarterfinal at the All England Club.

The sixth seed, winner of eight Wimbledon titles, saved two of the three break points he faced in the match to book a place in his all-time record-extending 58th Grand Slam quarterfinal yesterday evening.

Federer will take on the winner of the match between second seed Daniil Medvedev of Russia and Poland’s world No. 14 Hubert Hurkacz whose match last evening was postponed due to rain.

World No. 19 Felix Auger-Aliassime of Canada came back from 2-4 down in the first and second sets, withstood an Alexander Zverev resurgence in the third and fourth set before defeating the fourth seed from Germany 6-4, 7-6(6), 3-6, 3-6, 6-4 and securing a quarterfinal berth.

The 20-year-old will face seventh seed Matteo Berrettini of Italy in the last-eight.

“But I felt like after that first set, I was able to control things. It was a great match. I couldn’t be more excited to be in the quarters. It’s a big moment and I’m very, very happy.”

The eight-time champion also extended his lead at the top of the all-time list for most Wimbledon quarter-final appearances, ahead of Jimmy Connors.

At 39 years and 337 days, Federer is the oldest man to reach the quarterfinals at Wimbledon in the Open Era, breaking the record set by Ken Rosewall (39 years, 224 days) in 1974.

Auger-Aliassime said after his five-set win over Zverev that it was a “dream come true”.

“It’s the biggest victory of my life, under a closed roof the atmosphere was amazing and I’m living this win with you,” Auger-Aliassime added.

“It was super difficult, knowing I have never beaten him, let alone won a set against Alex,” said Auger-Aliassime. “When he started to come back, I really needed to dig deep and without the fans it would have been a lot tougher.”