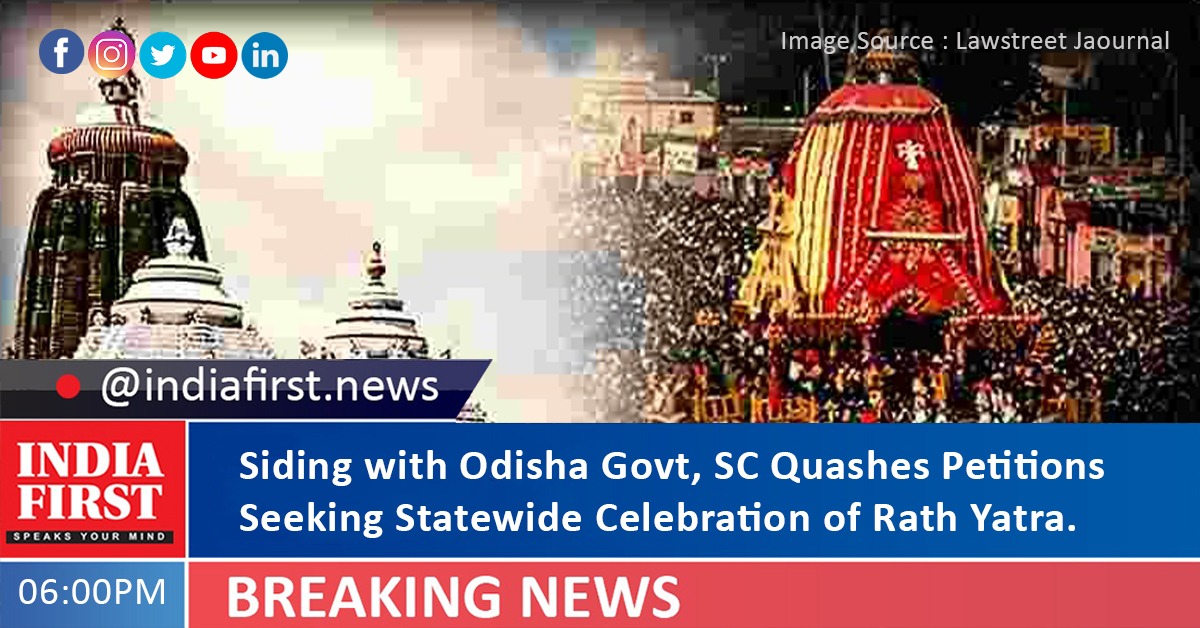 Declining permission to a statewide celebration of Rath Yatra of Lord Jagannath in Odisha, with only exception to the Puri Jagannath temple, the Chief Justice of India today revealed that he too has been waiting fervently to be part of the annual ritual, however, Covid-19 was still playing spoilsport.

In June, the Odisha government had said the Rath Yatra will be held on July 12 only in Puri following the guidelines issued by the top court, while banning it in all other places of the state.

A counsel appearing for a petitioner seeking the Rath Yatra at other places argued that Covid-19 situation is different now (number of cases have decreased).

The Chief Justice responded saying that nobody knows how Covid situation will be (in the future). To petitioners seeking the Rath Yatra in other places alongside Puri, the Chief Justice said: “You want to pray to the God. You can do it from home. I also wanted to go to Puri but I couldn’t in the last one and half years. This isn’t the time”.

Dismissing the petitions, Chief Justice N.V. Ramana observed: “Last year, a few people died, this year many people died (due to Covid). We hope God will allows us these rituals next year.”

A bench headed by the Chief Justice said the court agrees with the Odisha government order in the backdrop of the ongoing pandemic.

The Naveen Patnaik government submitted before the top court that it would be impossible for it to ensure the strict Covid protocol to be followed by thousands of devotees at temples across the state if the annual ritual was given the go-ahead.

The bench, also comprised of Justices A.S. Bopanna and Hrishikesh Roy, refused to allow the rath yatras in Baripada, Sasang and in other cities of Odisha.

On June 23, the Orissa High Court declined to entertain five petitions seeking permission to hold the festival of Rath Yatra in Kendrapara and Bargarh districts.

Last year, the top court had permitted the Rath Yatra on the condition that there would not be any public attendance and all entry points into Puri would remain closed.

The court had ordered that each of the three chariots, would be pulled by not more than 500 people who were required to test negative for Covid-19.

The Odisha government submitted before the top court it was practically impossible to impose conditions throughout the state as the second wave continues.

The counsel argued that this is the only yatra in the whole world, where 149 countries participate.

“I don’t want to say more,” the Chief Justice said, adding, “What can we do? I myself wanted to go…I cannot entertain. I also feel bad. I can’t help. I also want to see.”