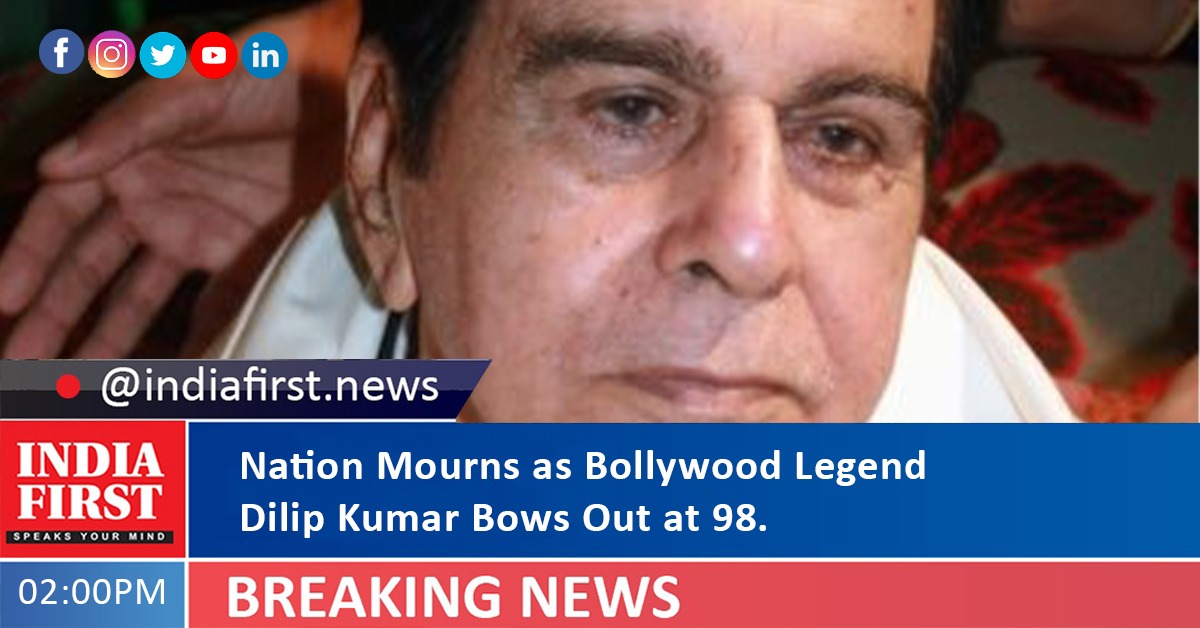 Veteran Bollywood actor Mohammed Yusuf Khan, world-famous as Dilip Kumar, passed away in the early hours in Mumbai, his family and aides said.

“With a heavy heart and profound grief, I announce the passing away of our beloved Dilip Saab a few minutes ago. We are from God and to Him we return,” said the thespian’s long-time aide Faisal Farooqui in a tweet.

Dilip Kumar had been admitted to the P.D. Hinduja Hospital on June 30 for a variety of age-related health issues. His wife Saira Banu Khan had earlier tweeted about his improving medical condition. But that was a short-lived glimmer of hope.

Farooqui said that the grief-struck family is discussing the funeral modalities and the last rites are likely to be held at the Juhu Muslim Cemetery in Santacruz west, around 5 p.m. this evening.

Prime Minister Narendra Modi offered his condolences over the demise of veteran actor, saying Dilip Kumar will be remembered as a “cinematic legend” and his death is a loss to the cultural world.

“Dilip Kumar Ji will be remembered as a cinematic legend. He was blessed with unparalleled brilliance, due to which audiences across generations were enthralled. His passing away is a loss to our cultural world. Condolences to his family, friends and innumerable admirers. RIP,” the Prime Minister said in a tweet.

Former Congress President Rahul Gandhi tweeted that the actor’s “extraordinary contribution to Indian cinema will be remembered for generations to come”.

Members of the Indian film fraternity, such as Akshay Kumar, Ajay Devgn and Jr NTR among many others, mourned the passing of the actor whose real name was Mohammed Yusuf Khan.

“To the world many others may be heroes. To us actors, he was The Hero. #DilipKumar Sir has taken an entire era of Indian cinema away with him. My thoughts and prayers are with his family. Om Shanti,” Akshay wrote.

Actor Ajay Devgn went down memory lane and recalled “many moments” shared with the late legend.

“Shared many moments with the legend…some very personal, some on stage. Yet, nothing really prepared me for his passing away. An institution, a timeless actor. Heartbroken. Deepest condolences to Sairaji #DilipKumar,” Devgn said.

Telugu star Jr NTR paid a tribute and said that the veteran thespian will be missed.

“Dilip Kumar Saab’s contribution to the growth of Indian cinema is priceless. Rest in Peace sir. You will be missed,” he wrote.

Actress Huma Qureshi says she is grateful to witness the late thespian’s work.

“How to mourn you @TheDilipKumar Saab … The Greatest … Ever … Grateful to have witnessed on-screen and be spellbound by your genius,” she tweeted.

Actor Riteish Deshmukh shared a picture with Dilip Kumar and his actress wife Saira Bano. He wrote a long note on Twitter thanking the late star for being his teacher.

Riteish wrote: “Every actor that faces the camera today will thank Dilip Sahab for being their teacher. Truly an institution. Am completely heartbroken today, will miss his pat on my back, his smile with a twinkle in the eye and fond kisses on my forehead. @TheDilipKumar”

He added: “Dilip Sahab – you will always be the king amongst kings. Greatest of all times. You were a hero to every generation. Rest in glory Sir. My deepest condolences to Saira ji, the entire family, loved ones and millions of fans across the globe.”

Actor Manoj Joshi wrote: “Saddened by the demise of #DilipKumar sahab, one of the greatest actors and a doyen of Indian Cinema. My thoughts and prayers are with his family.”

Actor Jaavd Jaaferi called Dilip Kumar an inspiration. “From God we have come and to Him is our return. The greatest Indian actor(in most opinions), legend, and #OG passes on. An inspiration and reference for most actors after him. Thankfully he will be alive in the wonderful world of cinema. Thank you and RIP #DilipSaab #DilipKumar,” he wrote.

Actor Tusshar Kapoor shared a poster of the film “Saudagar”, featuring Dilip Kumar, and said: “Words cannot do justice to describe your life in the movie business and your body of work, that very few can boast of! From Mughal-e-Azam to Saudagar, even my generation was spellbound by your magic on screen and over the audiences! RIP Dilip Saab! I’d rather not say more, for any homage to your life or career would be inadequate!”

Filmmaker Hansal Mehta called the late icon “the greatest mainstream actor India ever had or will ever have. There will never be another Dilip Kumar.”

Actor and comedian Rajpal Yadav shared a picture of Dilip Kumar on Instagram and shared that he will always remain an inspiration to all. “Dilip Sahab, you were and will remain an inspiration not only to artists, but to everyone. Very hard to accept that you are no longer among us Dilip Kumar sahab, but your memories will stay with us forever. My deepest condolences to Saira Banu ji and your whole family.”