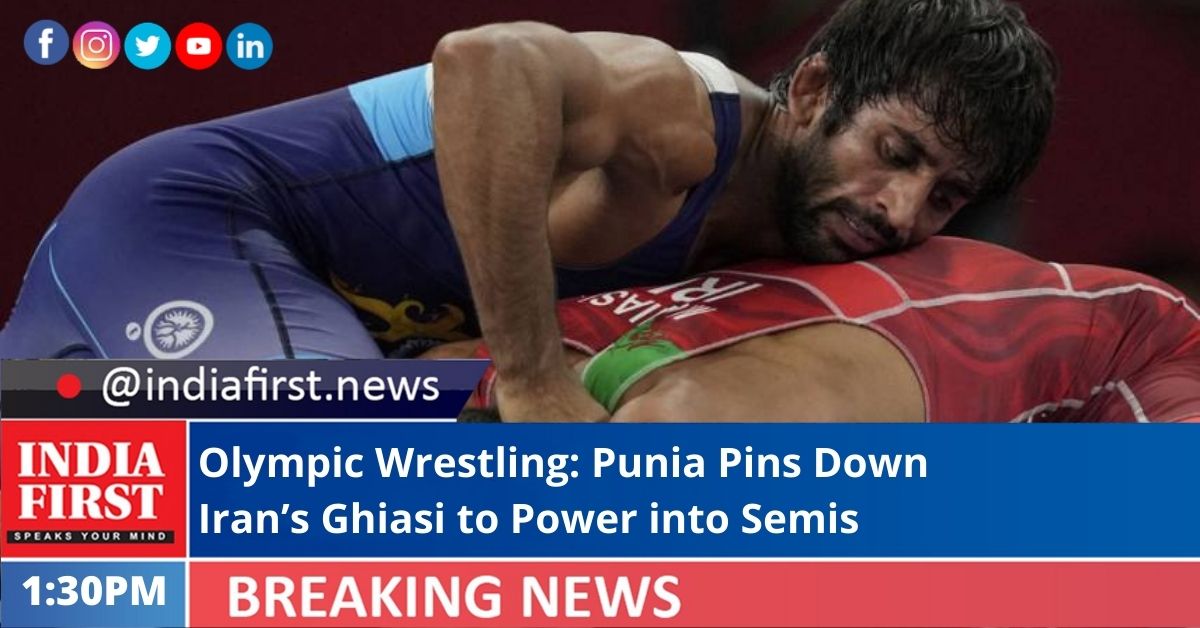 With the win over Ghiasi, Punia has been assured of a medal match at the Olympics. If the Indian gets through his semifinal bout, he will be guaranteed of a silver medal. If he loses, he gets to compete in the bronze-medal match.

Punia, who had survived a close Round-of-16 match, was early on the backfoot against his Iranian opponent. Ghiasi tried to attack his heavily strapped right leg, but could not. Punia conceded only one passivity point at the end of the first period.

In the second period, Ghiasi had the right-leg hold to pull off a takedown but Punia defended well. With the passivity clock against him, Punia made a turnaround by locking his opponent’s neck, moved him over to the mat and pinning his shoulders, thus earning a win by fall.

Punia will be up against Haji Aliyev from Azerbaijan in the semifinal. The 30-year-old Aliyev was a 2016 Rio Olympics bronze medallist in 57kg and a three-time world champion in 61kg. He is also a two-time European champion in the 65kg category.

Though they haven’t met internationally, the only meeting between the two came in the 2019 Pro Wrestling League. Punia defeated Aliyev 8-6 to give his side, Punjab Royals, a win against the MP Yodhas.

At the Tokyo Olympics, Aliyev defeated third seed Daulet Niyazkebov of Kazakhstan 9-1 to enter the last-four stage. In the Round of 16, he beat Adama Diatta of Senegal 4-0.

Earlier today, Punia had survived a scare to overcome Kyrgyzstan’s Ernazar Akmataliev in the opening Round-of-16 bout to set up a quarterfinal clash against Ghiasi.

Punia, 27, who is making his Olympic debut, earned his first point after a passivity penalty on his Kyrgyzstan opponent, Akmataliev.

Akmataliev levelled the score with a push-out but in the final moments of the first period, Punia surged ahead 3-1 with a takedown.

Early in the second period, Punia looked the more aggressive of the two grapplers but Akmataliev held his ground with a tight defence.

Towards the end, though, the Kyrgyzstan wrestler made his move and scored back-to-back pushouts to level the score at 3-3. Punia defended with all his might in the final seconds of the bout to not concede a point.

Despite the score being level at the end of the contest, Punia took the win since he had scored the highest-scoring move in the match – the two-point takedown in the first period.