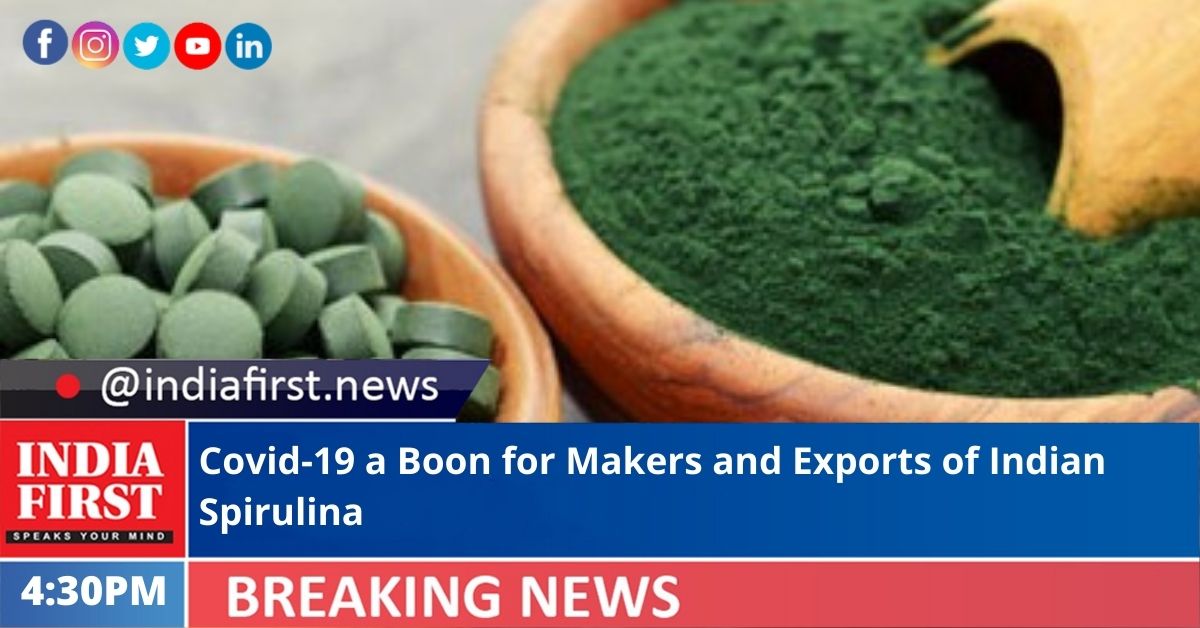 The spread of Covid-19 across the world has increased the demand for nutrition supplements in Europe and the US, which augurs well for manufacturers and exporters of the organic Spirulina – a blue-green algae and a nutrition supplement consumed as tablets or in a powder form mixed with juice.

Incidentally, American space agency NASA has recommended Spirulina for its astronauts going into space as it boosts the immune system.

Termed as a super food, Spirulina contains around 55 to 70 per cent protein, high levels of gamma-linolenic acid (GLA), beta carotene, several essential and non-essential amino acids, nucleic acids and others.

“The coronavirus spread has accelerated the awareness about Spirulina. Globally, Spirulina is slowly moving into other segments like beverages, bars. Some small companies use it in bakery products,” said S. Srikanthan, Brand Head, Nutraceutical, EID Parry.

The EID Parry part of the Murugappa group last fiscal earned about Rs.254 crore from its nutraceutical division.

In India also, there are some players who make nutri-bars with Spirulina, apart from selling it as tablets, capsules, powder, but the market, though now small, is expected to grow and is attracting newer players.

Based in Tamil Nadu’s Karur district, Prolgae Spirulina Supplies Pvt. Ltd is soon to hit the market with its Spirulina protein bar and sweetened Spirulina powder.

“We have been exporting our sun dried organic Spirulina to Europe. After Covid-19 there is increased awareness and demand for nutritional supplement food. In India we want to get into the consumer market launching protein bars and sweetened spirulina powder,” said S. Akas, Founder CEO, Prolgae.

According to Akas, an aeronautical engineering graduate, the two products will be launched on August 15 and talks are on with gyms to stock the products.

The products developed by Prolgae will be contract manufactured by the Delhi-based Swasthum.

However, the immunity booster product segment is wide including the age-old chyawanprash and new players have to find a positioning niche.

“We are also talking with the nutritionists about our product and its health benefits. We will launch the products in the four metro cities first and expand to other markets and also have our own e-commerce site,” Akas added.

“Globally about 8,000-10,000 tpa of Spirulina is manufactured. In India we are the largest player with about 700-800 tpa production. We produce organic premium Spirulina,” Srikanthan said.

According to him, the Parry Nutraceuticals-division of EID Parry- has about 30 per cent market share in the global premium organic Spirulina market.

Tamil Nadu is one of the major producers and exporters of Spirulina with players like EID Parry, Sanat Products part of Schwabe group, Prolgae Spirulina and others.

There are several smaller players whose products go to other sectors like fish/poultry feed and others.

“The high-end product will be about 2,000 tpa of which our market share will be about 30 per cent. In India we are the largest player with about 700-800 tpa production. We produce organic premium Spirulina,” Srikanthan said.

According to Akas, Prolgae’s sundried organic Spirulina gets about Rs 1,300-1,500/kg in the overseas market.

Though there are players from China and other countries, the issue is to make organic Spirulina free of heavy metals.

“The product is subject to several variables like quality of water, nutrients used to grow the algae, environment near the algae ponds and others,” Srikanthan said.

Hence, scaling up the production to a large extent so that Spirulina could be made available in large quantities at cheaper rate is an issue faced by the players.

“We are investing in science, looking at alternate manufacturing processes where it can meet the food industry demand,” Srikanthan said.

He expects major beverage players looking at drinks with Spirulina.

On its part, Prolgae is expanding its production to touch about 1,500 kg/month by adding more ponds at its facility.