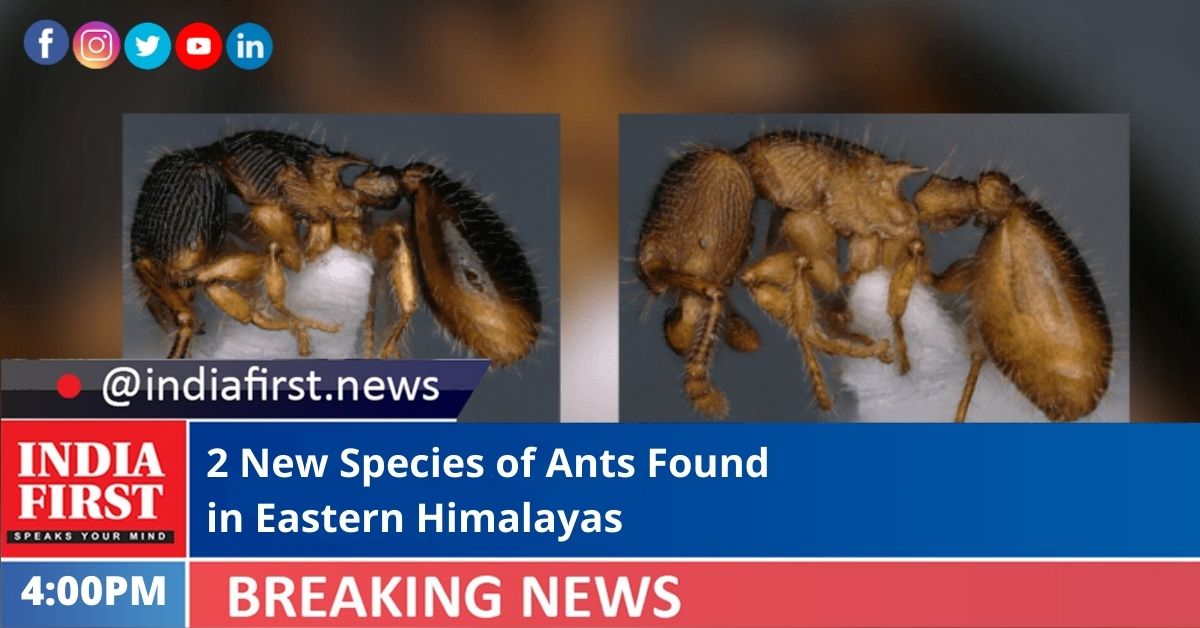 Entomologists from Bengaluru-based Ashoka Trust for Research in Ecology and Environment (ATREE) have discovered two new species of rare ants, from the Eaglenest Wildlife Sanctuary (EWS) in Arunachal Pradesh.

This new discovery was published in the latest issue of the journal ZooKeys.

As the ATREE is celebrating its silver jubilee in 2021, one species is named as Parasyscia ganeshaiahhi in honour of one of its founders Prof. K.N. Ganeshaiah, an eminent ecologist, thinker and writer who was instrumental in establishing the Insect Taxonomy and Conservation Laboratory in ATREE.

“The collection site sits deep inside the forest at an elevation of 1400 m above sea level where there are no signs of anthropogenic disturbances. Parasyscia ganeshaiahi is unique from all its congeners in India with its remarkable yellowish brown coloured body and 11-segmented antennae,” he explained and added that the other species, being the first record of that ant genus from India is named as Syscia indica.

Elated over his team’s discovery, Priyan explained that all other Parasyscia species in India have 12-segmented antennae.

“Parasyscia are small, cryptic ants that usually nests in decaying logs or under rocks. With the present discovery, the genus consists of 52 valid species, distributed in Afrotropical, Australasia, Indomalaya, Malagasy, Oceania and Palearctic biogeographic regions. In India, seven species of Parasyscia were known before and six of them are reported endemic to the region. This is the first time the genus has been recorded from Arunachal Pradesh, Northeast India,” he claimed.

He said that the new species of ants were located in the Himalayan foothills of West Kameng District of Arunachal Pradesh, the Eaglenest Wildlife Sanctuary which is a haven for ecologists, nature enthusiasts and adventurers. “Hidden behind the Pakke Tiger reserve and Tenga Army Cantonment area, the steep hills of EWS stretches across 218 square kilometres. These hardly disturbed forests harboured between an elevation of 500m to 3250m from the sea level, conceals many surprises to the ecologists,” he said.

While another author of this discovery, Aswaj Punnath said that Syscia are rare ants usually encountered in leaf litter, rotting wood, and soil habitats. “In Asia, Syscia has been known from China, Japan, Sri Lanka and Thailand. The genus lacks any verified record in India. Hence the present discovery of Syscia indica from Arunachal Pradesh marks the first record of this rare ant genus from India,” he added.

The team claimed that with the present discovery, 39 valid species of Syscia are known in the world.

“Syscia indica is a blind ant with a reddish-brown coloured body and numerous, relatively small, closely-spaced punctures. The species was found deep inside the Eaglenest Wildlife Sanctuary at an elevation of 1600 m above sea level and named in reference to India,” the researchers said in their paper published in the latest issue of the journal ZooKeys.

The entomologists further stated that a large number of ants live hidden beneath the leaf litter and many have a secret lifestyle.

“Many such litter ants are still elusive to science. The newly discovered subterranean ants are rarely encountered in the field and are therefore hard to collect. We used the non-conventional method, the Winkler extractor -where the forest litter and debris are collected, sifted and filtered through a large cloth funnel – for collecting these ants,” the researchers explained.

Priyan added that the ATREE entomologists have collected more than 200 species of ants or almost 25 per cent of Indian ant fauna from EWS, which includes several new taxa and new reports to India. “Extensive exploration of the Eastern Himalayan region in the future, especially by using non-conventional collection methods, would help us to find more such rare ants,” he said.

The senior research fellow also acknowledged that Dr W.S. Udayakantha from the University of Kelaniya, Sri Lanka provided vital information about closely relates species to confirm the studies. “This study was supported by the Department of Biotechnology (DBT, Government of India), National Mission on Himalayan Studies (MoEF&CC, Government of India) and John D. and Catherine T. MacArthur Foundation,” he stated.