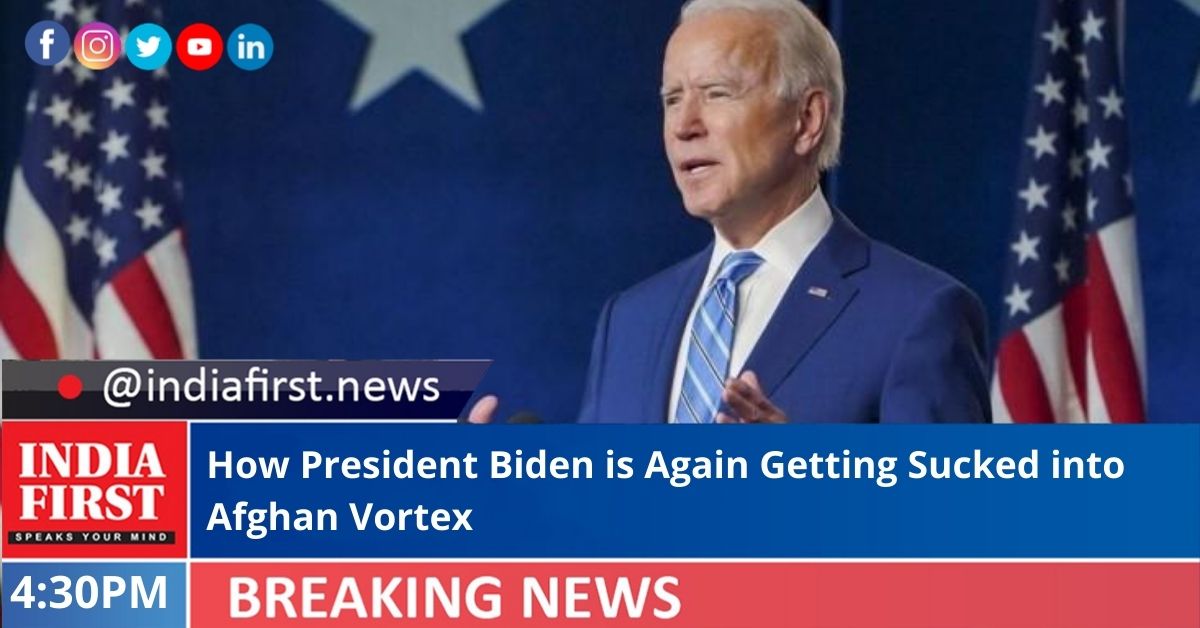 Trying to emerge from a 20-year quagmire in Afghanistan, US President Joe Biden risks tipping over into another with his vow to “hunt down” those behind the Kabul airport suicide bombings that killed at least 103 people, including 13 American service members.

“To those who carried out this attack, as well as anyone who wishes America harm, know this: We will not forgive. We will not forget. We will hunt you down and make you pay,” he declared in an address to the nation yesterday evening.

The suicide bombing at the entrance to the Kabul airport was carried out yesterday by the Islamic State-Khorasan (ISIS-K) group, a radical affiliate of the IS.

The blast at the airport was followed by another one at the adjacent Baron Hotel, whose details are being figured out by the US military.

In an odd turn of events in Afghanistan, which the US had invaded in 2001 fighting the Taliban, General Kenneth McKenzie, who heads the US Central Command, outlined the cooperation with the Taliban to prevent terrorist attacks on American troops and using “the Taliban as a tool to protect us as much as possible”.

The ISIS-K attack was a show of defiance against the Taliban, which has claimed control of Kabul and most of Afghanistan on August 15 when the elected government collapsed after President Ashraf Ghani fled to the United Arab Emirates.

Although the extremist ISIS-K is by no means a democratic organisation, in the confounding Afghan scenario it is fighting the Taliban.

But they also share a mutual opposition to the US, while as an insurgency within an insurgency it is questioning the Taliban’s claims of iron-fisted control of the country.

US military personnel who died in the attack were manning a post at an airport entrance.

About 18 Americans and 140 others were wounded in the bombings.

Even though the Taliban occupies Kabul and most of Afghanistan, the US military still controls the airport to enable the evacuation of American citizens and the tens of thousands of others, many of whom had worked with Washington.

US and allied officials have been warning of terrorist threats and Washington had asked its citizens not to head to he airport until they were asked to go there.

The latest killings brought the total number of US military personnel who died in Afghanistan since 2001 to 2,325.

In his tribute to them, Biden said they were inspired by the Bible.

He said: “When the Lord says, ‘Whom shall I sendawho shall go for us?’ And the American military has been answering for a long time: ‘Here am I, Lord. Send me’.”

Yesterday’s deaths of US service personnel were the first in that country since last September and the first due to hostile action since February 2020.

Biden stuck to the deadline of August 31 he had set for pulling out the troops even though he vowed to go after the perpetrators of the bombings.

But he is caught between not letting the US casualties increase by withdrawing the troops and his call for revenge.

Biden’s speech had an eerie echo of former former President George Bush’s September 20, 2001, address to Congress when he set the course for what became the 20-year war.

“I will not forget this wound to our country or those who inflicted it. I will not yield; I will not rest; I will not relent in waging this struggle for freedom and security for the American people,” Bush had said.

To exact his revenge on ISIS-K or whoever was behind the attack, Biden would need the cooperation of the Taliban or will have to defy it.

The Taliban has said that it will hold the US to the August 31 deadline.

In either course, Biden faces the risk of being sucked again into the Afghanistan vortex.

“With regard to finding, tracking down the IS leaders who ordered this, we have some reason to believe we know who they are, not certain, and we will find ways of our choosing, without large military operations, to get them,” he said.

Ironically, the US had invaded Afghanistan in 2001 to oust the Taliban for sheltering the Al Qaeda which carried out the 9/11 attacks on the US but is now cooperating with the insurgents in protecting the airport, a lifeline for those fleeing the war-torn nation.

McKenzie told reporters that the terror attacks had been expected and the US had been working with the Taliban to head them off.

Efforts to prevent terrorist attacks “includes reaching out to the Taliban., who are actually providing the outer security cordon and around the airfield, to make sure they know what we expect them to do to protect us”, he said.

He said that US collected information using imaging systems on helicopters and drones about anyone in the area who could pose a threat.

McKenzie credited the Taliban with thwarting some attacks and said that the US shared some information with it to prevent them.

Facing the risk of vehicle bombs, McKenzie said: “We’ve reached out to the Taliban. We tell them you need to continue to push out the security perimeter. We’ve identified some roads that we would like for them to close. They’ve identified that they’ll they will be willing to close those roads.”

As for getting US citizens to safety after the US troops are withdrawn, the President said: “We will continue, after our troops have withdrawn, to find means by which we defined any American who wishes to get out of Afghanistan. We will find them and we will get them out.”

Secretary of State Antony Blinken said on Wednesday that the US had evacuated 4,500 Americans and their families and about 1,500 were still there.

The US had evacuated about 83,000 people in all from Afghanistan as of Wednesday, according to the Defence Department.

But tens of thousands of others who had worked with the US or were family members of those who had are still stuck there.