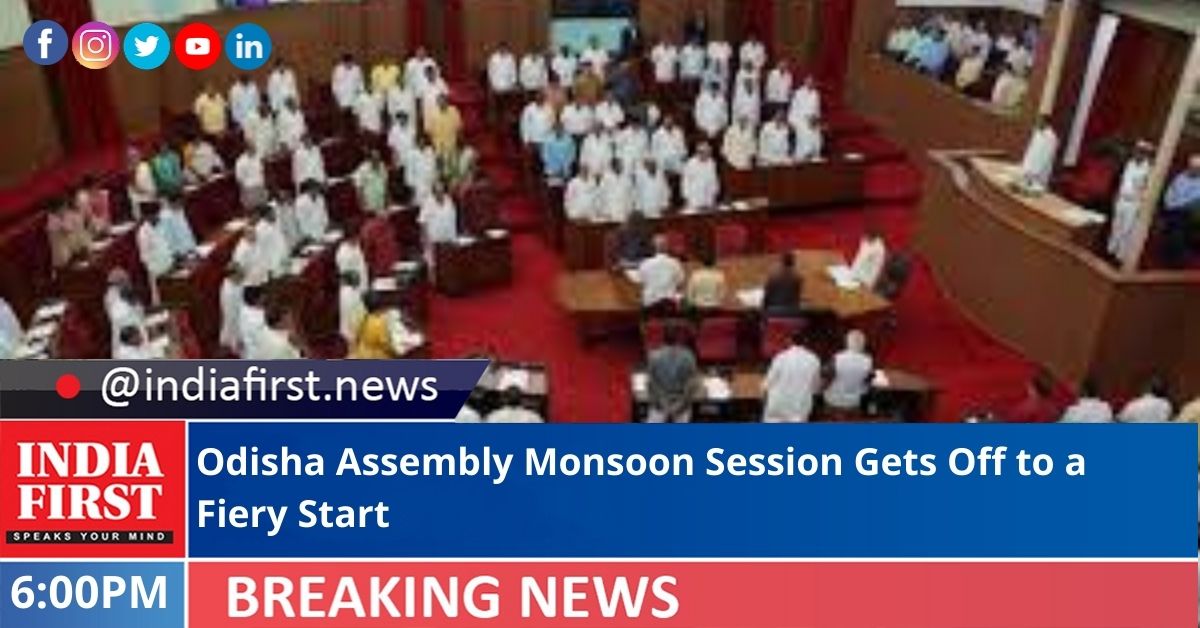 The Monsoon Session of Odisha Assembly began yesterday with adherence to all the Covid-19 protocols.

The Leader of Opposition, Pradipta Kumar Naik, who is undergoing treatment for post-Covid complications, joined the session virtually from the AIIMS Bhubaneswar.

Even though he was unable to speak clearly, Naik participated in a motion moved by the Chief Minister to pay obituary references to the departed MLAs and Covid warriors.

“I haven’t recovered fully, but my priority will always be to sincerely carry out the responsibilities people have bestowed upon me. I will attend the Assembly session virtually from the hospital and draw the attention of the Odisha government towards all the issues of the public,” the BJP leader tweeted.

The first day of the Monsoon Session witnessed several adjournments as the opposition BJP and Congress members created ruckus over the prevailing drought-like situation in the state.

As soon as the question hour began, Congress members rushed to the well of the House and disturbed the proceedings. They were demanding suspension of all business of the House to conduct a special discussion on the drought-like situation in the state.

As Speaker S.N. Patro rejected their proposal, they disrupted the House proceedings. The House was then adjourned till 12.34 p.m.

Later, the Speaker allowed discussion on an adjournment motion moved by the opposition on the same issue.

Following a heated debate on the issue, the House again witnessed uproar in the post-lunch session as the opposition members raised questions on the reply made by Agriculture Minister Arun Kumar Sahoo. They asked why the Agriculture Minister replied to the House instead of the Revenue Minister, who is in-charge of the concerned department.

BJP chief whip Mahon Majhi said the government has failed to create sufficient irrigation facilities for the farmers and is blaming nature to cover up its own failure.

“The state government had promised to provide irrigation facility for at least 35 per cent of the land in each block. Has the government been able to achieve it,” he asked.

Majhi demanded immediate declaration of drought in the affected areas and formation of a task force to prepare a long-term action plan to mitigate possible droughts in near future.

Terming both the state government and the Centre as anti-farmers, the Congress legislative party leader Narasingha Mishra said that at least 27 out of the 30 districts in Odisha have been affected by severe drought. Therefore, all these districts should be declared as drought-hit as per the norms, he said.

“The government is not giving any emphasis to the irrigation sector. The irrigation projects, which were started by the then Congress government, have not been completed till now. The Centre is responsible for this as it has not provided funds for the project,” Mishra said.

The Congress leader also demanded to waive all crop loans for the farmers.

In his reply, the Agriculture Minister said, “Drought or drought-like situation is a natural disaster, it is not man-made, as it occurs due to climate change. The state witnessed droughts eight times in the past 20 years,” he said.

Sahoo informed the House that till August 28, as many as 23 districts of the state received deficient rainfall. As many as 15 blocks of 11 districts have received scanty rainfall (less than 59 pert cent) as per field-level reports condition of the crop is worse than normal in 47 blocks in 14 districts, Sahoo stated.

In view of the drought-like situation, he said directions have been issued for preparing a Contingency Crop Plan, repair and operationalise lift irrigation points, distribute pump sets at subsidised prices and take up digging of more farm ponds through MNREGS in the affected areas.