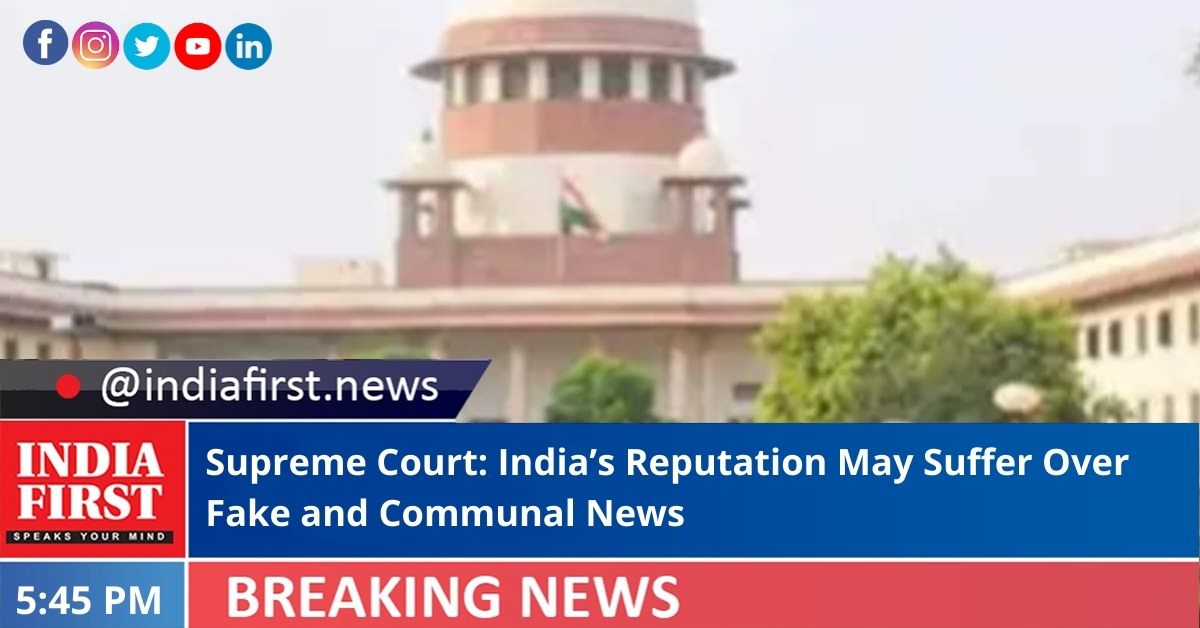 The Supreme Court has expressed deep concern over web portals, and YouTube channels publishing fake news, slandering reputations in the absence of a regulatory mechanism, and also broadcast of communal news by a section of media. The top court emphasized if this were to continue unchecked then it may get a bad name for the country.

A bench headed by Chief Justice N.V. Ramana said: “On web portals, there is no control of anybody, they can publish anything…If you go to YouTube, you will find how fake news is freely circulated and anyone can start a channel on YouTube.”

The bench also comprising Justices Surya Kant and A.S. Bopanna observed that the content shown in a section of private media bears a communal tone. “The problem is that everything in this country is shown with a communal angle by a section of the media,” noted Justice Ramana.

He told Solicitor General Tushar Mehta, “Ultimately, this country is going to get a bad name. Have you made an attempt for a self-regulatory mechanism (for these private channels)?”

Mehta submitted before the bench that Centre has come out with new Information and Technology rules, which address concerns flagged by the top court. He added that many petitions have been filed challenging the new rules in various high courts.

Mehta contended that the Centre has filed a plea to transfer all these petitions to the Supreme Court. Mehta added: “Not only communal but also planted stories. These portals can even put fake news”.

The Chief Justice added that the social media platforms do not respond if an issue is raised in connection with the content.

“I have not come across any public channel, Twitter, Facebook or YouTube … they never respond to us and there is no accountability, about the institutions they have written badly about, and they don’t respond and say this is their right,” said the Chief Justice. He further added this is the condition of institutions and forget the individuals.

Mehta replied, “This is what is taken care of under the IT rules”.

Chief Justice added, “Do not know who to approach…they are only concerned with the people who are powerful… judges, common man, they are not bothered.” He added, “This is what we have seen”.

Mehta submitted before the bench requesting it to transfer the plea before it which deals with the IT rules. “Your lordship can have a holistic picture as it is an all-India issue”, he added.

The top court made these sharp observations during the hearing of Jamiat Ulama-i-Hind petition seeking action against media reports accused of “communal branding of Covid” linked to the Tablighi Jamaat gathering at Markaz Nizamuddin in the national capital.