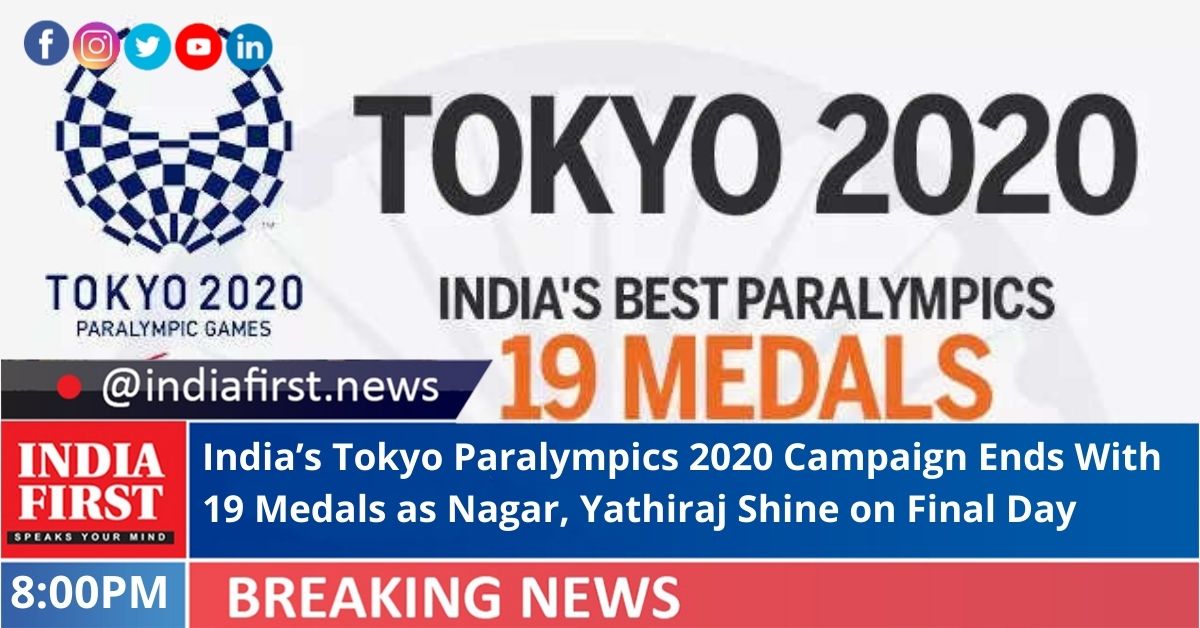 India ended the Tokyo 2020 Paralympic Games with 19 medals – five gold, eight silver, and six bronze, a dramatic and historic rise for the country that had collected only 12 medals while participating in 11 editions of the Games from 1968 till 2016.

Today, on the final day of the Tokyo Paralympic Games, India claimed two medals – a gold and a silver in badminton – and finished 24th among 162 nations in the overall medal tally on the basis of gold medal count, while it is placed 20th based on the number of medals (19) it won.

Suhas Yathiraj claimed a silver medal as he went down fighting to France’s world No 1 Lucas Mazur in three well-fought games in the final of the Men’s Singles SL4 class.

An IAS officer who is currently posted as the District Magistrate of Gautam Buddh Nagar in Uttar Pradesh, Yathiraj stunned the Frenchman, the three-time World Champion, in the first game and had handy leads in the second and third but Mazur was too experienced and too skilled and fought back from a game down to win 15-21, 21-17,21-15 in just over an hour to win the gold medal.

India was expecting five medals from para-badminton but that was not to be as Tarun Dhillion lost in the bronze medal match. Pramod Bhagat and Palak Kohli, the scratch mixed doubles pair that had never practiced together till a month before the Paralympic Games, also missed out on a bronze medal as it went down to Japan’s Fujihara Daisuke and Akiko Sugino 21-23, 19-21 in two close games.

Dhillon, the second Indian in the SL4 class, who had lost to Mazur in three games yesterday, failed to overcome the disappointment as he went down tamely 21-17, 21-11 to Indonesia’s Fredy Seitiawan to miss out on a bronze medal. Dhillon was the second seed in the SL4 class behind Mazur and expected to meet him in the final. But a loss to Seitiawan in the Group Stage meant he finished second in the standings and thus had to play the top seed Mazur in the semifinal.

There was disappointment in the Asaka Shooting Range too as Sidhartha Babu missed out on a place in the final of the R6 – Mixed 50m Air Rifle Prone SH1 by just 0.2 points. Babu finished ninth in the qualifying stage with a score of 617.2 while China’s Dong Chao took the eighth and last qualifying spot with a score of 617.4 points.

India had sent its largest-ever contingent of 54 para-athletes and participated in nine sports including badminton and taekwondo, which made their debut in Tokyo.