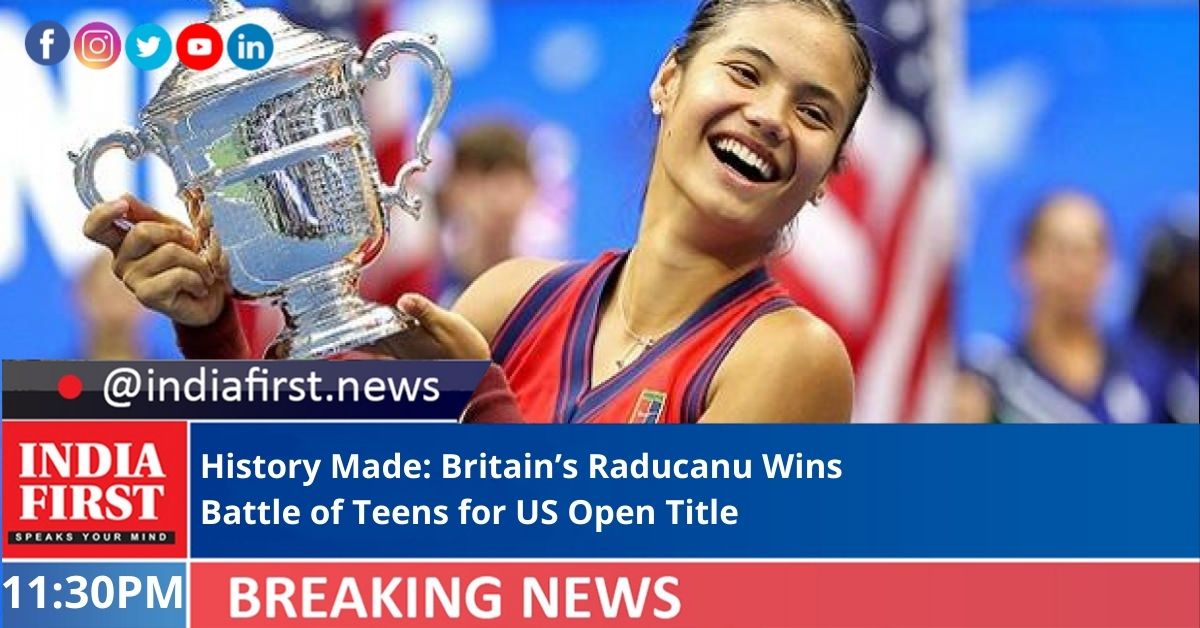 Great Britain’s Emma Raducanu, who had made her tour-level main-draw debut in Nottingham just three months ago, emerged the new US Open women’s champion, defeating 19-year-old Leylah Fernandez of Canada 6-4, 6-3 in an all-teenage final to win her first Grand Slam title and her first tour-level title overall today.

The 18-year-old British teenager had a perfect three weeks in New York. She made it through three rounds of qualifying without the loss of a set, was equally composed in her main-draw debut, where she also did not drop a set in seven matches.

She is the first woman to win the US Open without dropping a set since Serena Williams in 2014. Raducanu is also the youngest Grand Slam champion since Maria Sharapova of Russia won the 2004 Wimbledon aged 17.

Ranked world No.150, Raducanu is the lowest-ranked player to win the US Open title since an unranked Kim Clijsters of Belgium earned the first major of her comeback in Flushing Meadows in 2009. Raducanu is projected to reach a world ranking of 23 tomorrow.

She is also the first British woman to win a Grand Slam singles title in over 40 years. Virginia Wade triumphed on home soil at Wimbledon 1977, the year of the silver jubilee of Queen Elizabeth II.

Wade is the only other British woman to reach a US Open final in the Open Era, when the she won the first of her three Grand Slam singles titles in New York in 1968.

As she had in all of her previous matches here, Raducanu eased through two sets mixing power and precision that belied her lack of experience at this level. Against world No.73 Fernandez, Raducanu had 22 winners to Fernandez’s 18, while firing one fewer unforced error than the Canadian.

Fernandez continued to use her tremendous court coverage and timing to extend rallies past their breaking points and win games other players might not have, as she saved 14 of the 18 break points she faced in the match.

There were no more break points until 5-4, where Raducanu fired a backhand crosscourt winner to line up double set point. Fernandez fended off that pair, as well as a third, but on the fourth chance of another lengthy game, Raducanu slammed a forehand winner to notch the one-set lead.