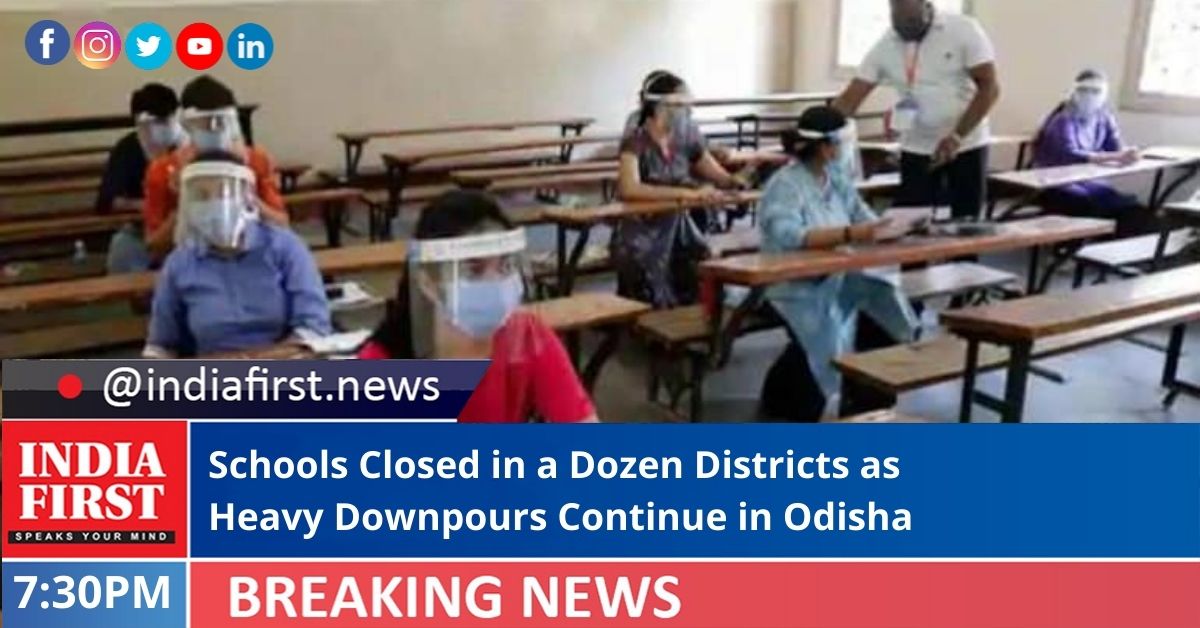 Heavy rainfall continued in many parts of Odisha for the past 24 hours, breaking old records in the capital city Bhubaneswar and pilgrim city Puri, the IMD said today. The government closed schools in 12 districts for two days.

The depression over northwest Bay of Bengal and adjoining Odisha coast intensified into a deep depression and crossed the coast near Chandbali in Bhadrak district today morning, India Meteorological Department (IMD) said.

It is very likely to continue to move west-northwest wards across north Odisha, north Chhattisgarh and Madhya Pradesh during next 48 hours, and weaken into a depression during the subsequent 24 hours, it said.

Under its influence, heavy rainfall occurred in coastal, northern and interior pockets of the State since Sunday morning. Highest 530 mm rainfall recorded at Astaranga in Puri district, followed by Kakatpur (525 mm), Balikda (440 mm) in Jagatsinghpur district, Kantapara (381 mm) in Cuttack district and Niali (370).

With 341 mm rainfall in 24 hours (till 8.30 a.m. of Monday), Puri recorded the highest rainfall in a day in 87 years during September, said Umashankar Das, a weather scientist at Bhubaneswar Met centre.

Similarly, capital city Bhubaneswar also broke a 63-year-old rainfall record in this month as the city witnessed 195mm rainfall. On September 9, 1958, the city had received 163 mm rainfall, he said.

Most of the streets in different parts of Bhubaneswar and Cuttack cities were waterlogged following the heavy rainfall. Flood water entered into various low-lying areas, including railway station and Kedargouri temple in Bhubaneswar. The rainwater also entered into Acharya Harihar cancer hospital in Cuttack causing problems for the patients.

Commissioner of Cuttack Municipal Corporation (CMC), Ananya Das said the water discharge at the cancer hospital is under way while dry food has been arranged for the people in the waterlogged areas. The Jagatsinghpur district administration has evacuated people from the low-lying areas to safer places, sources said.

The weather office advised people to avoid movement in the affected areas as there is a possibility of flash floods/water-logging in the low-lying areas. There will be a reduction in visibility that may cause traffic congestion in city areas, it said.

Meanwhile, the School and Mass Education Minister Samir Das said schools have been closed in 12 districts for two days (today and tomorrow) in view of the heavy rainfall warning.