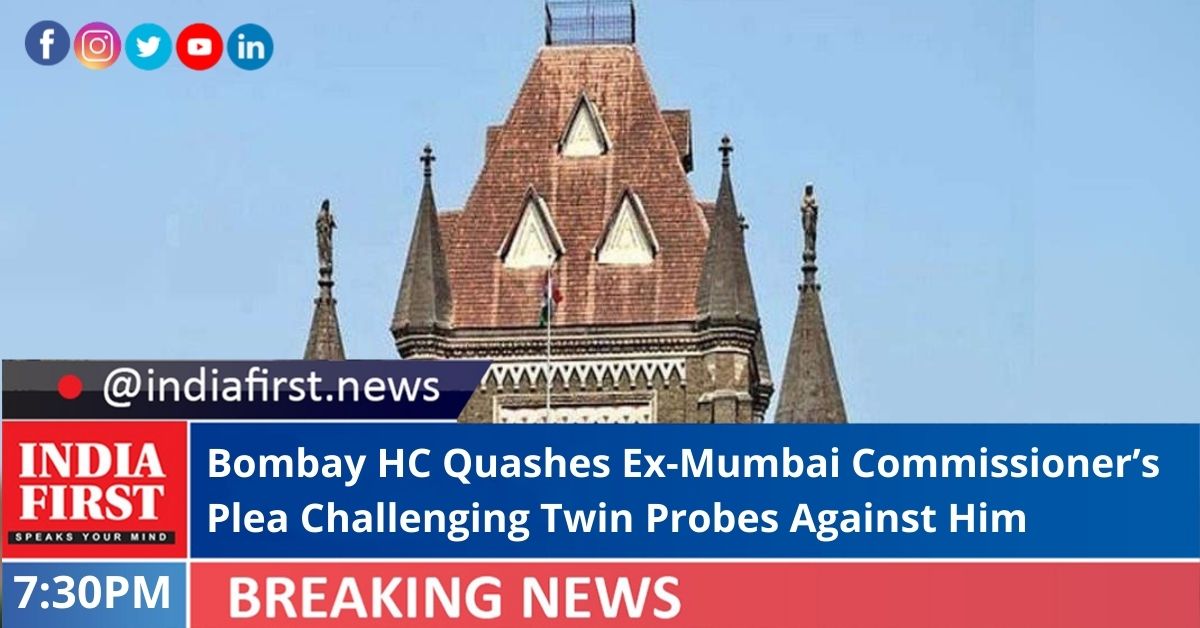 In a massive setback to former Mumbai Police Commissioner Param Bir Singh, the Bombay High Court today dismissed his plea challenging two probes launched against him by the Maharashtra government.

A division bench of Justice S.S. Shinde and Justice N.J. Jamdar said that the plea was not maintainable, and he could approach the appropriate forums which can decide the matter.

Singh had questioned the two inquiries initiated against him by the state Home Department on April 1 and April 20, for allegedly violating service rules and another over allegations of corruption, terming them “mala fide” and intended to target and harass him.

Calling himself a “whistle-blower” who sought to highlight corruption in the highest public office, he said that the probes came a month after he had accused the then Home Minister Anil Deshmukh of graft, extorting Rs 100 crore per month from Mumbai hoteliers through now dismissed Mumbai cop Sachin Vaze.

Objecting to Singh’s plea, the state, through senior advocate Darius Khambata, said that the Central Administrative Tribunal was the appropriate forum for Singh’s grievances as the enquiries were of administrative nature pertaining to his conduct as the Police Commissioner.

Senior advocate Mahesh Jethmalani representing Singh argued that these were criminal enquiries as there was a reference to the CrPC’s Section 32 and hence his only remedy was before the high court.

The probes pertain to violation of services rules in the sensational Antilia case and allegations of corruption levelled by policeman Anup Dange who accused Singh of shielding people with mafia links and that one of the top cop’s relative demanded a Rs 2 crore bribe to reinstate him in the police force.

Khambata further argued that Singh’s contentions on the maintainability contradicted his own plea in which he accepts that these are administrative enquiries and said writing letters would not “immunise” him from the same.

He also said that Singh’s primary grievance was to the Director General of Police Sanjay Pandey heading the probes and pointed out that Pandey had recused himself from the enquiries which have been assigned to different officers now.

Jethmalani’s contention, among other things, was that Pandey was an ’emissary’ of the government trying to convince Singh to withdraw his complaint and offering to mediate on the issue.

After he was posted as Commandant General of Home Guards, Singh had alleged in his letter that Deshmukh had fixed the Rs 100 crore per month collection target for Vaze.

Now dismissed, Vaze was nabbed in connection with the abandoning of a SUV with 20 gelatin sticks and a threat note near Antillia, the home of industrialist Mukesh Ambani in February, and the subsequent killing of the vehicle’s owner Mansukh Hiran in March.