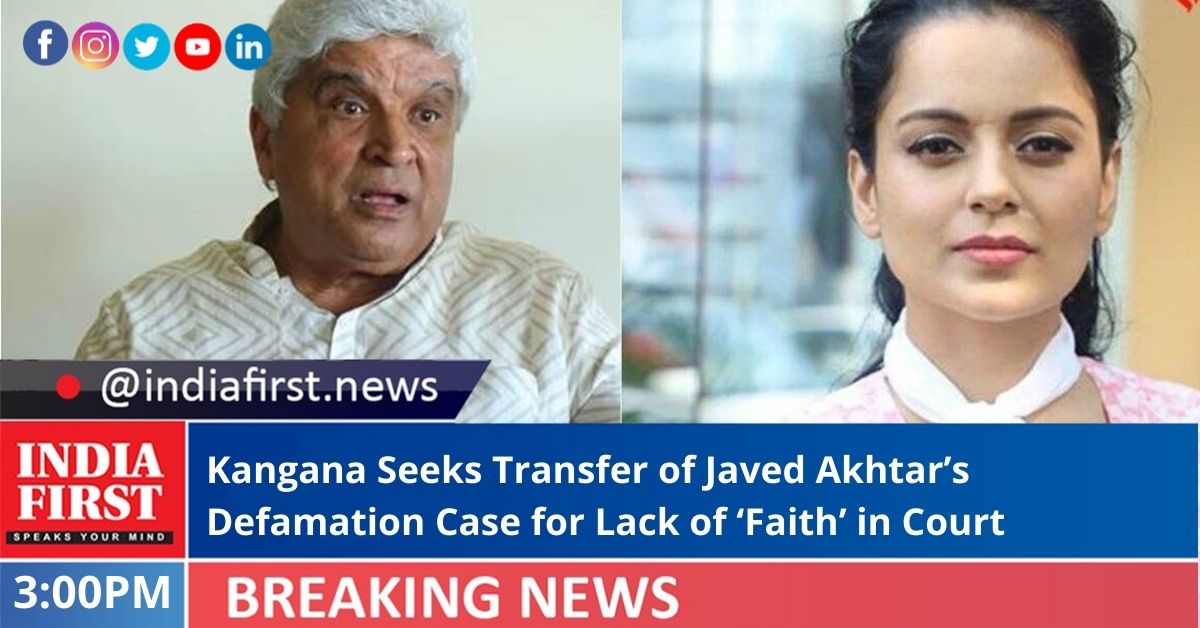 After receiving two warnings that an arrest warrant would be issued against her, Bollywood actress Kangana Ranaut finally appeared before the Andheri Metropolitan Magistrate’s Court in Mumbai yesterday in the defamation case filed by poet-lyricist Javed Akhtar. She said she has lost faith in the court and sought that the case be transferred.

Simultaneously, she has filed a counter-complaint against Akhtar in the Chief Metropolitan Magistrate’s (CMM) court alleging ‘criminal intimidation’ and ‘extortion’, said her lawyer Rizwan Siddiqui.

Siddiqui said that both the cases would now be heard by the CMM as the actress has lost ‘faith’ in Andheri Metropolitan Magistrate R.R. Khan.

Metropolitan magistrate Khan was scheduled to hear Akhtar’s plea yesterday in which he has accused Ranaut of sullying his reputation by dragging his name in Sushant Singh Rajput’s death case in an interview with the Republic TV on July 19, 2020.

Seeking the transfer, Siddiqui argued on the need for her appearance in a bailable, non-cognisable and compoundable offence, and since the court has said on multiple occasions that a warrant will be issued against Ranaut, she is not comfortable and has “lost faith” in the court.

Akhtar’s lawyer Jay Bharadwaj countered the argument, contending that Ranaut comes up with ‘bizarre’ reasons during each hearing, after which the magistrate adjourned the hearing to November 15.

After allowing Ranaut the final exemption from appearance on September 14, the magistrate had warned of issuing an arrest warrant if she failed to honour the summons (of February 1) at the next hearing, which took place on Monday.

In her counter-complaint before the CMM court, Ranaut has claimed that Akhtar called her and her sister Rangoli Chandel to his home with malafide intentions and ulterior motives during her row with actor Hrithik Roshan, and criminally intimated her to tender an apology to Roshan.

Earlier this month, the Bombay High Court had rejected her plea to quash the proceedings before the Andheri Metropolitan Court, while observing that the (Magistrate) has applied his mind and considered all aspects before summoning the actress to the court in the case filed by Akhtar.