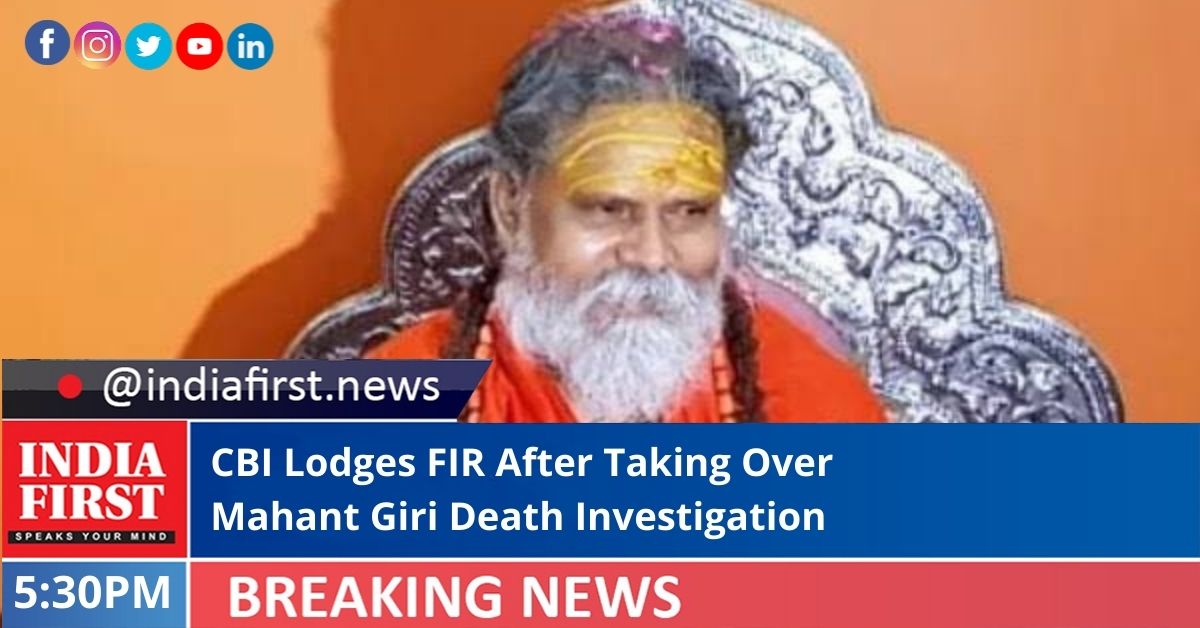 The Central Bureau of Investigation (CBI) has filed an FIR in connection with the death of Akhil Bhartiya Akhara Parishad chief Mahant Narendra Giri under mysterious circumstances, official sources in Delhi said.

A five-member team form the CBI arrived in Prayagraj yesterday to initiate the process of investigations.
The FIR was lodged after the Uttar Pradesh government recommended the CBI probe into Narendra Giri’s death.

The 72-year-old Mahant was found dead in his room at Baghambari Math on Monday. A preliminary autopsy report has revealed that Giri died of asphyxiation due to hanging.

According to an investigation by the Uttar Pradesh Police, the Mahant was last seen entering his room after lunch on Monday. In the evening, when his disciples knocked on the door, there was no response.

When his disciples broke the door open and entered the room, they found Narendra Giri hanging from the ceiling.
An alleged handwritten suicide letter was also recovered from the room in which Mahant Narendra Giri wrote his will and the names of a number of people who had been allegedly troubling him.

A major controversy erupted after his death when a number of seers termed the alleged suicide note as ‘fake’ and called out the Mahant’s death as ‘murder’.

Three people, Anand Giri, Adya Tiwari and Sandeep Tiwari have already been arrested by UP Police on charges of abetting the suicide of Mahant Narendra Giri.

Anand Giri, Adya Tiwari, head priest of Bade Hanumanji temple and Tiwari’s son Sandeep as all three were mentioned in the alleged suicide note left behind by the late Mahant.

In his last note, the deceased had held the three responsible for pushing him to commit suicide.

A video clip, taken immediately after the seer’s death, has gone viral on social media. The video clip further complicates the circumstances of his demise.

In the video, a yellow nylon rope that was allegedly used by the Mahant to end his life is seen cut into three parts. One part of the rope is around the seer’s next, another part is seen on the fan and the third part is lying on a table.

Interestingly, the fan is seen running at full speed when the police officials enter the room. A senior police official is heard asking the ashram inmates about who turned the fan on — the same fan on which the seer hung himself.

Sarvesh, who brought down the Mahant’s body after cutting the rope, said, “I don’t know who turned on the fan. Maybe it got turned on accidentally.”

A departmental probe has also been initiated by the Uttar Pradesh Police top brass against these personnel.
Anand Giri, who has been arrested for allegedly abetting the suicide of Mahant Giri, has already alleged that his security personnel, including Ajay Singh and Abhishek Mishra, are responsible for the death of the saint. He claimed that the security men had amassed wealth that was not in proportion to their income and needed to be investigated.