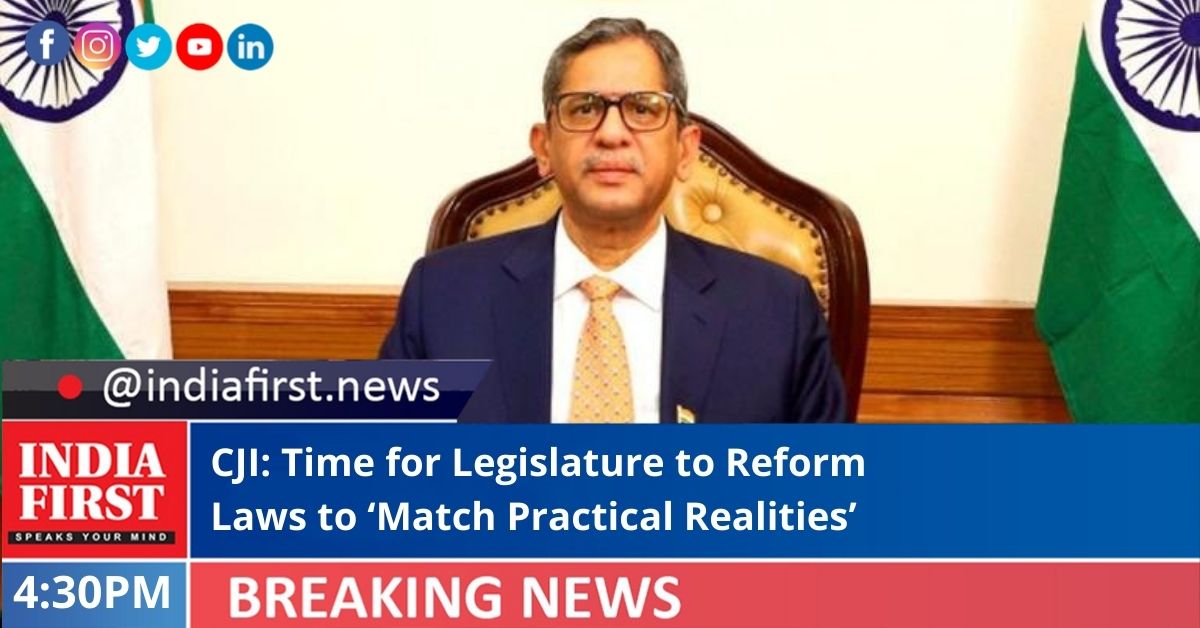 The Chief Justice of India, N.V. Ramana, has said that the legislature needs to revisit the laws and reform them to suit the needs of time and people.

He emphasised that if the executive and the legislature function in unison to realise the constitutional aspirations, the judiciary will not be compelled to step in as a lawmaker

Speaking at the inauguration of a new building of the Odisha State Legal Services Authority in Cuttack, Ramana said the legislature needs to revisit the laws and reform them to suit the needs of time and people. “Laws must match with our practical realities and the executive has to match these efforts by way of simplifying the corresponding rules”.

Emphasising that the executive and the legislature should function in unison, the CJI said, “It is only then, that the judiciary would not be compelled to step in as a law-maker and would only be left with the duty of applying and interpreting the same. At the end of the day, it is the harmonious functioning of the three organs of the state that can remove the procedural barriers to justice.”

He pointed out that even after 74 years of Independence, traditional and agrarian societies, which have been following customary ways of life, still feel hesitant to approach the courts.

Ramana said: “The practices, procedures, language and everything of our courts look like alien to them. Between the complex language of the acts and the process of justice delivery, the common man seems to lose control over the fate of his grievance. Often in this trajectory, the justice-seeker feels like an outsider to the system.”

Elaborating on Indianisation of justice delivery system as a primary challenge for the Indian judicial system, on which he had spoken earlier, Ramana said a harsh reality is that “often our legal system fails to take into consideration the social realities and implications”.

He said it is a general understanding of the people that it is the court’s responsibility to make laws.

“This notion has to be dispelled. This is where the role of other organs of the state, i.e., the legislature and the executive, assumes great significance,” Ramana said.

Elaborating on the second challenge, enabling the people to “decode the justice delivery system by raising awareness”, the CJI said the legal services have become an integral part of the judicial administration and lack of proper infrastructure and funds result in reduction of the activities carried out by these institutions.

“As a result, the number of beneficiaries, who avail services of these institutions, reduces. Ultimately, the goal of access to justice for all gets hampered. If we want to retain the faith of our people, we need to strengthen not only the judicial infrastructure, but we also need to boost our outreach programmes as well,” he added.

Ramana said considering the gravity of the challenge, “we have decided to launch a country-wide robust legal awareness mission in the upcoming week”.

Concluding his speech, the CJI said: “The power and strength of any justice-delivery system is derived from the faith of the people in it. The Bar and Bench need to work in conjunction to affirm the faith that a citizen has in the justice delivery system. We are mere custodians. I am sure that you will be able to make use of this grand edifice, for the service of the people.”