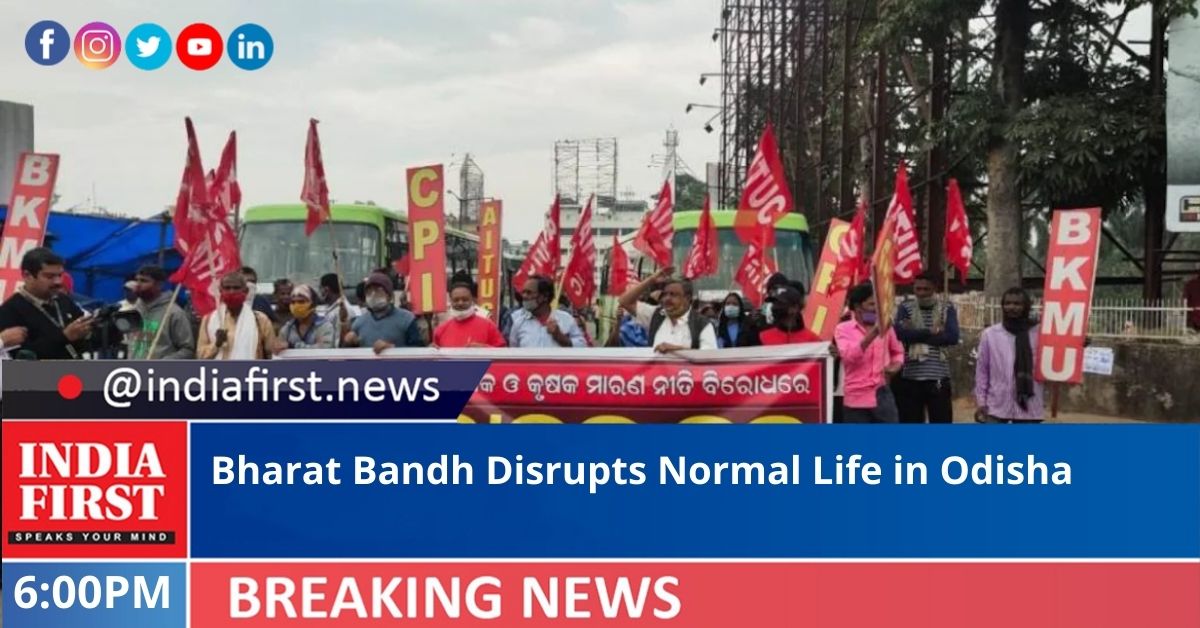 Normal life in different parts of Odisha was affected today due to the 10-hour-long Bharat Bandh.

In Odisha, the Congress party, Left parties and trade unions have supported the strike called by the Samyukt Kisan Morcha (SKM). Holding placards and banners, the agitators staged demonstrations at different places in capital city Bhubaneswar, besides Cuttack, Balasore, Rourkela, Khordha, Sambalpur, Bolangir and other districts in the State.

Hundreds of vehicles, especially trucks, were stranded on the NH-16 due to the blockade. The bus services of the State-run Odisha State Road Transport Corporation (OSRTC) have also been suspended from 6 a.m. to 3 p.m. Private bus operation was also suspended for the strike.

During the observance of Bharat Bandh, an agitator snatched away the key of a ‘Mo Bus’ in Bhubaneswar. The bus was initially intercepted by a protester, who then took away the key of the vehicle by opening the door. Later, police intervened and the agitators returned the key.

Due to the strike, people were seen waiting for buses and taxis in the major bus stands and railway stations.

“We have come from Kolkata this morning and are waiting here for a bus to our home town. However, after reaching here, we came to know about the strike. Now, we have to wait till evening,” said a lady passenger, waiting for a bus at Badambadi bus stand in Cuttack.

Claiming that the Bharat Bandh was successful, State Congress president Niranjan Patnaik said, “Demanding scrapping of three black farm laws, the farmers of the country have called for the Bandh and all opposition parties including Congress have supported it.”

The Congress demanded withdrawal of the three farm laws, make provision of MSP in Act and stop selling out of the vital infrastructures and properties of the country, Patnaik said.

“We are observing the bandh demanding the repeal of the three black farm laws,” said CPI leader Rama Krushna Panda.