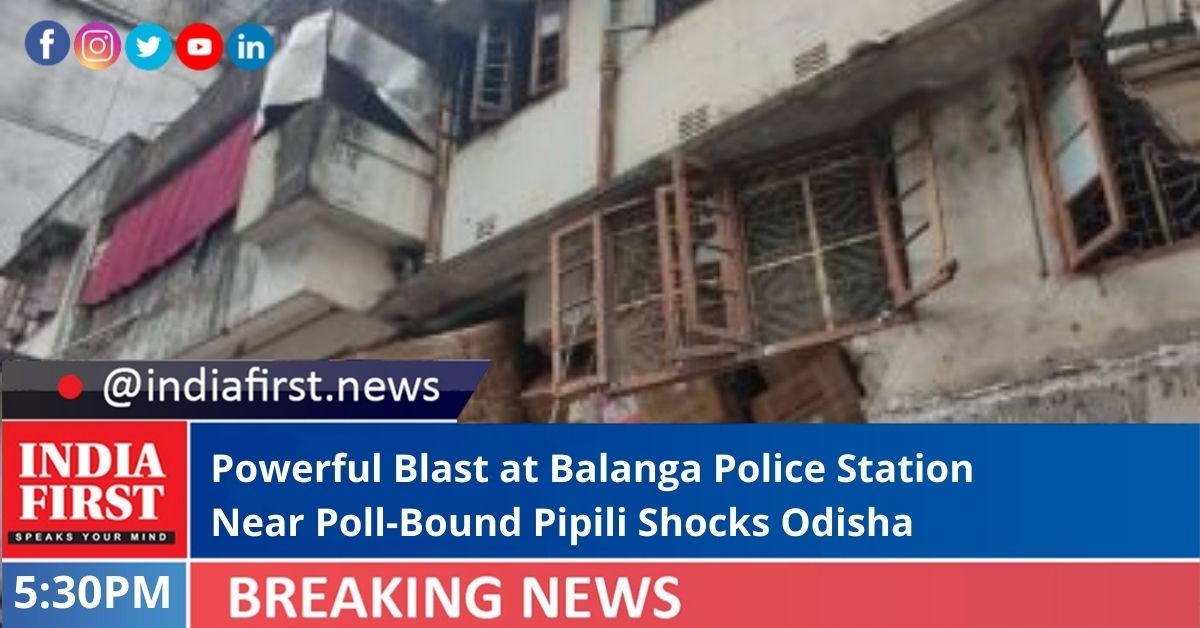 There was a massive explosion inside the Balanga Police station in poll-bound Pipili area of Odisha last midnight, police said today.

The Sentry of the Malkhana in the police station, Saroj Behera narrowly escaped the blast while the other staff were on by-poll duty, the police said.

Police suspect the blast may have been caused by the large cache of explosives seized and stored in the Malkhana following raids in different areas.

The explosion was so powerful that the entire office building collapsed while almost all the office items, documents, electronics items have been destroyed in the fire.

Central range IG Narasingha Bhola and Puri SP Kanwar Vishal Singh made a field visit to the police station to investigate it.

“All electric equipment and furniture of the building were damaged in the blast. There is no injury or casualty in the blast. We have initiated an inquiry into the incident. Additional SP, P. Pradhan has been asked to do a preliminary inquiry and submit a report today itself,” said S.P. Singh.

A detailed and thorough investigation will be conducted after analyzing all documents and reports, he said.

District-level scientific and bomb disposal teams have already reached the spot while a team from the State forensic lab will also investigate it, Singh said.

“If any police official is found guilty in the inquiry report, strong action will be taken against him. A lot of seized explosives were there. So, we have to find out the particular explosive that caused the blast and who was in-charge of that case,” said Bhola.

Following this blast, all police stations have been directed to either defuse the seized explosives or store them in a safe place to avoid such an incident, the IG of Odisha police said.

The police station will now run from a temporary building and very soon, fund will be sought to construct a new building for the PS, he added.

Meanwhile, BJP spokesperson Sambit Patra demanded an impartial probe into the incident. “Gang war and bombing has been reported in the Pipili area for a long time. Recently, a bomb was hurled at the BJP office at Satasankha, which was reported in the media,” Patra said.

“Where the police itself is not safe, how can they ensure the safety of the people?” he said.

In his reaction, senior BJD leader and minister Samir Dash said it was suspected that the explosion occurred due to the explosives seized in 2018 and solar batteries were also stored there. “There is no relation with the by-election to this incident,” Dash said.