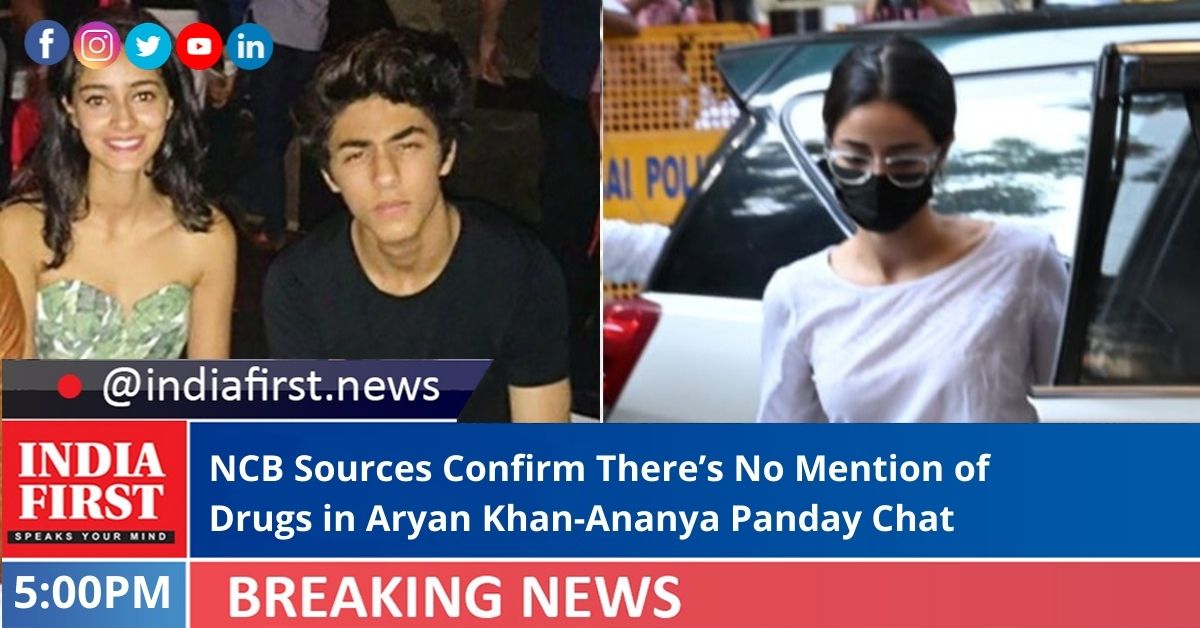 Despite the brouhaha over Ananya Panday’s grilling by the Narcotics Control Bureau (NCB), official sources hinted today that there is apparently no evidence of any ‘drug-related exchanges’ in her alleged WhatsApp chats with Aryan Khan, the son of Bollywood megastar Shah Rukh Khan.

The sources reluctantly divulged that there are ‘no traces or references’ of any Marijuana (Ganja) or weed-related chat in the two star-kids’ WhatsApp communication being scanned in-depth by the NCB.

More likely, Ananya is being questioned for her version by the NCB for some different leads it has collected in the case, but the officials decline to elaborate.

The latest disclosure comes in the wake of certain unconfirmed media reports claiming the emergence of at least three purported WhatsApp chats between the two star-kids allegedly discussing drugs, etc. which the NCB was probing now.

In a surprise addition to the ongoing investigations into the October 2 rave party raid aboard a cruise ship, the NCB ‘visited’ the home of Ananya Panday and slapped her with a summons.

Acting promptly yesterday, accompanied by her father and veteran actor Chunky Panday, Ananya went to the NCB and was questioned for over 2 hours by half a dozen officials, and was summoned again today.

The developments came even as a Special NDPS Court Judge V.V. Patil extended the judicial custody of Khan and 7 others arrested on October 3, till October 30. Khan’s bail plea will come up before the Bombay High Court on October 26.

Earlier yesterday, Shah Rukh Khan had made a high-glare visit to son Aryan in the Arthur Road Central Jail where he spent a few minutes with him, and later an NCB team ‘visited’ his Bandra bungalow, setting tongues wagging.

This prompted the veteran Bollywood actress and TV hostess Simi Garewal, 75, to come out in indirect support of Aryan, Ananya and others vide a cryptic tweet: “In a population of 1,397,642,731 – they can only find these 6 or 8 young Bollywood stars to target for drugs??”

Meanwhile, after nabbing at least 20 people till date in the cruise ship raid case, the NCB has not ruled out making further arrests as the investigations widen and progress.