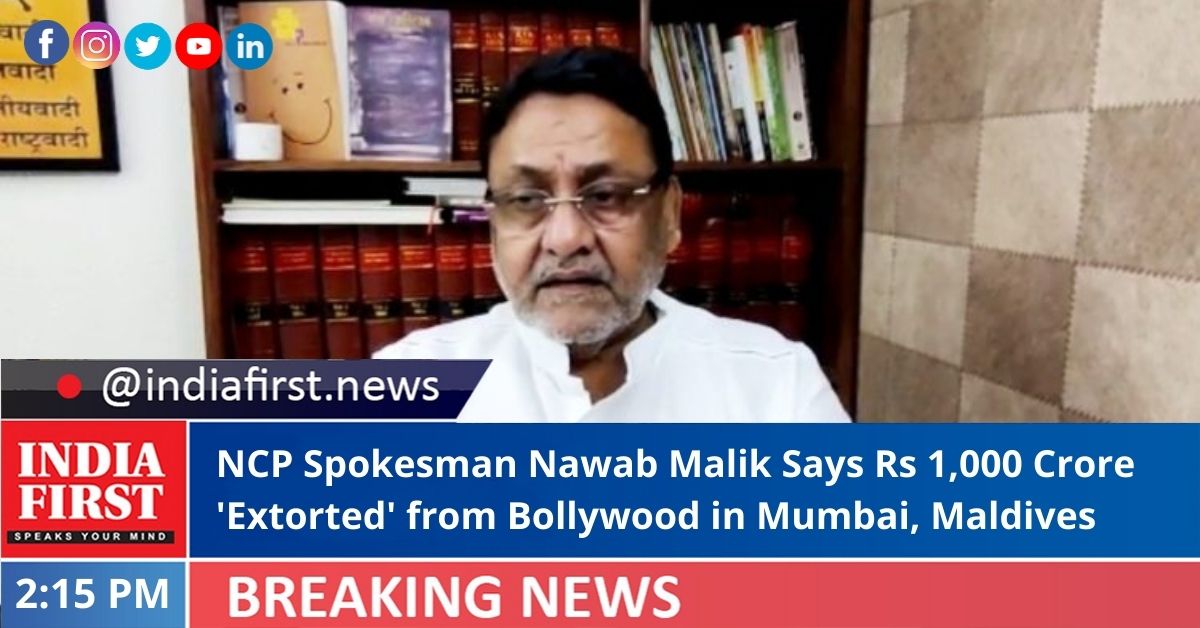 In another sensational disclosure, Nationalist Congress Party (NCP) national spokesperson and Minister Nawab Malik claims that at least an amount of Rs 1,000-crore has been ‘extorted’ in Mumbai and Maldives from Bollywood personalities.

Pointing the needle against the Narcotics Control Bureau (NCB) Zonal Director Sameer Wankhede, Malik released a 4-pager purported letter he received from a whistle-blower within the agency.

“My fight is not against the NCB… They have done a good job in the past 35 years… I am fighting against a person who has extorted money from people…My estimate is over Rs 1,000-crore. The NCB has already started a probe and they must look into the points raised in the 4-page letter,” Malik demanded.

Dismissing the charges by Wankhede and his family on the birth certificate which he revealed on Monday, Malik issued an “open challenge” to them to file any case or criminal defamation, he would face arrest and put the matter before the Courts.

Hitting back, a Bharatiya Janata Party activist Mohit (Kamboj) Bharatiya slammed Malik and said the 4-pager letter was a fake, even the affidavit submitted by a NCB ‘Panch-witness’ Prabhakar Sail was bogus and demanded the Minister’s immediate resignation for misusing his ministerial status.

“The Minister has been lying since day one… Sail’s affidavit was made at Malik’s behest… All this is done to malign the NCB and the BJP. I fear for my life and I demand security. I am filing a defamation case against him today,” Bharatiya told mediapersons.

Making another grave accusation, the Minister said that Wankhede has been illegally tapping the phones of two persons, one in Mumbai and another in Thane.

“I have their full details… and will disclose more at the appropriate time. How did the officer ask for the CDR details of my daughter Nilofer Malik from the Mumbai Police? Is she a criminal? The police have rejected Wankhede’s demands,” Malik said.

The Minister reiterated his charge that Wankhede has allegedly submitted a bogus caste certificate to get a central government job in a reserved category and vowed to bring out more dope on this.

“The BJP has been trying to portray it as a Hindu-Muslim fight… In my 45 years in public life, I have never played politics in the name of religion and the people know this well. But Wankhede has deprived a poor Dalit boy by grabbing his job in the reserved quota on the basis of fake documents,” said Malik.

The Minister further said that since his first expose in early-October, many people have been coming to him with information on the NCB, including a witness who said that the agency made him sign 50 blank papers.

On the contents of the 4-pager, Malik said that it has alleged details of about 26 different cases in which people have been deliberately framed by the agency, and how money was extorted.

“I am forwarding it to the NCB Vigilance Committee for proper investigations and hope the truth will come out,” he said.