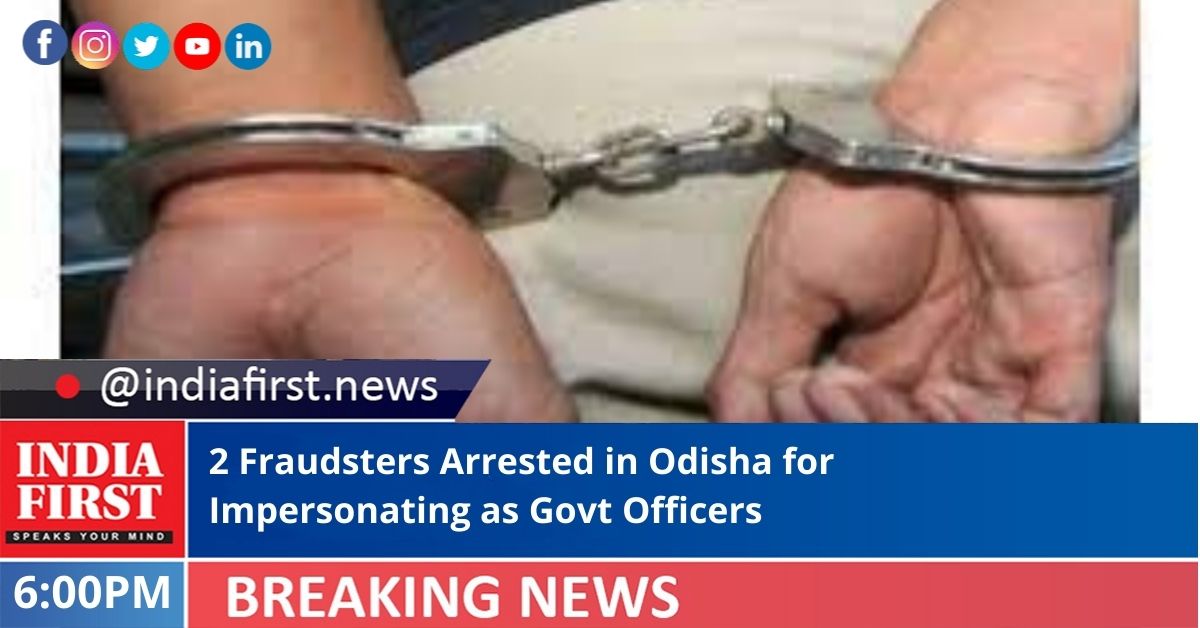 Odisha Police has arrested two fraudsters for impersonating as senior officers of Odisha government and cheated a businessman with Rs 1.17 crore.

The two accused were forwarded to the court of SDJM, Bhubaneswar yesterday.

Tripathy said accused Rajesh Gahlot, Suryamani Triapthy and Amit Kumar impersonated themselves as the officers of RAW, IAS and Odisha Works Department, respectively, and cheated Mukesh Jain and his son with the help of another lady who impersonated as treasury officer for Rs 1.17 crore.

They cheated the complainant and his son on the pretext of arranging/facilitating big government work orders/contracts.

In 2017, Mukesh Jain through one of his friends came in contact with Rajesh Gahlot, who introduced himself as an officer of RAW claiming several IAS officers as his friends, said the SP.

Gahlot subsequently introduced the complainant and his son Akshay to accused Suryamani Tripathy at Odisha Niwas, Chanakyapuri in New Delhi as an IAS officer, posted as additional secretary in the PWD (public works department).

Later, in January 2018, after being called upon by Suryamani for executing agreement with PWD, pertaining to work orders in favour of complainant’s firm, Mukesh Jain & his son came to the office of EIC, Bhubaneswar, where, Suryamani introduced another accused Amit as an executive engineer working with PWD, the SP further informed.

Both Suryamani and Amit took the Jain father-son duo to Bhubaneswar court and prepared the agreements on stamp papers and also got the documents/agreement papers purportedly signed by assistant engineer in the office of EIC (Civil), he said.

The EOW also found that the two accused called the complainant and his son to Bhubaneswar asking them to deposit a sum of Rs 25 lakh with government treasury for registering their firm for issuance of work order.

The Jain duo paid cash of Rs 25 lakh to one lady, who has been introduced as treasury officer. In return, Suryamani Tripathy handed over a fake treasury receipt in respect of Rs 25 lakh to the complainant, the EOW SP said.

“The accused persons went on collecting money under different pleas/pretext to expedite the process. Tripathy also handed over a fake letter addressed to branch manager, Axis Bank, Unit-IV, Bhubaneswar requesting therein to transfer an amount of Rs 1.52 crore and Rs.3.16 crore towards 20 per cent advance against the work order to the account of M/s Rashtriya Stainless Steel, Bhubaneswar,” the EOW said.

Accordingly, Akshay Jain gave two money receipts of Rs 4.68 crore but no amount was transferred to his account.

The SP said that when no work was assigned, the complainant started doubting the conduct of the accused persons and sought information under RTI about them and the work order so given to them, and came to know that all the documents including the treasury receipt are fake and so is the identity of the accused persons.

During investigation, the police found that accused Suryamani Tripathy has been working as a clerk in the office of DTET (directorate of Technical Education & Training), Cuttack, whereas Amit Kumar is unemployed.

“We have seized all fake work orders, agreements and treasury receipts. It is suspected that the accused might have cheated many other persons too. They used to use the Odisha Niwas, New Delhi to make any deal to impress/gain trust of the complainant,” the SP further said.

Investigation of the case is continuing to identify and nab the other accused persons involved in this case and in similar frauds, he added.