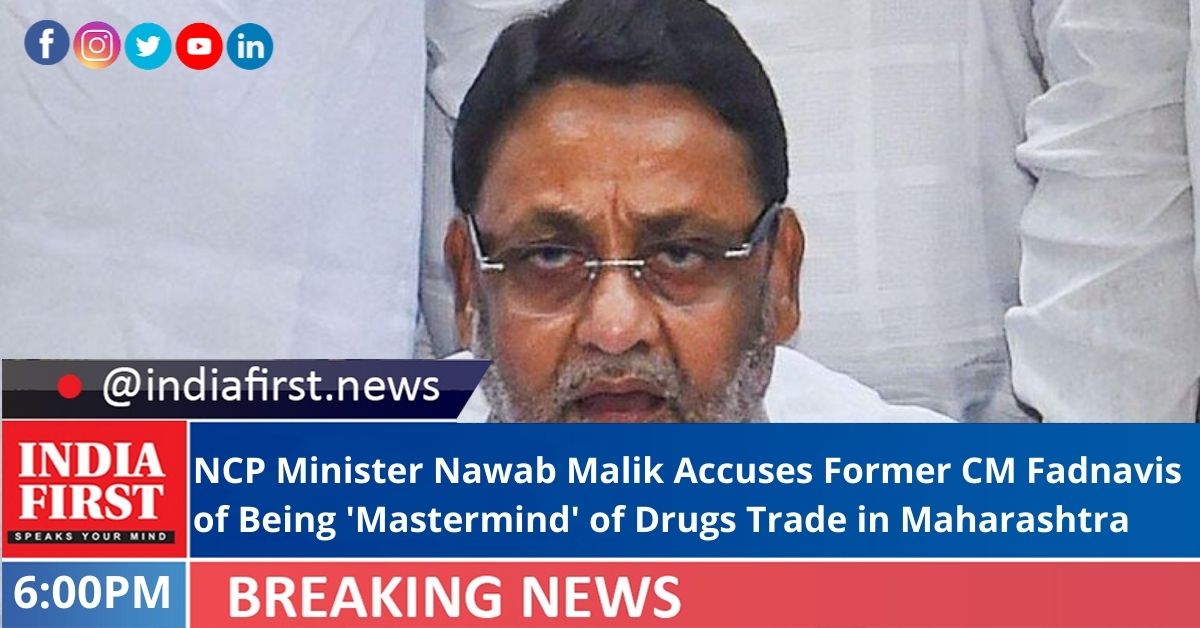 In a sensational development, Nationalist Congress Party Minister Nawab Malik pointed a finger at the Bharatiya Janata Party (BJP) Leader of Opposition Devendra Fadnavis saying that ‘he appears to be the mastermind’ of the illegal drugs trade in Maharashtra.

Addressing the media where he released photos of Fadnavis and his banker-artiste wife Amruta Fadnavis with an alleged drug dealer Jaydeep Rana, Malik demanded to know his connections with the couple.

“Jaydeep Rana is currently in jail for a drug trafficking case… He has close relations with the ex-chief minister Fadnavis and his wife Amruta Fadnavis. Jaydeep Rana was the finance head of the company producing the ‘Mumbai River Anthem (2018)’ sung by Amruta Fadnavis. The illicit drugs business in the state expanded during Fadnavis’ five-year tenure. We demand a CBI or judicial probe into this,” Malik said.

Hitting back, Fadnavis rubbished the allegations saying that ‘people living in glass houses should not throw stones’ and warned that “after Diwali, I will make a bomb blast”, while Amruta Fadnavis said in a suggestive tweet ‘vinash kale buddhi viprit’.

To both, Malik tweeted with a dare: “I am ready…”, while ruling ally Shiv Sena MP Sanjay Raut rushed to his support, demanding the BJP must respond to Malika’s latest expose on Fadnavis.

Elaborating, Malik said that it was Fadnavis who had brought the current Narcotics Control Bureau officer Sameer Wankhede and raised questions about one Neeraj Gunde who was very powerful during the former CM’s tenure.

“Gunde used to operate from the CM’s bungalow, visit the NCB offices and had free access to all other government offices… What were Fadnavis’ connections with Gunde…? He acted as an ’emissary’ of Fadnavis, but apparently had a hand in many other things, transfers, posting, etc.,” Malik asked.

Admitting that he had good relations with Gunde, Fadnavis shot back saying that even the Chief Minister Uddhav Thackeray enjoyed excellent relations with that person and asked Malik to take note.

Fadnavis said that after Diwali, he would make a ‘big blast’ on Malik’s alleged links with the underworld and submit all evidence to NCP President Sharad Pawar too.