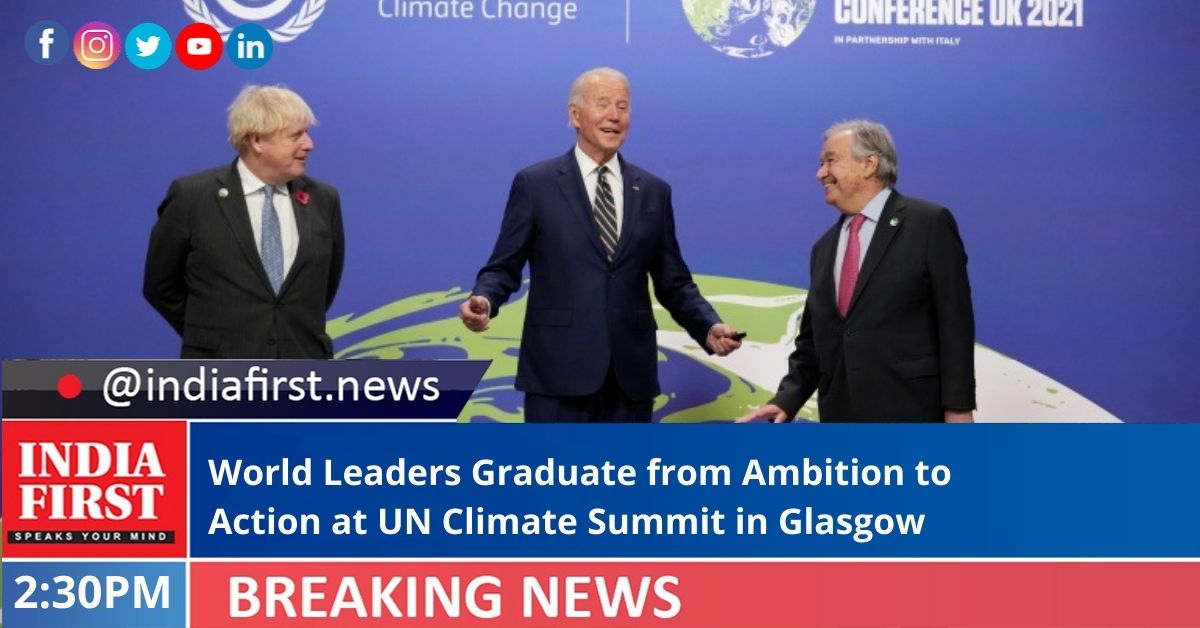 World leaders were in the UK for day three of the UN Climate Change Conference or COP26 on Tuesday where a wide range of announcements focused on signalling a clear shift from ambition to immediate action.

Amid powerful pleas heard in Glasgow on Monday, world leaders, young people and campaigners all stressed the urgency of taking tangible action to keep the prospect of holding back global temperature rises to 1.5 degree Celsius and building resilience to climate impacts.

A total of 114 leaders took a landmark step forward at a convening of world leaders on forests by committing to halt and reverse forest loss and land degradation by 2030. The pledge is backed by $12bn in public and $7.2bn in private funding.

Countries from Canada to Russia to Brazil – which also increased its Nationally determined contributions (NDC) on Monday – China, Colombia, Indonesia and Congo all endorsed the Glasgow Leaders’ Declaration on Forest and Land Use.

Together, they support 85 per cent of the world’s forests, an area of more than 13 million square miles which absorbs around one-third of global CO2 released from burning fossil fuels each year.

This announcement was bolstered with a commitment by CEOs from more than 30 financial institutions with more than $8.7 trillion of global assets, including Aviva, Schroders and Axa, committing to eliminate investment in activities linked to deforestation.

Yesterday was also the first time a COP in recent history hosted a major event on methane, with 105 countries, including 15 major emitters, including Brazil, Nigeria and Canada, signing up to the global methane pledge.

More than 35 world leaders have also backed and signed up to the new Glasgow Breakthrough Agenda that will see countries and businesses work together to dramatically scale and speed up the development and deployment of clean technologies and drive down costs this decade.

Signatories include the US, India, EU, developing economies and some of those most vulnerable to climate change – collectively representing more than 50 per cent of the world’s economy and every region.

The aim is to make clean technologies the most affordable, accessible and attractive choice for all globally in the most polluting sectors by 2030, particularly supporting the developing world to access the innovation and tools needed for a just transition to net zero.

Work will focus on five key sectors – power, road transport, hydrogen, steel and agriculture – which together represent more than half of total global emissions and further demonstrates how countries are moving from commitments to tangible action.

Leaders signed up to the Glasgow Breakthroughs also committed to discussing global progress every year in each sector starting in 2022 – supported by annual reports led by the International Energy Agency in collaboration with International Renewable Energy Agency and UN High Level Champions – and annual discussions of ministers across government convened around the Mission Innovation and Clean Energy Ministerials.

This ‘Global Checkpoint Process’ will seek to sustain and continually strengthen international cooperation across the agenda throughout this decade.

Leaders from South Africa, the UK, the US, France, Germany and the European Union have announced a ground-breaking partnership to support South Africa with an accelerated just energy transition.

As a first step, the international partnership has announced that $8.5billion can be made available over the next three-five years to support South Africa – the world’s most carbon-intensive electricity producer – to achieve the most ambitious target within South Africa’s upgraded and ambitious NDC.

A package of support, bringing together private sector finance and public sector expertise to scale-up African climate adaptation projects, providing life-saving support in the face of climate shocks protect the most vulnerable.

The Leaders raised the importance of adaptation to the impacts of climate change as a matter of survival. New countries came forward with adaptation communications, bringing the number of people covered by them and national adaptation plans to 2.3 billion.

COP26 President Alok Sharma said: “Forests are one of our best defences against catastrophic climate change, and essential to keeping 1.5C alive. This historic commitment will help end the devastating effects of deforestation and support the developing countries and indigenous communities who are the guardians of so much of the world’s forests.”

“The Glasgow Breakthroughs will help move us towards a global tipping point, where the clean, green technologies we need to reach net zero and keep 1.5C alive are more affordable, accessible and attractive for all than the polluting practices we are leaving behind.”