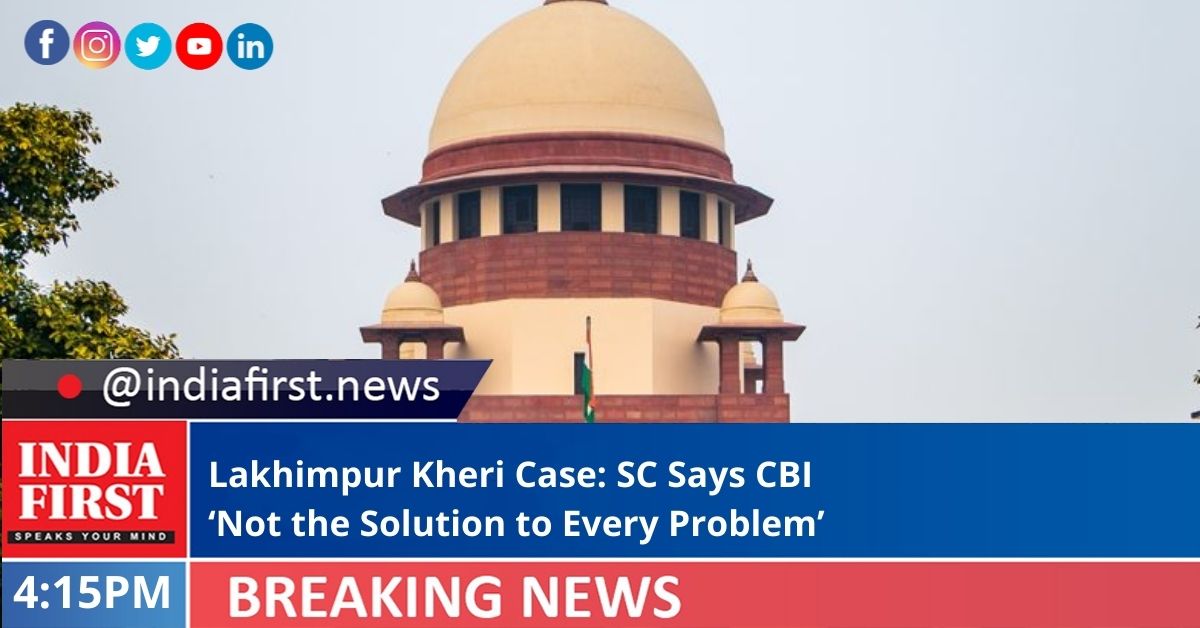 The Supreme Court today declined to entertain submissions from a counsel of a deceased accused, who was allegedly lynched in the Lakhimpur Kheri violence incident, seeking CBI probe in the matter.

A bench headed by Chief Justice N.V. Ramana and comprising Justices Surya Kant and Hima Kohli told the senior advocate Arun Bharadwaj, representing Ruby Devi, widow of deceased accused Shyam Sundar, that it is trying to introduce impartiality and fairness in the investigation in the FIRs in the incident by recommending a retired high court judge to monitor the investigation till the charge sheet is filed.

The Chief Justice, criticising the Uttar Pradesh government over the poor progress in the investigation, told Salve that the court does not want to add to political overtones in the matter, as it emphasized on a retired high court judge to monitor the case.

The bench replied: “CBI is not the solution to every problem…”

The top court emphasised that it is inclined to appoint a retired high court judge, outside of the state of Uttar Pradesh, to monitor the day-to-day investigation till the filling of separate charge sheets in two FIRs — one where a car mowed down protesting farmers and the other where accused were beaten to death.

“We want to protect the evidence collected,” said the bench.

Senior advocate Harish Salve, appearing for the Uttar Pradesh government, clarified that the journalist killed in the violence was actually crushed by the car and he was outside. The bench said the impression was given that the journalist was beaten to death. “Some independent judge should monitor the proceedings. You find out with your government….”, the Chief Justice told Salve.

Bhardwaj showed the photograph of Sundar before he was killed and accompanied by police personnel who were wearing bullet proof jackets and also had AK 47 rifles. The bench asked him not to continuously flash the photograph on screen and added, “That is why we are proposing monitoring by an independent judge…”

It further added that if the state government agrees to monitoring by an independent judge, then he can submit the material before him.

Bhardwaj added that he had sent the photograph to Uttar Pradesh Additional Advocate General 15 days ago, but nothing has been done so far. Salve pointed out if CBI is brought in at this stage, then there will be a reverse problem.

The top court, in the order, said it has made certain suggestions to the Uttar Pradesh government — referring to a high court judge outside the state — as to how investigation is to be conducted, and asked Salve to seek instructions from the government on its suggestion. The top court posted the matter for further hearing on Friday.