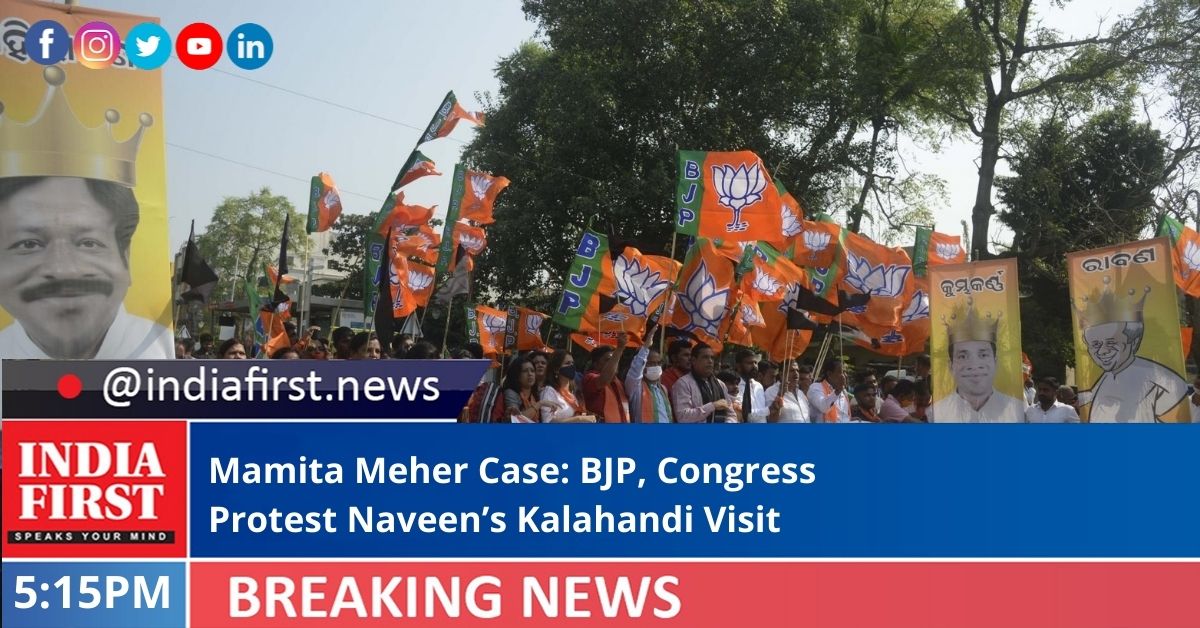 The opposition BJP and Congress yesterday staged protests against Odisha Chief Minister Naveen Patnaik’s visit to Kalahandi district, where a female teacher named Mamita Meher was murdered a month ago.

The Opposition parties held demonstrations from Bhubaneswar to Kalahandi demanding the removal of Minister of State (MoS) for Home, Dibya Shankar Mishra, over the sensational murder case.

Yesterday morning, BJP workers carried out a big rally in Bhubaneswar. However, the police prevented the protesters from moving towards Naveen Niwas, the residence of the Chief Minister from where he travelled to the airport and then to Kalahandi. The BJP activists also scuffled with the police at the Sishu Bhawan square in Bhubaneswar.

Later, the BJP activists sat on dharna and raised slogans against Patnaik and burnt the effigies of the Chief Minister, Mishra and another minister named Pratap Jena.

The police and BJP workers led by MLA Jay Narayan Mishra clashed outside the DIG office in Sambalpur during a demonstration. As the situation went out of control, the police used water cannons on the BJP workers. Many BJP leaders and workers were detained by the police.

Stating that ‘Police Raj’ is prevailing in the state, Jay Narayan Mishra said, “Instead of arresting the persons involved in the Mamita Meher murder case, the police is taking action against us.”

Former Union minister and senior Congress leader Bhakta Das had called for an hour long ‘janata curfew’ in Bhawanipatna from 11 am to 12 noon on Monday to protest against the Chief Minister’s visit.

Similarly, several ministers of the Naveen Patnaik-led government have faced the ire of opposition parties in Kalahandi district while distributing the smart health cards to the people.

BJP and Congress protesters also held demonstrations at the Karlamunda block office and locked it with Skill Development and Technical Education Minister Premanand Nayak still inside distributing the cards.

The BJP activists reportedly hurled eggs at the vehicle of Woman and Child Development Minister Tukuni Sahu and Tourism Minister Jyoti Prakash Panigrahi during their visit to the district.

Under tight police security, the Chief Minister landed at Bhawanipatna and distributed health cards to the beneficiaries. He also digitally inaugurated and laid foundation stones for several developmental projects valued at Rs 860 crore.

For the first time after Meher’s murder, MoS Mishra shared the dais with the Chief Minister. However, neither Patnaik nor the minister spoke a single word about the incident in the event.

BJP MP Basant Panda and Leader of Opposition (BJP) Pradipta Naik boycotted the CM’s event expressing their disapproval over the presence of Mishra.

State Congress leader Debasish Patnaik said, “Today is a black day for democracy. By sharing the stage with Dibya Shankar Mishra, Patnaik has sent an inappropriate message to the public.”