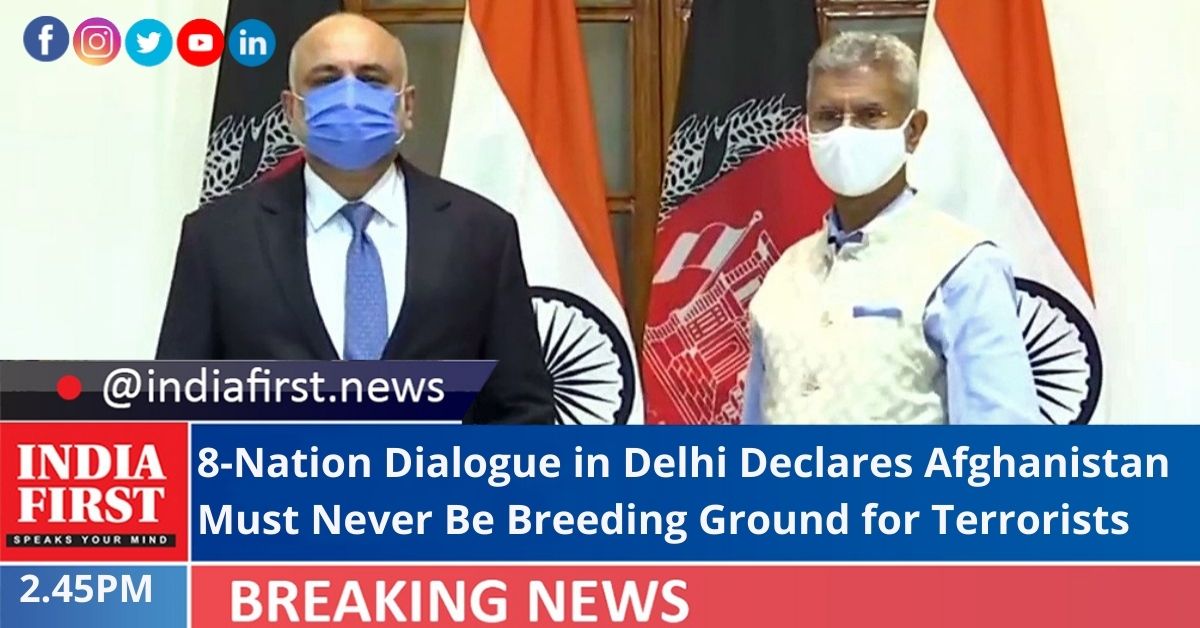 Afghan territory must not be used for terror activities, the eight nations participating in the third Regional Security Dialogue on Afghanistan in New Delhi asserted in a joint declaration adopted yesterday.

“Afghanistan’s territory should not be used for sheltering, training, planning or financing any terrorist acts,” the joint declaration stated after the crucial meeting.

The five Central Asian countries – Tajikistan, Turkmenistan, Kazakhstan, Kyrgyzstan, and Uzbekistan – along with Russia, Iran and India participated in the meeting, while China and Pakistan did not join the dialogue.

At the meeting chaired by India’s National Security Advisor Ajit Doval, all the participants discussed the evolving situation in Afghanistan, especially the security situation and its regional and global ramifications. They also paid special attention to the current political situation in Afghanistan and the threats arising from terrorism, radicalisation and drug trafficking as well as the need for humanitarian assistance.

Without naming Pakistan, all the participating nations reiterated strong support for a peaceful, secure and stable Afghanistan while emphasising on respect for sovereignty, unity and territorial integrity and non-interference in its internal affairs.

Expressing deep concern over the sufferings of people in Afghanistan arising out of the security situation in the war-torn country, the member countries condemned in the strongest possible terms all the terrorist activities and reaffirmed their firm commitment to combat terrorism in all its forms and manifestations, including its financing, the dismantling of terrorist infrastructure and countering radicalisation, to ensure that Afghanistan would never become a safe haven for global terrorism.

The joint declaration also called for collective cooperation against the menace of radicalisation, extremism, separatism and drug trafficking in the region. Underscoring the need to form an open and truly inclusive government that represents the will of all the people of Afghanistan, which has representation from all sections of society in the administrative and political structure, the Delhi summit advocated for the successful national reconciliation process in the country.

Emphasising the importance of ensuring the fundamental rights of women, children and minority communities, it further said that the deteriorating socio-economic and humanitarian situation in Afghanistan is a matter of concern and also underlined the need to provide urgent humanitarian assistance to the people of Afghanistan directly, which must be distributed within the country in a non-discriminatory manner across all sections of the Afghan society.

The declaration further reiterated the importance of the dialogue and agreed to remain engaged with each other in the future, besides deciding to hold the next round in 2022.

Soon after the meeting ended, the seven foreign nations’ security representatives met Prime Minister Narendra Modi and appreciated India’s initiative in organising the dialogue and conveyed the perspectives of their respective nations on the Afghanistan situation.