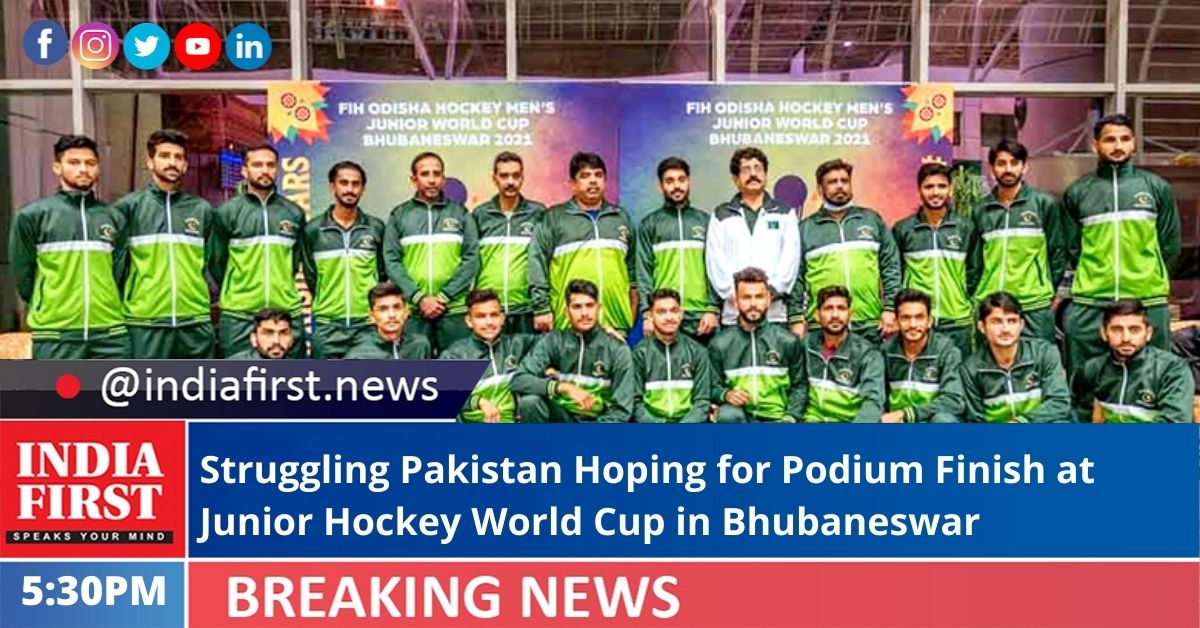 When India and Pakistan met on the opening day of the 2010 Senior Men’s Hockey World Cup in New Delhi, Pakistan was seventh in the FIH Rankings while India was ranked 12th.

When the Pakistan team visited India for the 2018 World Cup at Bhubaneswar, the tables had turned and India was ranked fifth and Pakistan 13th.

Now as the Pakistan junior team reached the Odisha capital to participate in the FIH Odisha Hockey Men’s Junior World Cup, India is ranked third in the world and Pakistan 18th.

So, when coach Mohammad Danish Kaleem’s team led by skipper Abdul Rana takes the turf for its first match against six-time champions Germany on the opening day of the championship on November 24, they will be carrying a huge burden on their shoulders — they have to prove that Pakistan hockey may be in the doldrums in the last decade or so, it still has potential to rise from the ashes if they get the support they deserve.

Danish Kaleem said that there are many reasons for the decline of Pakistan hockey but things are looking up. For a few years, the departmental teams (which had played a big role in the development of their hockey) had stopped recruitment and that was one of the reasons for the decline. “Now with the encouragement of the Pakistan government, the departmental teams have started recruiting players again and if the players get chances to play in top events, the Pakistan hockey will surely recover,” said Danish Kaleem, who represented his country in the 1996 Olympics in Atlanta in which the team finished sixth.

Pakistan are in Pool D with Argentina, Germany, and Egypt as the other teams in their Pool at the 2021 Junior World Cup. With both Argentina and Germany ranked higher than them, making it to the knockout stage will be an uphill task for the neighbours.

Danish said the team has come to India with high expectations and is confident of the players putting up a good performance. He said the players are fit and have played some good preparatory matches against the Pakistan senior team and some top departmental sides in domestic hockey.

“Since the last one year after the Covid-19 break, we have had some tournaments and all those boys that performed well were called for the camp. We had many short camps of 3 or 4-week duration interspersed by short breaks. I feel the boys have come up well and I am confident that they have it in them to finish on the podium,” Danish said during a virtual press conference organised by Hockey India yesterday.

He said the weather will not be a problem for his boys as they had attended camps in Karachi, where the weather is similar to Bhubaneswar. Danish was with the Pakistan senior team when it played in the 2018 World Cup in Bhubaneswar and said he has told the players what to expect in this event.

Pakistan team’s captain Abdul Rana said the long camps have helped his players come close like a family and believes that they have the talent and ability to perform well at this level.

“The Covid-19 pandemic has disrupted our preparations just like it did for teams around the world. But I am confident my boys have prepared well and will come up with good performance in the junior world cup,” he added.

Winner of the inaugural Junior Men’s Hockey World Cup in 1979, Pakistan was a force to reckon with in the event till 1993 when they won a silver medal behind Germany. They have failed to reach the semi-finals since 1993.