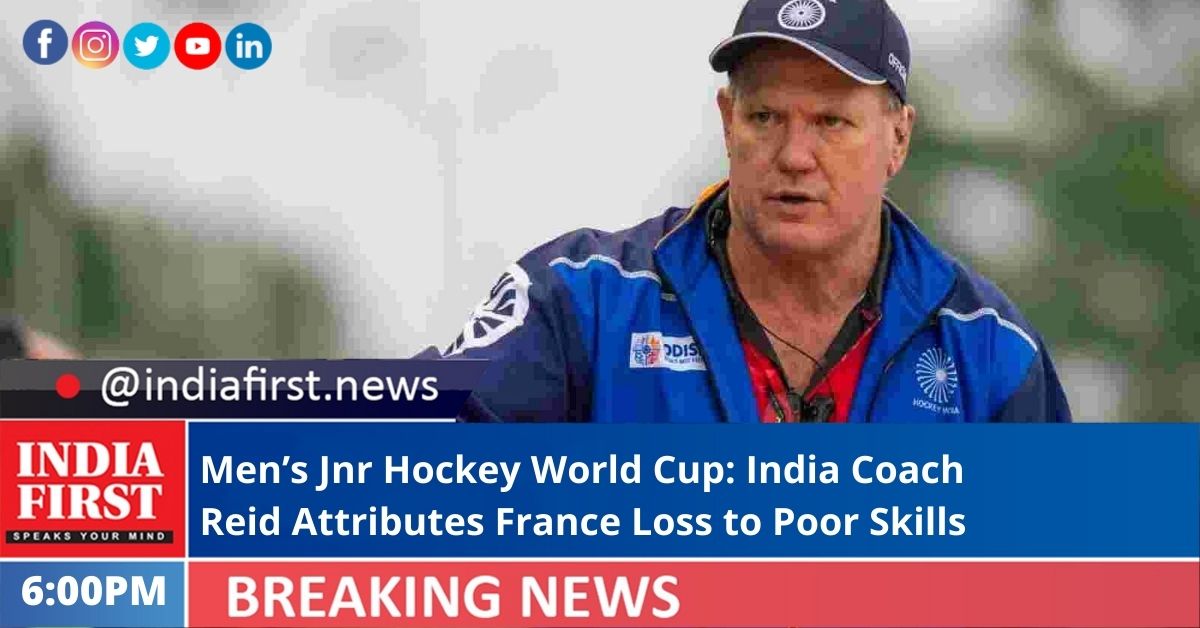 The chief coach of the Indian men’s hockey team, Graham Reid, blamed the poor basic skills of his players and missed opportunities for the team’s shocking 4-5 defeat to France in their first match of the FIH Odisha Hockey Men’s Junior World Cup at the Kalinga Stadium in Bhubaneswar yesterday.

Reid, who is managing the junior team in the capacity of high-performance director, said his team created sufficient opportunities but could not capitalise on them. He said India paid the price of allowing France to lose balls deep in their half, which the French players put in the goal.

“Very hard to give a team five goals and expect to win. I thought we created enough opportunities. We made very basic errors, trapping, we missed some overheads, we hit the post 2-3 times, one shot went across the goal,” Reid said after the match.

“We need to create more pressure on the ball, we did not do that. Having said that, congratulations to France, they played sharp and wanted to win today. Our guys were also keen and did what we could do. But unfortunately, things did not go right for us tonight,” he added.

About the lack of coordination among his players in their opening match, Reid said it was difficult to have coordination when the players were making errors in basics.

“It is hard to get coordination if the basics are not right. At the back, we gave them too many easy balls deep in our territory. We gave a couple of such chances today and the French put everything in the goal. I am not sure how many shots they had but almost all of them were on the goal,” said Reid.

Reid said his team’s preparations suffered due to the COVID-19 pandemic but that was also the case for other teams and no competitions were held in the last one year for this age-group players.

“All teams suffered from that gap in 2020 when we did not get enough competition with this group when we did not have international competitions due to the COVID pandemic. Probably, Europe was more open but we can’t use that as an excuse,” he said.

The Australian coach of the Indian team dismissed the notion that his players could not play their usual game because they were simulating other teams in matches against the senior team during its preparations for the Tokyo Olympics. The players managed to play their usual game and could have won the match if they had not made errors in basics and not missed 2-3 chances.

About the upcoming matches, Reid said they will have to create more pressure on the ball and not allow the opponents so many easy chances.