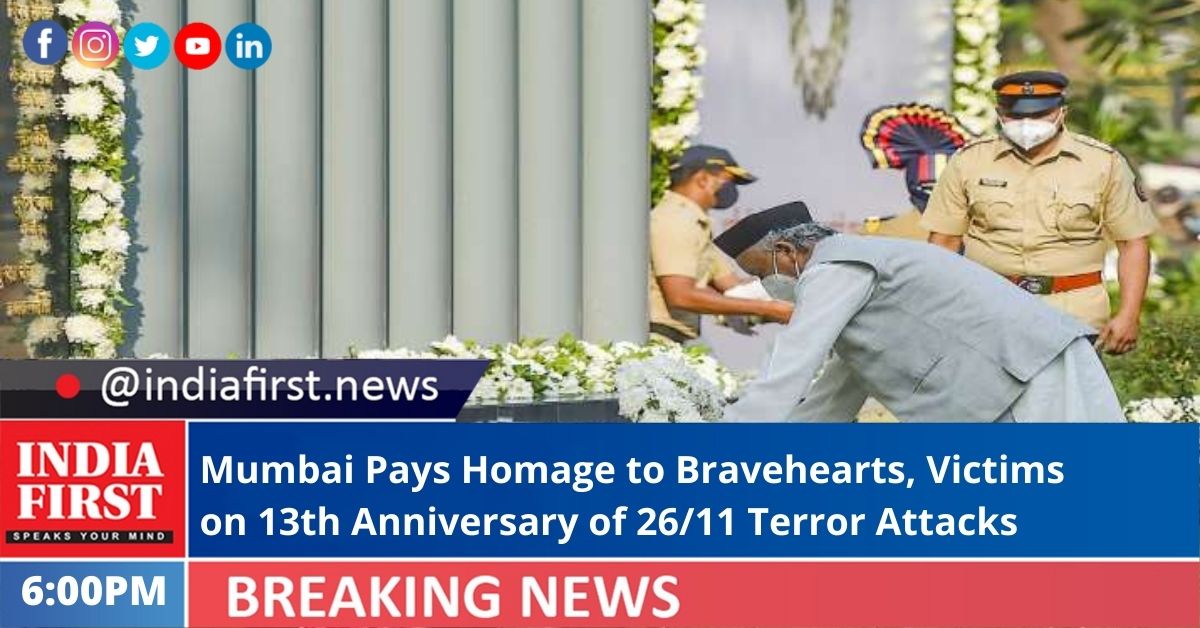 Mumbai today remembered the bravehearts and victims felled by bullets and others who saved lives on the 13th anniversary of the dastardly terrror strikes by 10 Pakistani terrorists who paralysed the city on November 26-29 2008.

Chief Minister Uddhav Thackeray, currently convalescing, saluted those who lost their lives during the terror strikes and expressed his gratitude to those who fought the terrorists, terming the attack “a cowardly act”.

He recalled the services of the police and security forces and the people of Mumbai for warding off the assault on the country’s commercial capital and recovering from its effects.

A large number of police personnel turned up to pay homage to their colleagues who lost their lives while fighting the terrorists who struck at key locations in south Mumbai, with special memories for Tukaram G. Omble who sacrificed his life while pinning down Ajmal Amir Kasab, the sole terrorist nabbed alive in the early hours of November 27, 2008.

The still-grieving family members, relatives of the martyrs and several bravehearts, as also ordinary people paid homage to the departed souls with folded hands, bowed heads, lighting candles, offering flowers or wreaths, at the Martyrs’ Memorial and other locations in the city.

They included the widows, mothers, sons, daughters, brothers or sisters, who stepped upto the memorial and offered their own personal tributes with flowers or tears for their departed near and beloved ones.

Similar in memoriams were held at some of the worst-hit targets like the Chhatrapati Shivaji Maharaj Terminus, Hotel Taj Mahal Palace, Hotel Oberoi, the Chabad House, the Cama Hospital, and the Leopold Cafe, which bore the brunt of attackers leaving around 175 dead and over 300 injured.

The traditional and social media featured several remembrance ads, glowing and touching tributes and messages of the 60-hours that shook the world before the security forces won over the terrorists – eliminating 9 and taking one (Kasab) alive – to face the Indian law in an unprecedented ‘open trial’.