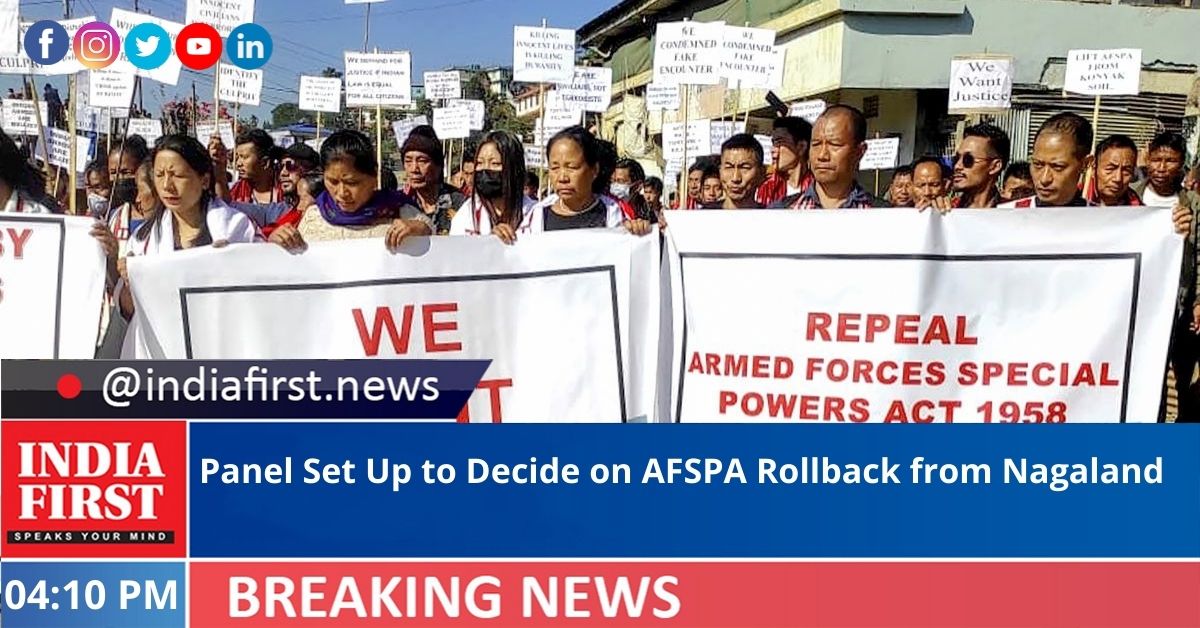 A committee has been formed to look into the demand of withdrawal of the Armed Forces (Special Powers) Act, 1958 (AFSPA) from Nagaland and the panel would submit its report to the government within 45 days, Chief Minister Neiphiu Rio said in Kohima yesterday.

The committee was formed after Union Home Minister Amit Shah on December 23 in New Delhi chaired a meeting which was attended by Nagaland Chief Minister, Assam Chief Minister Himanta Biswa Sarma, Nagaland Deputy Chief Minister Y. Patton and Naga People’s Front (NPF) legislature Party leader T.R. Zeliang. The meeting also discussed the present scenario in Nagaland and the decision about formation of the committee was taken in that meeting.

The committee was formed following the vociferous demand to repeal the AFSPA from the entire northeastern region after the killing of 14 civilians by armed forces personnel due to “mistaken identity” at Oting in Mon district of Nagaland on December 4 and 5.

According to the Nagaland Chief Minister, a Court of Enquiry would initiate disciplinary proceedings against the army unit and army personnel, who are directly involved in the Oting incident and action would be taken immediately on the basis of fair enquiry.

The identified persons who would face the enquiry will be placed under suspension with immediate effect. The December 23 meeting also decided that the state government would provide government jobs to the next of kin of the slain people.

“To initiate this process, the Deputy Commissioner and the Superintendent of Police of Mon district, would carry out necessary procedures in consultation with the concerned village councils and government jobs would be given on compassionate grounds on the basis of eligibility. A Nagaland delegation led by the Chief Minister impressed upon the Union Home Minister to replace the Assam Rifles unit in Mon district with immediate effect,” an official statement said.

It said that the state government appeals to all sections to remain calm and to continue to maintain peace. The democratic and peaceful nature of the civil society groups, ‘tribal hohos’ and mass based organisations in our collective quest for justice and truth has been well received and has created a positive image of the Naga people to the rest of the global community, the statement added.

Nagaland Chief Minister thanking the Union Home Minister yesterday tweeted: “Grateful to Amit Shah ji for taking up the matter with utmost seriousness. The state govt appeals to all sections to continue to maintain a peaceful atmosphere.”

The Nagaland Assembly, in its special session on December 20 unanimously passed a resolution demanding the Centre to repeal the AFSPA from the entire northeast region, and specifically from Nagaland, so as to strengthen the ongoing efforts to find a peaceful political settlement to the Naga political issue.

The AFSPA, which allows the Army and other central paramilitary forces to conduct raids, operations, arrest anyone anywhere without prior notice or arrest warrant, is in force in Nagaland, Assam, Manipur barring the Imphal municipal council area and certain districts of Arunachal Pradesh.