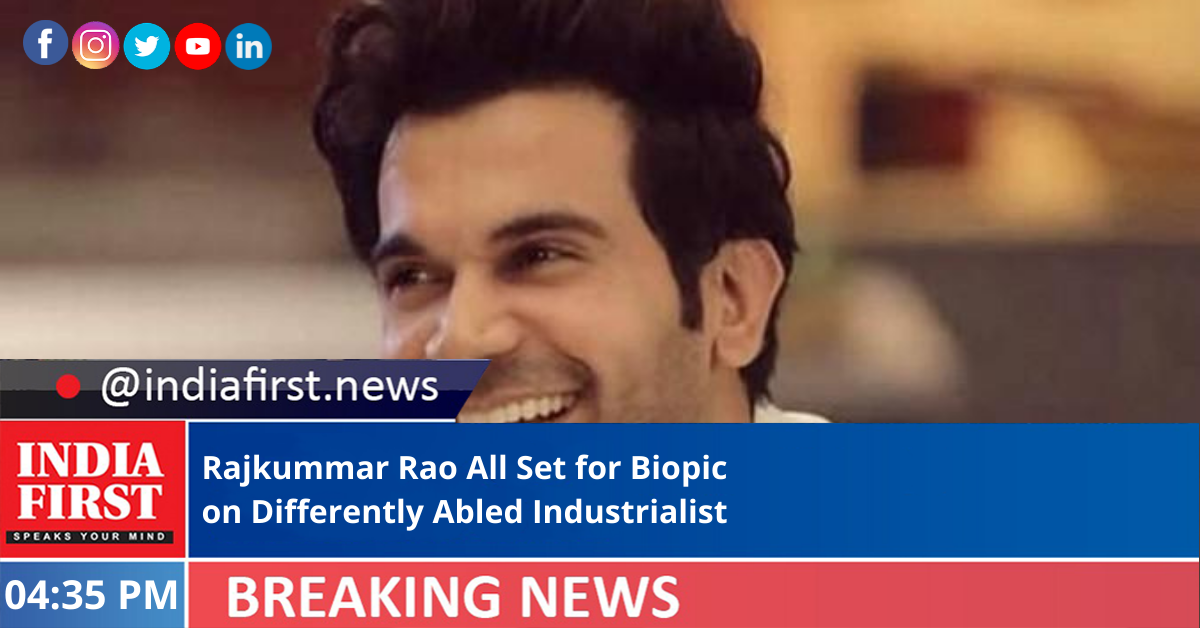 Acclaimed actor Rajkummar Rao is all set to star in a biopic on Srikanth Bolla, the 29-year-old visually impaired industrialist who did not let his adversity come in the way of making it to the Massachusetts Institute of Technology (MIT) and then starting Bollant Industries with funding from Ratan Tata.

Born into a family of farmers in Machilipatnam, Andhra Pradesh, Bolla took the state government to court when, citing his disability, he was not allowed to pursue the Science stream after he cleared his Class X exams.

He not only won the case, but also topped his school in Class XII. And though he was not admitted into IIT coaching classes, he got into MIT, becoming the first international visually impaired student to be able to do so.

On his return from MIT, Bolla got involved with the Lead India 2020 campaign launched by the late President A.P.J. Abdul Kalam, set up organisations for the rehabilitation of disabled people and to pursue Sustainable Development Goals, and established Bollant Industries, which makes reusable products from waste material.

The film, tentatively titled ‘Srikanth Bolla’, has been written by Sumit Purohit and Jagdeep Sidhu, and will be helmed by Tushar Hiranandani, who earlier directed ‘Saand Ki Aankh’.

Talking about his character, Rajkummar Rao said, “Srikanth Bolla is an inspiration! It’s indeed a privilege to play such an inspiring persona who has been through a lot of hardships and despite that has risen like a phoenix! I am really looking forward to playing Srikant. I’m happy to collaborate with Bhushan sir yet again on this compelling project.”

Commenting on the inspiring story, Bhushan Kumar, Managing Director and Chairman of T-Series said, “Srikanth Bolla’s story testifies the very proverb of acing against the odds. Having faced so many challenges since birth, yet not letting anything hamper his dreams – his journey is truly inspirational. And it’s indeed a privilege to be associated with a person like him.”

He adds, “The personality of this character is such that only an actor of a calibre like Rajkummar Rao can justify it and we are happy to have such a fine actor on board. Tushar Hiranandani’s vision to showcase this captivating story is very peculiar. As we are thrilled to make this film, we are equally excited for the audiences to witness this compelling story of Srikanth.”

The film, presented by Gulshan Kumar and T-Series and produced by T-Series Films & Chalk N Cheese Films Production LLP, will go on floors in July 2022.