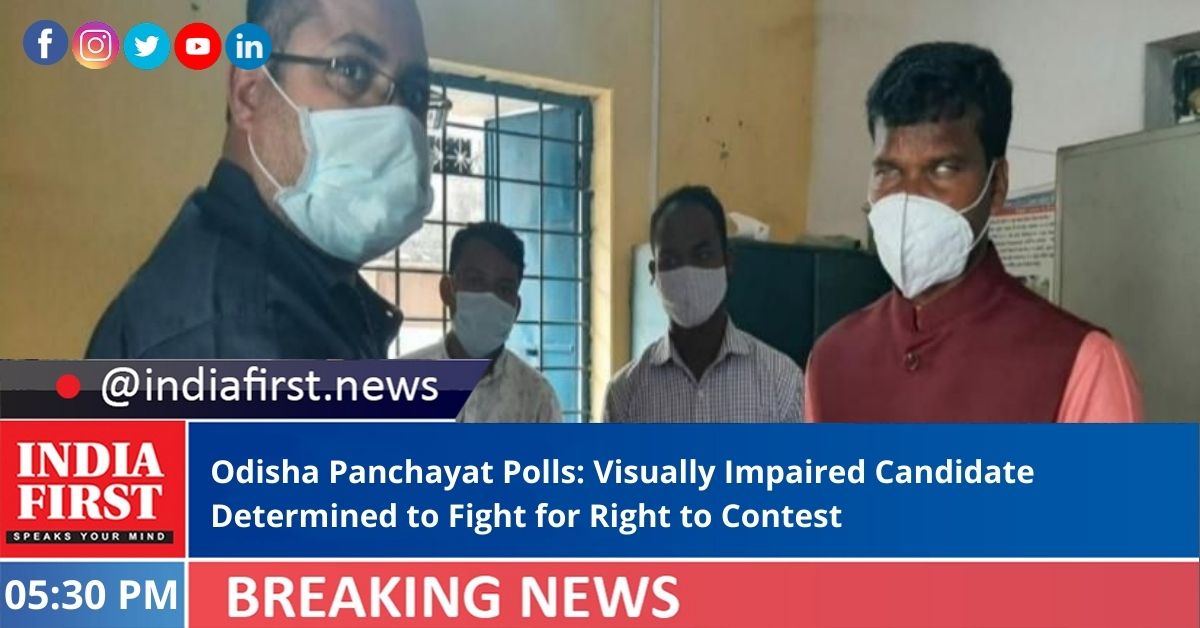 The nomination of 40-year-old visually impaired Shantilal Sabar, a candidate for the Sarpanch of Gandamer Gram Panchayat, Nuapada district, was rejected because he signed the nomination papers in Braille. This has triggered a demand for amendment in the Odisha Gram Panchayat Act and reservations for the differently-abled and highlighted the discrimination and insurmountable challenges faced by the community.

His case has also attracted the attention of the Odisha film industry (Ollywood), he said, and a few people have expressed interest in making a film based on his life. “They said they will visit me in my village soon,” said Sabar.

In 2012, the nomination of another visually impaired candidate, Golak Gauda from the Sanakhemundi block of Ganjam district, was rejected because he had placed a thumb impression instead of his signature. Sabar said that there was a call to amend the Act at that time; however, even after ten years, nothing has changed. The uproar only lasts during elections and fizzles out once the polls have concluded. Nevertheless, Sabar is determined to pursue his case and fight for reinstating his nomination.

Many visually impaired officers are employed across the nation despite their disability, including the IAS and IFS. Their contributions to the country, notwithstanding, Nuapada Sub Collector Taranisen Naik told The Hindu, “Shantilal’s nomination had been cancelled as he could not read and write Odia. A visually impaired candidate cannot hold a highly demanding post like a Sarpanch who has to handle a fund of almost Rs 1 crore. The work of Sarpanch requires multi-tasking. Under various government schemes, they have to go through hundreds of applications seeking houses, pensions, etc. Blind candidates may face problems in grievance redressal.”

The sub-collector’s statement disappointed Sabar. He told 101Reporters, “When an officer has this perception of visually impaired people, how could the general public trust him? The treasury officer of the district is also visually impaired. He is doing his job well. If I become the Sarpanch, I will discharge my duties responsibly. I can do my job well with the advancement in technology with the help of screen reading software, scanners, etc. Also, it is in the guidelines that I can have a helper to assist me.”

Sabar wants to develop his village, Dabripada. He said, “The government has provided so many schemes that everyone can live comfortably. However, their benefits are not reaching the villages. If I become the Sarpanch, I will provide all the facilities available in towns in my Panchayat. My priorities are building proper roads, providing clean drinking water, a good mobile network and a public library. I will install a big screen in the village centre so that the villagers can be up-to-date with news and information.” He said that if elected Sarpanch, he would develop a model Panchayat in two years and set up a fund of one crore rupees towards the development of the village. Based on the success of his endeavour, he would then contest elections for the post of MP or MLA in 2024.

Sabar has been blind since birth and has studied at a school for the visually impaired in Kalahandi district. He completed his tenth board examination in 2003 through correspondence conducted by the Board of Secondary Education, Odisha. He had scored 50 marks out of 100 in the Odia language in this exam. Due to personal reasons, he then had to discontinue his studies. However, he is currently pursuing his final year BA from IGNOU. In 2012, he started Samarth, an organisation in Gotia village, Kalahandi, which works for the upliftment of the visually impaired. They are currently working with about forty persons who are blind, helping them with skill development, technology access and training in music and handicrafts. They are also assisted in their chosen subject of studies. The organisation also has a manufacturing unit of phenyl, dish wash liquid, sanitiser and candles.

Sabar has demanded that the Gandamer Panchayat elections be postponed and that he be given the opportunity to contest the elections this time. He said that differently-abled people were deprived of their rights by cancelling their nominations despite having necessary educational qualifications. He plans to approach the Odisha High Court with support from Odisha Blind Association and Odisha Viklang Manch, and initiate a district-wise protest.

In Sabar’s case, senior advocate and social activist Murlidhar Panda said, “The Gram Panchayat Act does not say that the candidate should only read and write the Odia alphabet. The defendant can read and write Odia in Braille. In Section 25 of the Act, it is not specified that a blind person can be disqualified for the post of Sarpanch. Under the Rights of Persons with Disabilities Act 2016, no person can be classified based on disability. The cancellation of his nomination is unconstitutional.”

The Odisha Viklang Manch has written a letter to the State Election Commission, Odisha Human Rights Commission and State Commissioner for Persons with Disabilities, demanding amendment in the disputed Act and immediate validation of Sabar’s nomination.

Sabar is hoping to set a precedent for all differently-abled candidates. He said, “I do not have any specific knowledge of the law, and due to my financial condition, there may be some problems in fighting the legal battle. However, if the verdict is in my favour, other people like me will also stand a chance in future.”