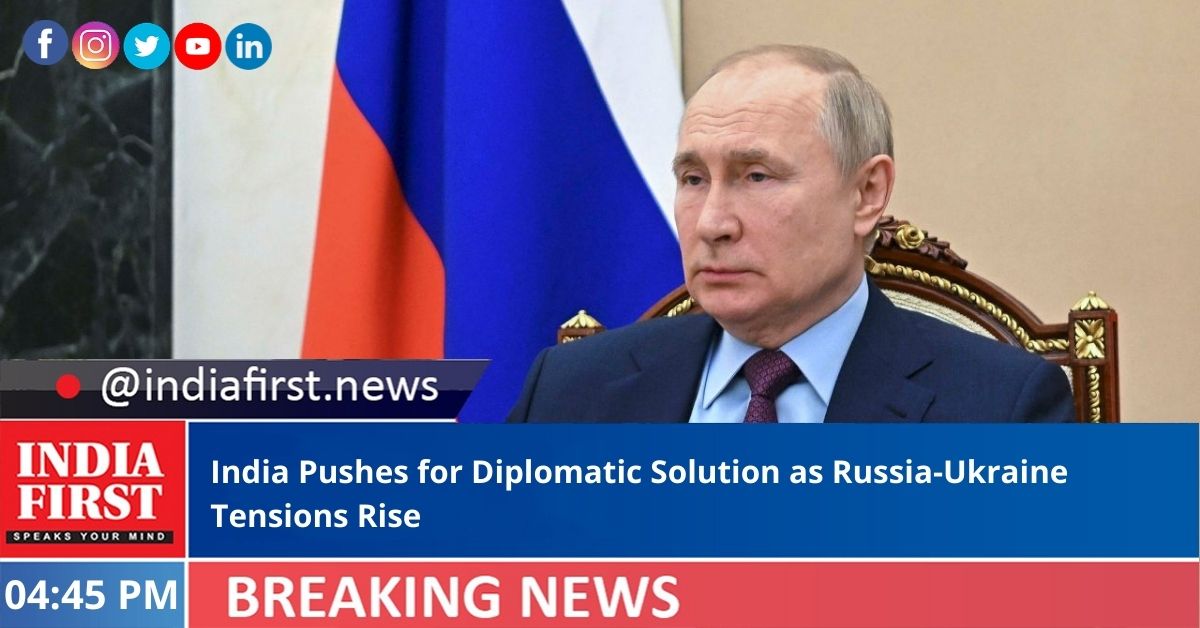 As tensions rose feverishly around Ukraine, while the US and Russia clashed at the UN Security Council, India has said that that is in contact with the parties in the Kiev crisis and reiterated its call for a diplomatic dialogue to de-escalate the situation.

“India’s interest is in finding a solution that can provide for immediate de-escalation of tensions taking into account the legitimate security interests of all countries and aimed towards securing long-term peace and stability in the region and beyond,” India’s Permanent Representative T.S. Tirumurti told the Council yesterday.

“India has been in touch with all concerned parties. It is our considered view that the issue can only be resolved through diplomatic dialogue.”

Blinken asserted that Russia was preparing to launch an attack in the coming days and even sketched out in detail what he claimed was Moscow’s battle plan starting with false flag events that will be used to carry out missile attacks and bombings across Ukraine with communications jammed and cyberattacks shutting down institutions to be followed by a march on the capital Kiev.

Vershinin, who also presided over the Council as session Russia heads the Council this month, called Blinken’s scenario “baseless insinuations” that “are dangerous because they add tension to the already tense atmosphere”.

He added that some after military exercises Russian units have started to move back to their permanent bases.

Secretary-General Antonio Guterres, who was away in Germany for the Munich Security Conference, has discounted the threat of an imminent war.

He “continues to think that this conflict will not happen”, his spokesperson Stephane Dujarric reiterated at his daily briefing.

“His message is one of increased diplomacy, of lowering tensions, of de-escalation, and that’s the message he will continue to deliver.”

At the Council, underlining India’s interest in a peaceful solution amid heated rhetoric, Tirumurti noted that there were more than 20,000 Indians living and studying in various parts of Ukraine.

“Any steps that increase tension may best be avoided by all sides in the larger interest of securing international peace and security. Quiet and constructive diplomacy is the need of the hour.”

Earlier this week, India asked its citizens to leave Ukraine.

Unlike at the last meeting of the Council on Ukraine, there was no procedural vote that would have required India to take a stand.

India abstained from voting on the US-backed proposal to discuss Ukraine at the January meeting.

But India kept its neutral stance by not criticising the Russian troop build-up and with the clause that de-escalation takes “into account the legitimate security interests of all countries and aimed towards securing long-term peace”.

Russia has asserted that Ukraine not joining NATO was in its security interests, a factor underlying the tensions, and maintained the centrality of the Minsk accords in de-escalating the situation, which Moscow said had not been adhered to.

Ukraine and the US, as well as other Western countries, find that the Russian troop build-up near the Ukraine border, the takeover of Crimea and the resolution by the Duma, the top Russian legislative body, to recognise two breakaway regions, Donetsk and Luhansk, as independent nations are threats to Ukraine.

Tirumurti expressed India’s support for the Minsk Agreements and the Normandy format of diplomacy for finding a solution to the Ukraine situation.

“We believe that the Minsk Agreements provide a basis for a negotiated and peaceful settlement of the situation in Eastern Ukraine. Accordingly, we urge all parties to continue to engage through all possible diplomatic channels and keep working towards the full implementation of the Minsk Agreements.”

The Minsk Agreements were reached in 2014 ad 2015 among representatives of Russia, Ukraine, Ukrainian separatists, and the multinational Organisation for Security and Cooperation in Europe for de-escalating the situation in Ukraine.

The Normandy Format is a process of diplomacy with the participation of Russia, Ukraine, Germany, and France to deal with the situation.