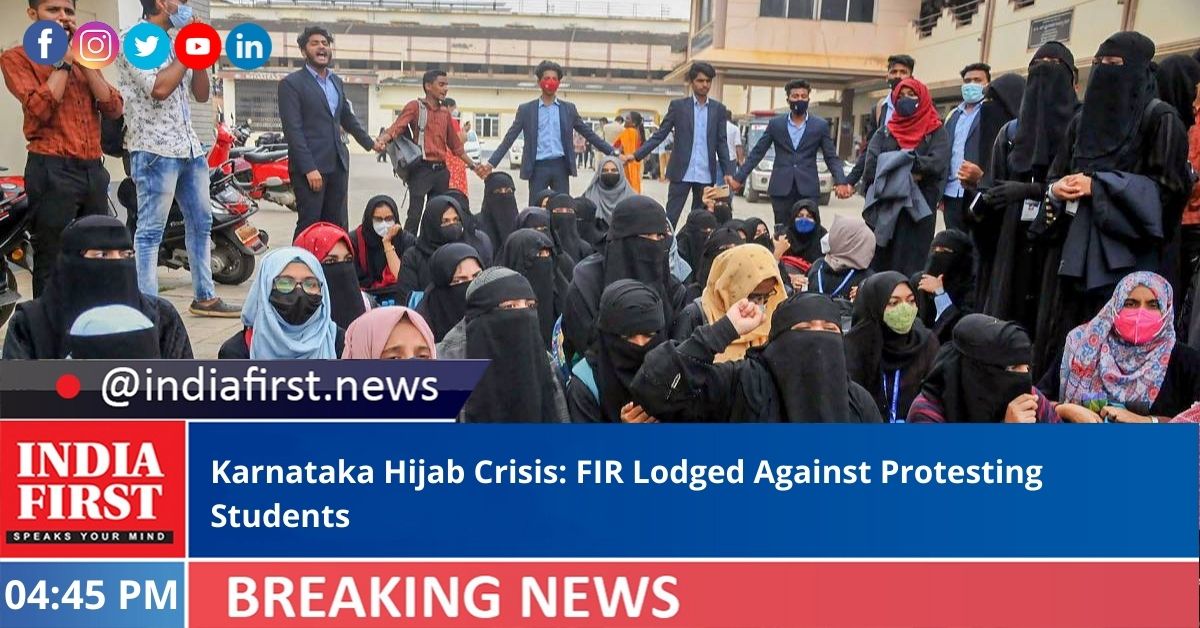 Even as the Karnataka High Court Special Bench is hearing the Hijab case on a daily basis, students continue to come to colleges wearing hijab and getting into arguments with the college authorities. As a first punitive action against these students, an FIR was lodged against them for violating prohibitory orders in Tumakuru district today.

The Principal of Empress College of Tumakuru lodged a complaint with the Tumakuru City Police against 15 to 20 students for violating prohibitory orders in the last two days. The students demanding their right to wear hijab and attend classes, created high drama in the college premises by staging a protest.

However, the Principal has not named any student in the complaint.

This is the first FIR against students for protesting against authorities seeking permission to attend classes wearing hijab. Home Minister Araga Jnanendra has earlier stated that there would be no soft approach towards the students anymore and has directed to initiate action against those who flout the interim orders.

In yet another incident, the Principal of Indi College in Vijayapura district has sent back a Hindu student for wearing ‘sindoor’ (vermillion). She was stopped at the gate and asked to remove the sindoor as no religious symbols are allowed. The relatives came to the school premises and questioned school authorities and told him that the basic tradition could not be questioned. After the intervention of police, the student was let inside the classroom. Sriram Sene Founder Pramod Muthalik has demanded suspension of the Principal and condemned the action.

The students, who came to attend classes with saffron shawls protesting against Muslim students wearing hijab, were denied entry and sent back in Nandhghad College of Khanapura in Belagavi district.

Meanwhile, the video of the Principal of Junior College in Coorg district shouting at hijab-wearing students to leave the college premises went viral on social media.

Karnataka Police have registered an FIR against Congress leader Mukarram Khan in Kalaburagi for his controversial “tukda tukda” comment (cutting into pieces) under IPC Sections 153 (A), 298, 295. On February 8, Khan stated that he would cut into pieces if anyone comes against the matter of hijab. “Hijab is an internal matter. We will not interfere with Hindu traditions, if you come to question our religion, nothing will be spared.” Hindu organisations have strongly protested against the comments and demanded action.