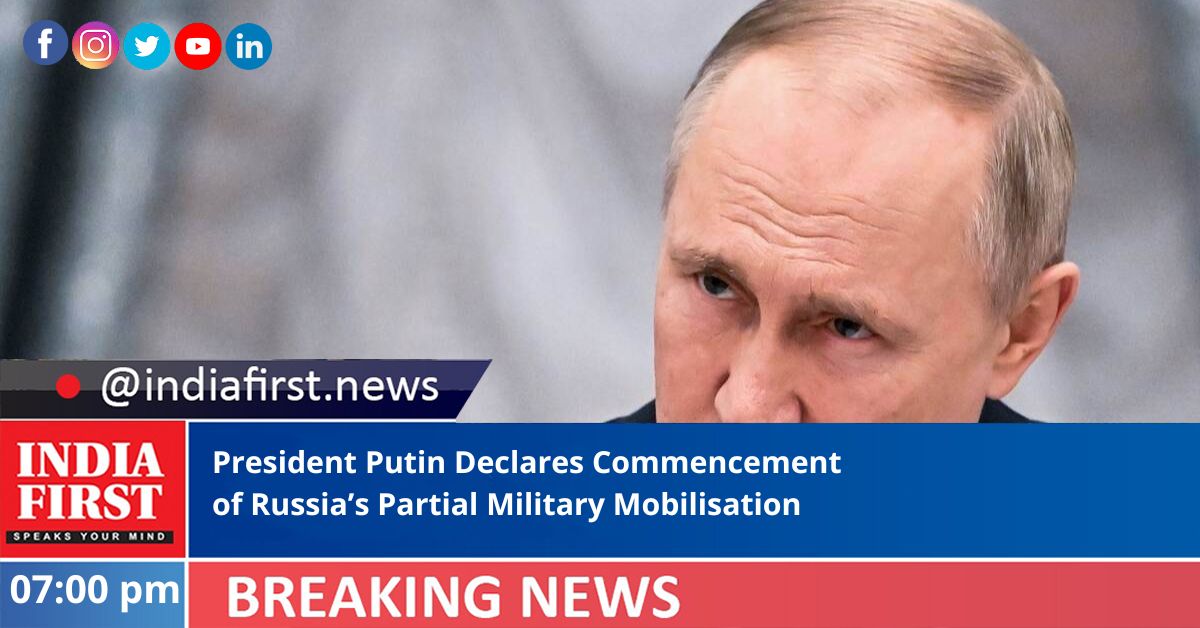 Russian President Vladimir Putin announced a partial military mobilisation during an address to the nation on Wednesday, adding that the Defence Ministry had recommended drawing military reservists into active service as the country faces a protracted conflict in Kiev and the separatist Donbas region in eastern Ukraine.

The measure is sensible and necessary under the circumstances that Russia is fighting “the entire Western military machine” in Ukraine, RT news quoted the President as saying.

He has already signed an order for the call-up to start immediately.

The move will see the armed forces draw on military reservists only, and those who have completed national service, Putin said.

He promised that they would be provided with additional training, along with all the benefits due to people involved in active duty, RT reported.

Some senior officials in NATO states have even suggested that using tactical nuclear weapons against Russian troops would be justified, according to Putin.

The Russian leader stressed that Moscow would not hesitate to retaliate to such an attack with its own nuclear weapons, RT reported.

Defence Minister Sergey Shoigu revealed some details about the mobilization in a separate statement on Wednesday.

He said his Ministry wanted to call to arms some 300,000 reservists, or just over 1 per cent of Russia’s full mobilisation potential.

Putin has accused Kiev of backing away from peace talks with Moscow, which he said it had done on the instructions of its Western allies.

Instead, the Ukrainian government has doubled down on military action, he was quoted as saying

Russian forces sent to Ukraine in February have secured a large portion of territory claimed by the “Donetsk and Luhansk People’s Republics”, as well as parts of Ukraine, he said, adding that the resulting frontline stretches over 1,000 km, RT reported.

He warned the US and its allies against ramping up pressure on Moscow. Western nations are openly pursuing a military defeat of Russia, seeking to push the country into insignificance and to loot its natural wealth, he stated.

“Parts of Western elites use every effort to preserve their dominance. That is why they try to block and suppress any sovereign centres of development, so that they can continue to brutally force their will on other nations and peoples, to impose their pseudo-values,” he explained.

“Their goal is to weaken, disunite and ultimately destroy our nation.”

Putin also commented on the upcoming referenda in the two Donbas republics and two regions of Ukraine currently controlled to a large extent by Russian troops.

The four entities are putting to a general vote a proposal to ask Moscow to accept them as new parts of the Russian Federation, with polling scheduled to start on Friday, RT reported.

The Russian leader pledged to support the plebiscites in terms of security and said his government would respect whatever outcomes they produce.

Russia’s goal is to protect civilians from the Ukrainian government, which had escalated the persecution of its opponents at home and had been using terrorist tactics against people living in Russia-controlled lands, Putin added.