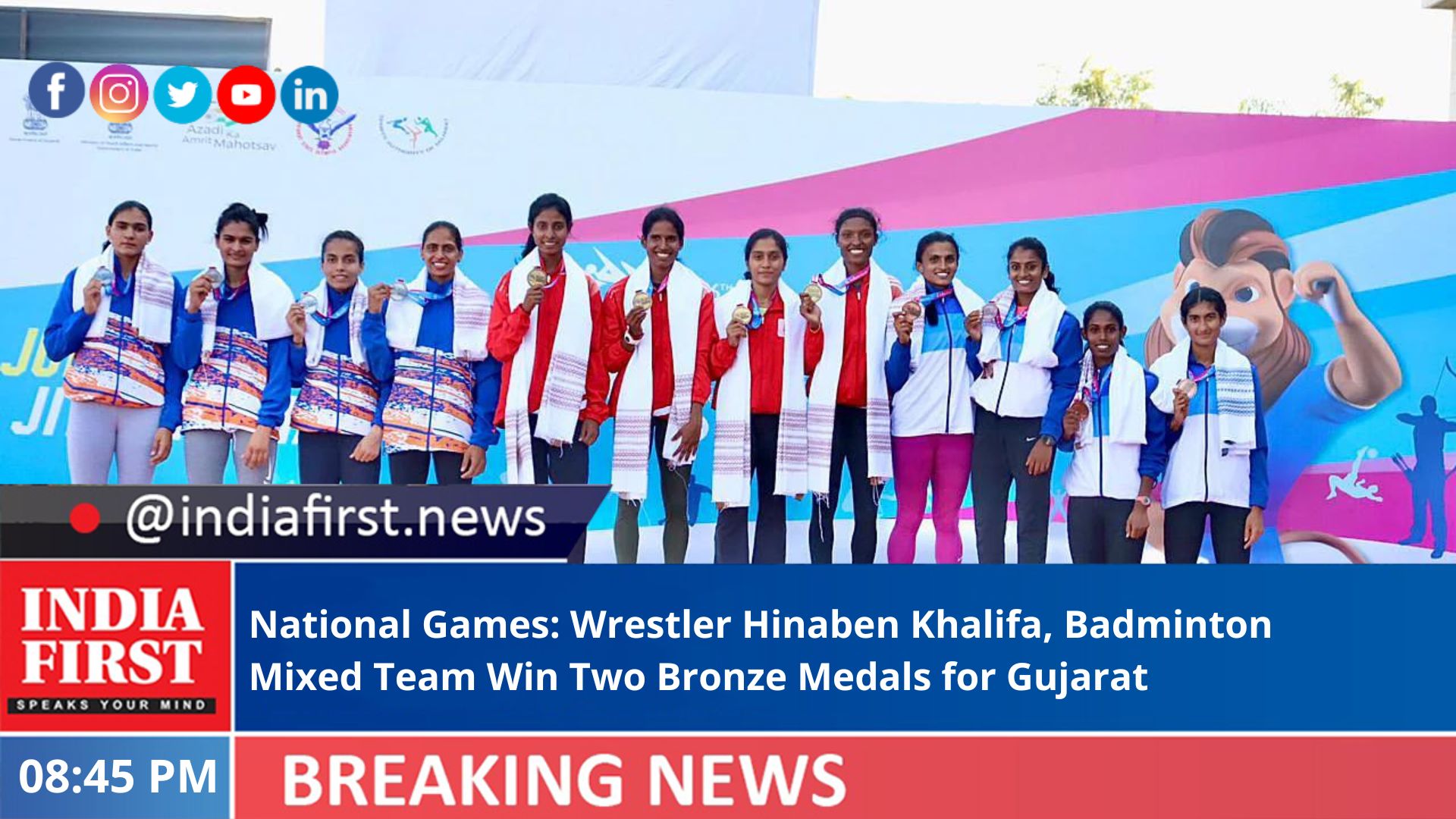 Hinaben Khalifa became only the second woman wrestler from Gujarat to clinch a National Games medal and the hosts also bagged the badminton mixed team bronze on a day when five Games Records were broken in the swimming pool.

Hinaben Khalifa had been training under the radar at the Gujarat government’s Centre of Excellence in Nadiad but rose to the occasion to clinch a bronze medal in the women’s 53 kg weight category.

She began her campaign with an easy win over Himachal Pradesh’s Ritika and then won by technical superiority against Uttarakhand’s Priyanka Sikarwar. She was, however, no match to eventual champion Antim Panghal of Haryana.

But Hinaben Khalifa regrouped herself in time for the bronze medal bout against Shivani. She took a 2-0 lead early into the contest and then bagged three successive points immediately after the breather. With hardly a minute left, Shivani did manage to get a point back but Khalifa stifled any further scoring opportunities to win 7-1.

“It would have been great to win gold in front of the home crowd. But unfortunately, it didn’t turn out as expected. This is a great learning curve for me, and getting a bronze at the National Games will boost my confidence,” said Hinaben Khalifa after the bout.

“The level of competition is really high in my weight category. Antim has been a world beater, Priyanshi is the top seed, it is a healthy competition and every wrestler has to put in a lot of effort to get past the other,” she added.

However, there was heartbreak for Gujarat in the women’s 57kg category as Bhavika Patel went down 4-6 against Sonali Mandlik of Maharashtra in the bronze medal play-off.

In Surat, Gujarat’s badminton mixed team fought hard against second seeds Kerala in the semifinals but went down 1-3. However, the first-ever semifinals appearance assured them of a historic bronze.

Elsewhere, Aneesh S. Gowda announced his arrival as a bright prospect on the senior stage in a telling fashion, scripting a fairy-tale victory over the seasoned Sajan Prakash in the men’s 200m Freestyle final in the National Games Aquatics competition at the Sardar Patel Aquatics Complex in Rajkot.

On a day that saw five National Games Records being rewritten in the pool, Aneesh Gowda’s 1:51.88 was the standout effort. The Karnataka teenager, who won the event at the National Championships last month, showed nerves of steel and immaculate focus when squaring up against the Olympian.

Not to be left behind, track and field competitors also produced four National Games Records in five finals at IIT Gandhinagar on Sunday. Services high jumper Sarvesh Anil Kushare with a clearance of 2.27m and Uttar Pradesh’s Usaid Khan who won the decathlon with 7121 points.

Yamandeep Sharma (Rajasthan) joined Usaid as the first two men to pass 7000 points in the National Games. The Haryana men’s 4x400m relay quartet and the Tamil Nadu 4×400 squad were the others who came up with New National Games Records.

On the opening day of hockey competitions, Sunelit Toppo scored the winner for Odisha in their 3-2 win against Uttar Pradesh in a women’s Group A match at the Major Dhyan Chand Stadium in Rajkot. Favourites Haryana thumped novices Gujarat 30-1 in another match., Navneet Kaur and Neha leading the scoring with five goals each. For the hosts, Muskan Kureshi got a consolation goal in the 37th minute.