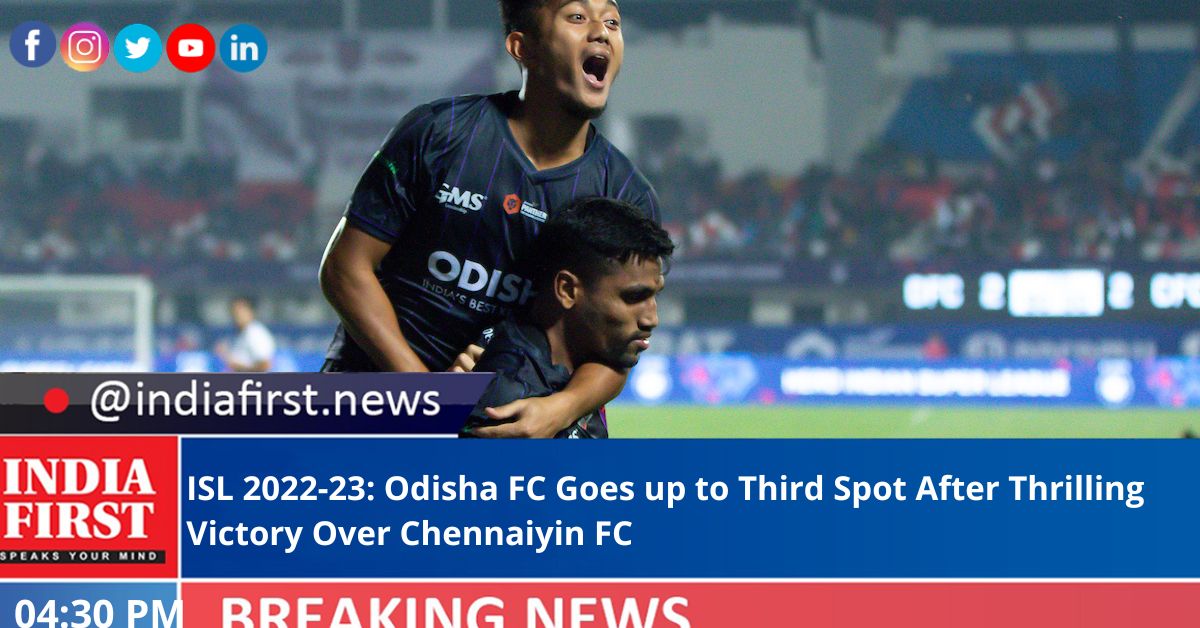 A 96th-minute goal by Nandhakumar Sekar clinched a dramatic 3-2 win for Odisha FC against Chennaiyin FC in the Indian Super League (ISL) at the Kalinga Stadium here on Thursday.

Chennaiyin FC had scored the equaliser in the 94th minute via an Abdenasser El Khayati penalty, but Nandhakumar Sekar scored in the last minute to give a much-needed win to hosts Juggernauts. The win lifts Odisha FC from fifth to third, level on 15 points with Mumbai City FC.

Odisha FC made two changes to their starting eleven. Diego Mauricio dropped to the bench as Pedro Martin started his first game of the season for Odisha FC. Jerry Mawihmingthanga returned to the starting lineup, and Isaac Chhakchhuak started from the bench. Chennaiyin FC fielded the same team that won against Jamshedpur FC.

Odisha FC got their nose in front a minute after the half-hour mark, courtesy of an own goal scored by Vafa Hakhamaneshi. Sahil Panwar whipped in a cross from the left flank before Raynier Fernandes tried to head the ball down to Jerry. While attempting an interception, Hakhamaneshi redirected the ball into the back of his own net.

Chennaiyin FC made two changes at half-time. El Khayati and Rahim Ali came on to replace Julius Duker and Sajal Bag. Odisha FC also made a substitution at the break that raised a few eyebrows as Pedro was withdrawn and replaced by Mauricio.

Just two minutes into the second half, the Juggernauts were awarded a penalty after Panwar was taken out in the box by Prasanth Karuthadathkuni. Mauricio stepped up to take it and smashed it into the back of the net to end his five-game goal drought. Chennaiyin FC head coach Thomas Brdaric’s protests on the touchline earned him a yellow card.

But his team pulled one back at the hour mark. Shortly after appeals for a penalty were turned down, Ajith Kumar curled a ball into the box from the right flank before Petar Sliskovic flicked it on with his head and El Khayati slotted in their first goal with a composed finish.

In the 89th minute, Saul Crespo brought Hakhamaneshi down in the box and the referee pointed to the spot which El Khayati slotted in the equaliser from the spot. The delight did not last long as Odisha FC retook the lead via Sekar, who pounced on a stray ball that ca’e after Jerry’s run was thwarted in the final third.

The Juggernauts will remain at the Kalinga Stadium for their next game against NorthEast United FC on December 2. Chennaiyin FC stay seventh, sandwiched between the two Kolkata teams. They return to the Marina Arena to host Hyderabad FC on December 3.