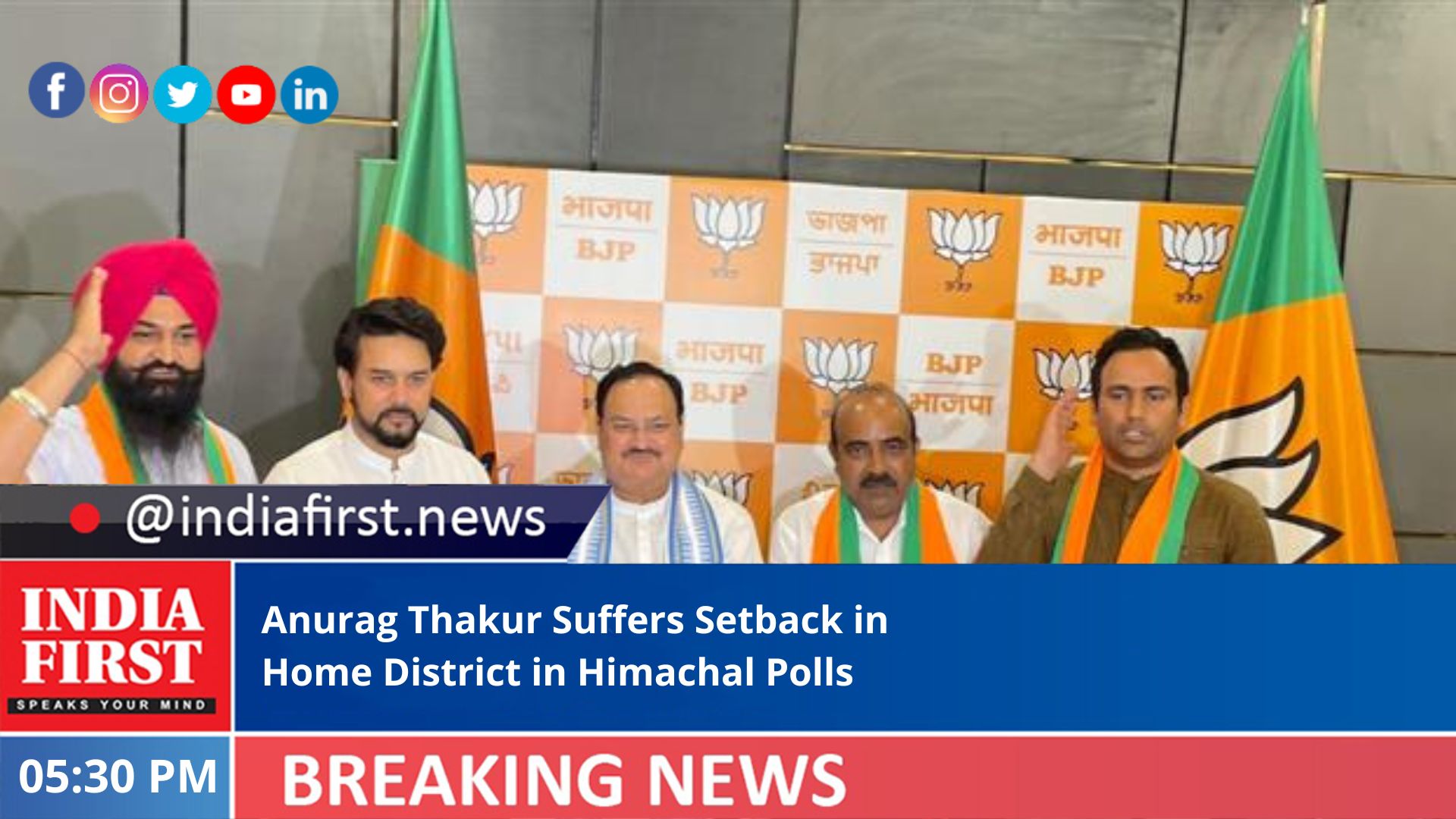 In a setback to Union Minister of Information and Broadcasting Anurag Thakur and his father Prem Kumar Dhumal, the Bharatiya Janata Party (BJP) has lost all the five Assembly seats in Hamirpur, the home district of the duo in Himachal Pradesh.

The Congress won four of the five Assembly constituencies in the district, while an Independent won the fifth seat, once the stronghold of the Dhumal family.

In the Hamirpur seat, both the BJP and the Congress faced defeat from Independent candidate Ashish Sharma, who won with a margin of 12,899 votes.

Two-time Congress legislator Rajinder Rana, who has learnt political lessons for years from his once-mentor and two-time chief minister Dhumal, defeated his nearest rival and BJP candidate Ranjit Singh by a slender margin of 399 votes. He won the seat for the third time.

In the 2017 Assembly polls, as the party registered a handsome win in a House of 68, the BJP’s chief ministerial candidate Dhumal had faced defeat in a straight contest by 1,919 votes in Sujanpur, where he was asked to contest from despite his reluctance.

This time Dhumal, who has contested many Assembly and parliamentary elections, was keen to avenge his 2017 poll defeat by entering the fray again.

His desire was dashed when the party leadership dropped his nomination from any of his two stronghold seats — Sujanpur and its adjoining Hamirpur.

During the campaigning, Thakur wept many a time publically, while praising achievements of his father.

The BJP leaders close to Dhumal admitted that the former chief minister, who played a crucial role for two decades in strengthening the party after the exit of Shanta Kumar, the first non-Congress chief minister in 1977, dropping from the election owing to his advancing age had sent a wrong signal among the party cadre.

They say the voters were emotionally attached to him after his defeat and they were keen that he should be given one more chance as Dhumal was keen to say goodbye to the party honourably, rather than with the blot of defeat on his face.

Even Dhumal had conveyed to the party central leadership about his desire to enter the fray.

Often referred to as “sadak wale mukhya mantra” or the Chief Minister who is credited with building roads, Dhumal helmed the state from 1998 to 2003 and from 2008 to 2012.

In the run-up to the polls, Dhumal had become active in the state politics by participating in public meetings, largely in his nurtured Sujanpur constituency.

“In politics one faces a defeat while another faces a win. It will be a failure on our part not to be able to give justice to the people (of Sujanpur). It’s time for introspection,” an emotional Dhumal had said after being defeated in 2017.

In political circles, Dhumal’s fading stature in political circles was also seen in the backdrop of the deliberate sidelining of Anurag Thakur’s father-in-law Gulab Singh Thakur, who was denied the party re-nomination this election owing to his advancing age.

In the past, Dhumal’s popularity and influence can be gauged from the fact that in all the Lok Sabha polls fought by his son, Dhumal was seen aggressively touring in his Hamirpur constituency to ensure his smooth return.

Since his maiden victory in the parliamentary by-election in May 2008, the image of Anurag Thakur is of a busy politician and cricket administrator who is rubbing shoulders with the high and mighty all the time.

For this reason, Dhumal is devoting his maximum time and energy in the constituency only to ensure his son’s victory, a senior BJP leader admits.

But party insiders told IANS that a strong anti-incumbency wave, which the ruling BJP didn’t perceive, was evident from the loss of three Assembly seats and one parliamentary seat in the October 2021 bypolls.