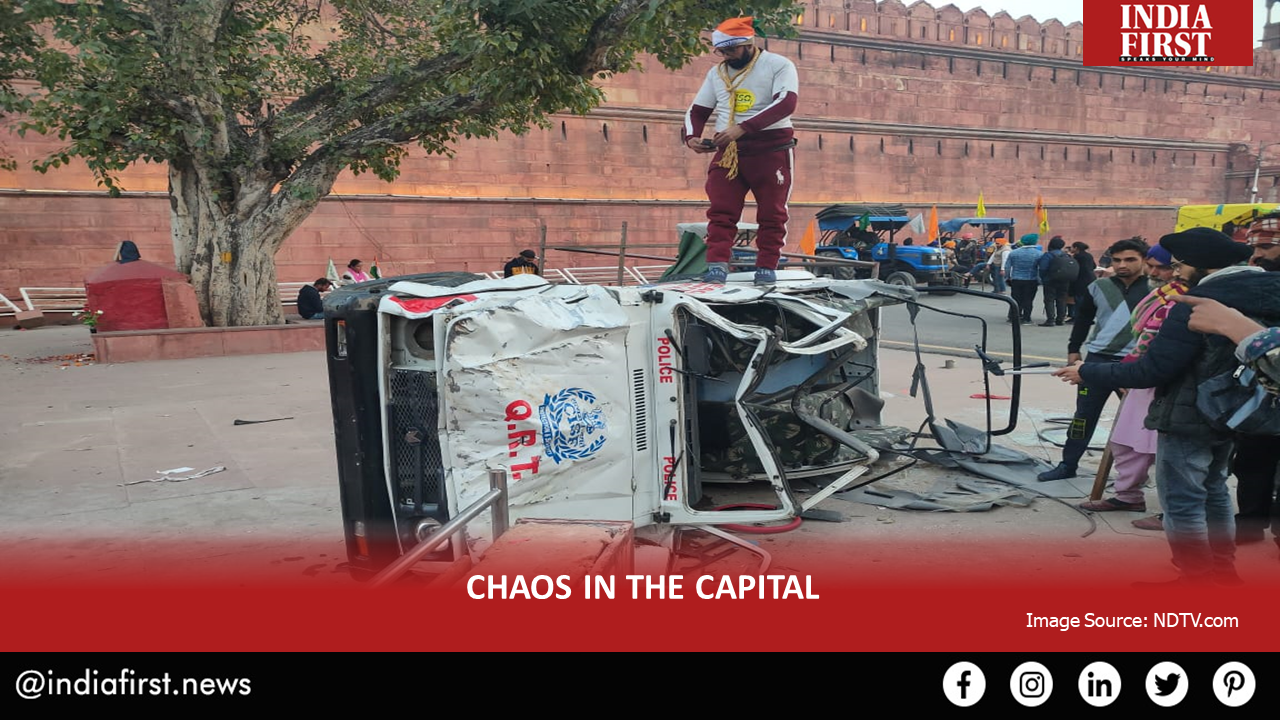 Still in the throes of a prolonged pandemic, India had expected its Republic Day this year to be different – but not so wildly different.

On this occasion, the nation is used to seeing a grand parade on Rajpath in New Delhi, in which its defence capabilities are displayed by the Indian Armed Forces as proudly as its varied sociocultural heritage is highlighted by states from across the land showcasing their uniqueness.

All of that did happen this time, too, at a reduced scale and in the presence of a much smaller crowd – but the spirit of the day when the Constitution was formally adopted 72 years ago was unfortunately dampened by some of the most unconstitutional acts that were perpetrated yesterday on January 26 in the national capital.

Farmer groups had long announced their intentions of a tractor rally on Republic Day in continuance of their protest against the Modi government’s new farm laws. Since the group leaders and the Centre were locked in a stalemate despite multiple rounds of talks and negotiations, the Supreme Court – and consequently the government – had allowed them to hold the rally on the day.

The only conditions set – and mutually agreed upon – were that the rally should be peaceful and be conducted at a certain time period and along designated routes.

But what eventually happened yesterday was anything but that. The protesters not only broke their promises, but managed to do far worse things than anyone had expected them to do.

The rally was scheduled to start after conclusion of the Republic Day celebrations by 11am. But a good few hours before that, over 200,000 protestors – brandishing swords, batons, flags and sticks – stormed into New Delhi, ramming through barricades along and within its borders with some 6000-plus tractors. The scene was of complete anarchy as they ran riot on the streets of the national capital, destroying public property along the way.

They came in such large strength that even a total of 50,000 security personnel from the paramilitary forces and police, who were initially meant to escort them during their rally, were hard put to check the violence that the vandalising protestors unleashed.

Besides, after entering from the border points in Singhu, Tikri and Ghazipur, the protestors grossly deviated from the designated rally routes. While one of the three rallies marched towards the Income Tax Office (ITO), another charged towards the Red Fort. None was supposed to be held anywhere near either of these places.

However, the most shocking event of the day for India as a nation happened at the Red Fort when the rampaging farmers forcefully entered the national monument – either by breaking the gates outside it or by climbing its ramparts – and hoisted the Sikh religious flags of Nisan Sahib on it.

After all, the Red Fort holds historic significance for being the venue where Prime Minister Jawaharlal Nehru had hoisted the tricolour on August 15, 1947, to officially declare India’s Independence from British rule. Since then, on every Independence Day, the Prime Minister of the country raises the Indian flag and addresses the nation from there.

Efforts by security forces to check the protestors all afternoon – through teargassing and baton-charging – resulted in clashes that got well over 100 police people hospitalised, with many of them sustaining serious injuries. There are reports that many of the tractor-driving protestors even tried to run over the police personnel who were trying to restore order. On the other side, one of the protesting farmers died as his tractor overturned after hitting a barricade.

By the evening of that day, when things had considerably quietened down, there was no doubt whatsoever about whose fault all of this was this time. The protesting farmers might have gotten a sense of satisfaction in being able to demonstrate their collective power, but it was a pyrrhic victory at best. Most farmer leaders from the Samyukt Kisan Morcha (the umbrella organisation of the 40 protesting farmers’ unions) soon realised and distanced themselves from the unfortunate event, blaming it on rogue elements.

There is no doubt that rogue elements were involved in the tractor rally. At this writing, FIRS have been filed against many farmer leaders who were seen to be instigating the violence that afternoon. Some 200 protestors have been detained. But the worst thing that has happened for those opposed to the three farm bills is that their protest has lost much of its credibility – and not to mention, whatever sympathy it had from the people of the nation.