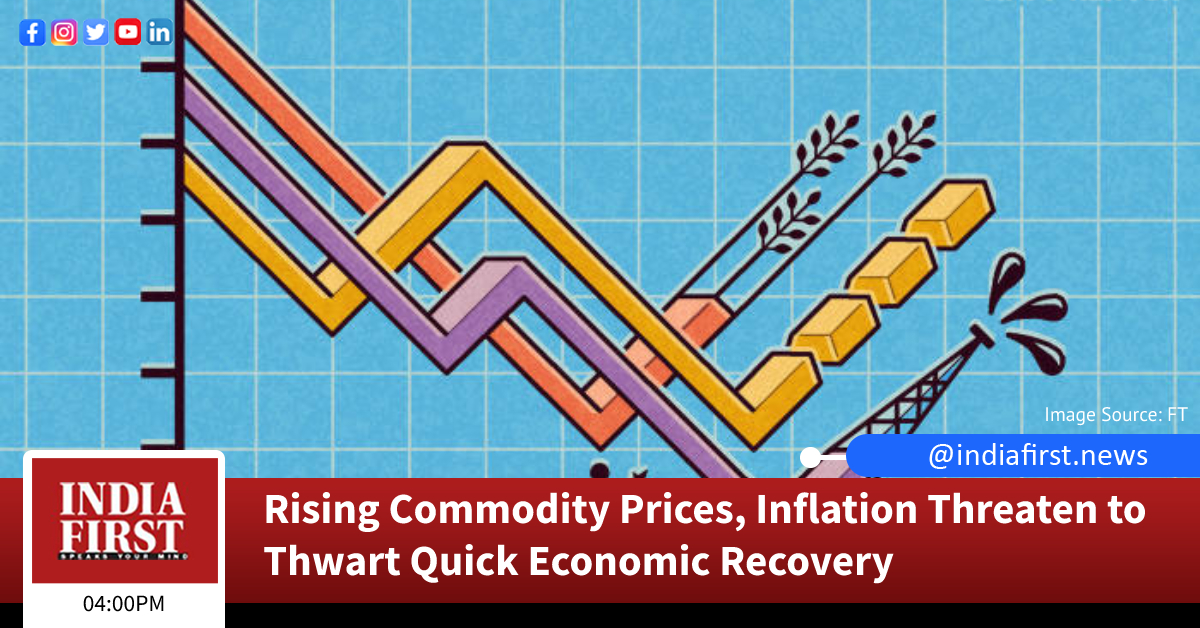 In the last 3-6 months, accelerated economic recovery along with global stimulus measures as well as ultra-low interest rates and commencement of vaccine drive have fuelled the surge in commodity prices.

Accordingly, prices of steel, cement, pharmaceuticals and even cotton yarn have skyrocketed.

Even food and fuel prices remain at elevated levels prompting producers and marketers to pass on the slightest cost escalation to end consumers.

According to economy watchers, this inflationary trend without a commensurate wage increase will hamper growth prospects in FY22.

Furthermore, rising prices will restrict the RBI’s ability to lower key lending rates and maintain liquidity levels to support demand in the economy.

At present, various predictions have pegged FY22 GDP growth in the range of 7-11 per cent.

However, the RBI is expected to maintain an accommodative stance and hold the repo rate at 4 per cent for the next 6-9 months to support the growth recovery.

The decade-low lending rates have cheapened finance for automobiles and home loans.

“Rise in inflation due to acceleration in commodity prices is going to be a major concern for the country’s growth prospects in FY22,” India Ratings and Research’s Principal Economist Sunil Sinha said.

“Unlike recent past, producers have now begun to pass on the increase in input cost to the output prices because absorbing rise in input cost is hitting their EBITDA margin and profitability.”

In fact, high oil prices along with those of steel and cement might adversely impact infrastructure creation as well.

The Centre is pinning hopes of reviving growth in the economy on infrastructure creation.

“Increase in fuel prices and the taxes cascade into higher transportation costs which adversely impacts competitiveness and exports.”

Besides, the clamour for a reduction in GST rates on steel and cement from 28 per cent to a lower level has begun.

Similarly, lowering of state and central levies on petroleum products have been demanded.

“There is an upside risk to both fuel and core inflation as global commodity prices have risen sharply and producers could pass on higher raw material prices amidst an anticipated V-shaped recovery along with progress in vaccination in the backdrop,” said Suman Chowdhury, Chief Analytical Officer, Acuite Ratings & Research,

“The pricing pressures are also due to an increase in global commodity prices, particularly oil and its impact on retail fuel prices.”

Notably, automobile OEMs have hiked prices to offset rising component and steel costs. This has risen the overall ownership cost and could dent future sales.

“While this could worry the policymakers, the policy stance will likely remain accommodative both on rates and liquidity front in CY21.”

Moreover, the country’s CPI-based inflation rose to 5 per cent YoY in February from 4.1 per cent in January.

Likewise, food and beverage price growth gained 4.3 per cent from 2.7 per cent in January.

The core CPI excluding food, fuel and light was up 5.6 per cent in February, from 5.3 per cent in January.

“If commodity prices continue to rise to a level that could choke off demand, then it may pose a downside risk to growth,” said Aditi Nayar, Principal Economist, ICRA.