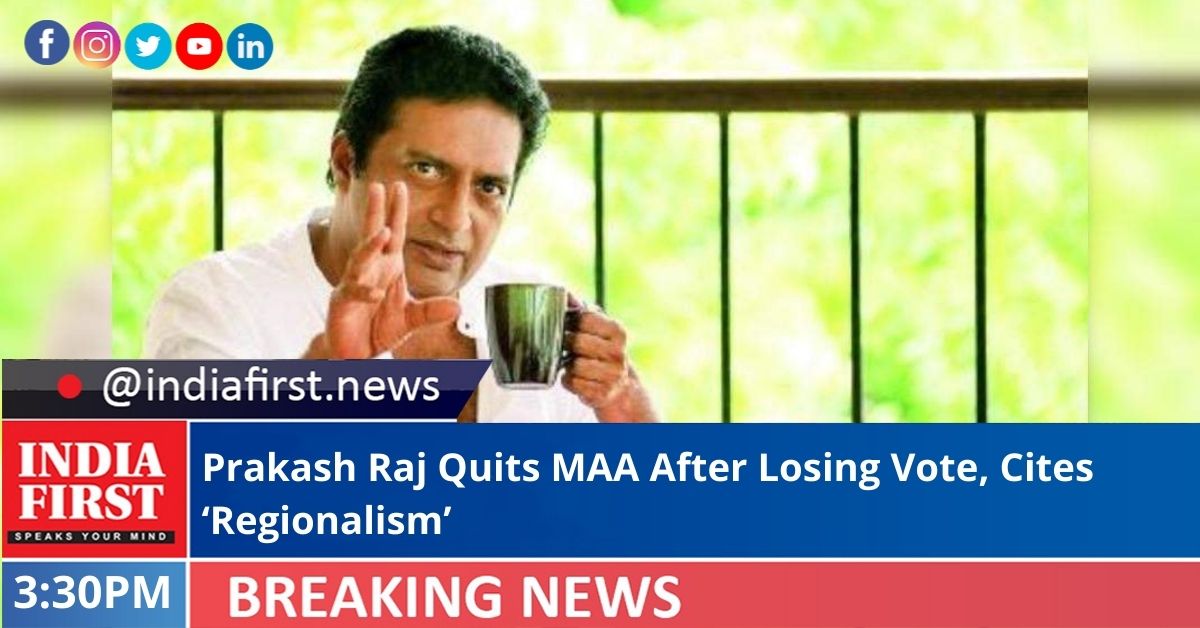 Stating that his self-respect does not allow him to continue in the MAA, he made it clear, however, that he would continue to act in Telugu films and maintain his relationship with the industry and fans.

Raj quit as a member of the MAA hours after he was defeated by Manchu Vishnu, son of the veteran actor Mohan Babu, by 107 votes in the bitterly contested election on Sunday. He was reportedly upset because he was dubbed a non-Telugu by the rival group.

Though a native of Karnataka, Raj has worked in films in all four South Indian languages.

“You wanted a Telugu to be elected to the post,” Raj said at the news conference where he announced his resignation, ending his 21-year-old association with the industry body. “The members supported you and they elected a Telugu ‘bidda’ (son). As an artiste, I have self-respect, hence I am resigning from the MAA membership,” he added.

Actor Naga Babu, brother of megastar Chiranjeevi, who had declared his support for Prakash Raj also said he was quitting the MAA.

“Seniors such as Mohan Babu, Kota Srinivas Rao and Ravi Kumar openly said that when you come as a guest you should stay as a guest,” Raj said. “Hence I have decided to continue as only a guest.”

The actor pointed out that the Vishnu panel had even promised to amend MAA bye-laws to ensure non-Telugu members did not contest the elections. “I am not a Telugu ‘bidda’,” he said. “My parents weren’t Telugu. It is neither their fault, nor mine.”

Raj lamented that words such as ‘tukde tukde gang’ and ‘terrorists’ were used in the election campaign. He pointed out that the BJP leader Bandi Sanjay, while congratulating Vishnu and others, commented that “nationalism” had won the elections.

Raj had unsuccessfully contested the Lok Sabha elections as an Independent candidate from the Bangalore Central Lok Sabha constituency in the 2019 general elections.