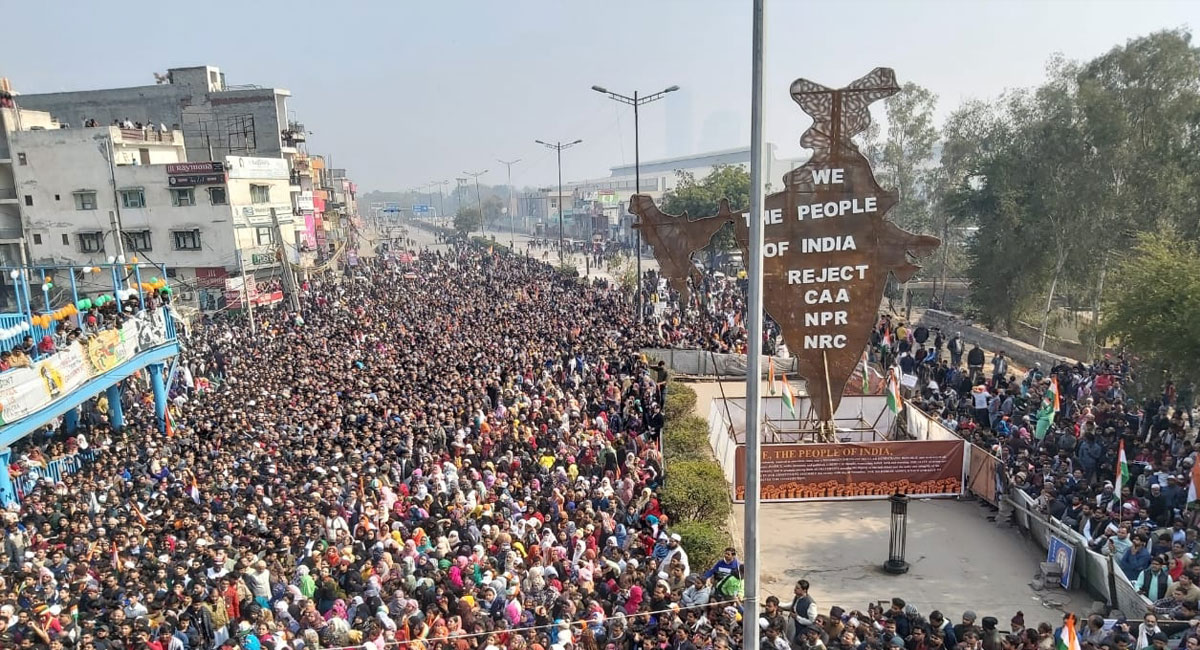 There is little doubt that the Aam Aadmi Party (AAP) is the frontrunner in the February 8 Delhi Assembly elections, but the Bhartiya Janata Party (BJP) seems to be steadily reducing the gap after diverting all attention from Chief Minister’s Arvind Kejriwal’s performance pitch to the Shaheen Bagh protests, turning the election into a “nationalist vs anti-national” debate.

The political battle in Delhi has shaped into a direct contest between the AAP and the BJP. While the AAP continues to target the Centre’s policies for the national capital, the BJP calls the Arvind Kejriwal government’s performance a bundle of lies and betrayal of the people of the city.

Even though the Congress is also critical of the recently released Delhi government’s report card identifying ten key developments, the AAP has chosen to train its guns on its primary challenger – the BJP.

The protests against Citizenship Amendment Act (CAA) in Shaheen Bagh were a turning point in the Delhi elections and shifted all the attention from AAP’s election slogans of cheaper electricity, free water, free medical treatment and quality education to the road blockade and protests in the Delhi area.

The BJP has weaponised the issue and is forging its election strategy around it by polarising voters, but whether this will pay off in the elections is a question that can be answered only when the results are declared on February 11.

Critics say the BJP cannot keep winning elections by banking on political polarisation. In fact, the party’s recent losses in Jharkhand and Maharashtra have been attributed to voters rejecting its divisive politics.

Findings of the IANS/C-Voter Delhi Tracker indicate that with each passing day, Delhi voters appear to be getting increasingly concerned with economic issues and less worried about development issues. While the AAP continues to hold on to its lead position in the survey, the breakup of data throws up some interesting trends.

As many as 55.4 per cent respondents say they will vote for the AAP, if Delhi elections are held on January 16, according to IANS-CVoter Delhi poll tracker 2020. However, 56.9 per cent of the respondents have thrown their weight behind the Saffron party, so far as Lok Sabha elections are concerned.

BJP leaders have claimed that the party has succeeded in giving out a message to the public that the Shaheen Bagh protest is being spearheaded by those who do not recognise the law made by the country’s Parliament.

“We had understood the intentions behind the Shaheen Bagh protest since leaders of the Congress, the Left, students of Jawaharlal Nehru University, and others were making a beeline for the protest site,” said a senior Bharatiya Janata Party leader.

Requesting anonymity, the leader said the party leadership then decided to adopt a wait-and-watch strategy. “Some party leaders were directed to issue statements in reaction to the stand of opposition leaders. Seeing the effect these statements had, the party then chalked out a solid strategy on the issue.”

At an election rally, Union Home Minister Amit Shah told the voters to help the BJP make a Delhi where “there is no Shaheen Bagh”. He said, “Your vote to BJP candidate will make Delhi and the country safe and prevent thousands of incidents like Shaheen Bagh. When you press the button [on EVM] on February 8, do so with such anger that its current is felt at Shaheen Bagh.”

Union Law Minister Ravi Shankar Prasad said: “It is offering platform to ‘Tukde Tukde Gang’ elements under the garb of opposition to the Citizenship Amendment Act. This protest is not just a protest against CAA it is a protest against Modi.”

Ravi Shankar Prasad alleged Congress leader Rahul Gandhi and Delhi CM Arvind Kejriwal are supporting the “tukde-tukde” gang. This was on the lines of BJP president JP Nadda’s posts on Twitter accusing Kejriwal of “supporting those who want to break India into pieces”.

The BJP’s narrative of the Shaheen Bagh protests found takers after some video clips of some of the controversial slogans and speeches by protesters at Shaheen Bagh began doing the rounds of social media, particularly on WhatsApp.

The BJP’s biggest drawback in this election is that it lacks a charismatic leader like AAP’s Arvind Kejriwal. It works to AAP’s advantage that the BJP has not announced its chief ministerial candidate in this election. The 2015 Delhi election was a direct contest between Kejriwal and Kiran Bedi, but this time Modi has been largely absent from the campaign trail.

The C-Voter survey suggests that Kejriwal enjoys the support of 70 per cent of Delhi’s electorate as the most-suitable chief ministerial candidate. The BJP which had been on a winning streak till November last year has begun to see a reversal in its fortunes. With its chief competitors AAP and the Congress treading with caution over the Shaheen Bagh sit-in protest, the BJP has only the controversy around Shaheen Bagh to sway voters. It also helps that the Congress, which ruled Delhi for 15 years, appears to be a non-entity in the upcoming polls.

The AAP and the BJP will only have more votes to gain in the absence of any contest from the Congress. If the opinion polls are correct, Kejriwal’s AAP is set to repeat its landslide win in 2015. But whether the Shaheen Bagh issue has changed public sentiment in favour of the BJP ahead of the polls will only be known when counting in the national capital begins on February 11.