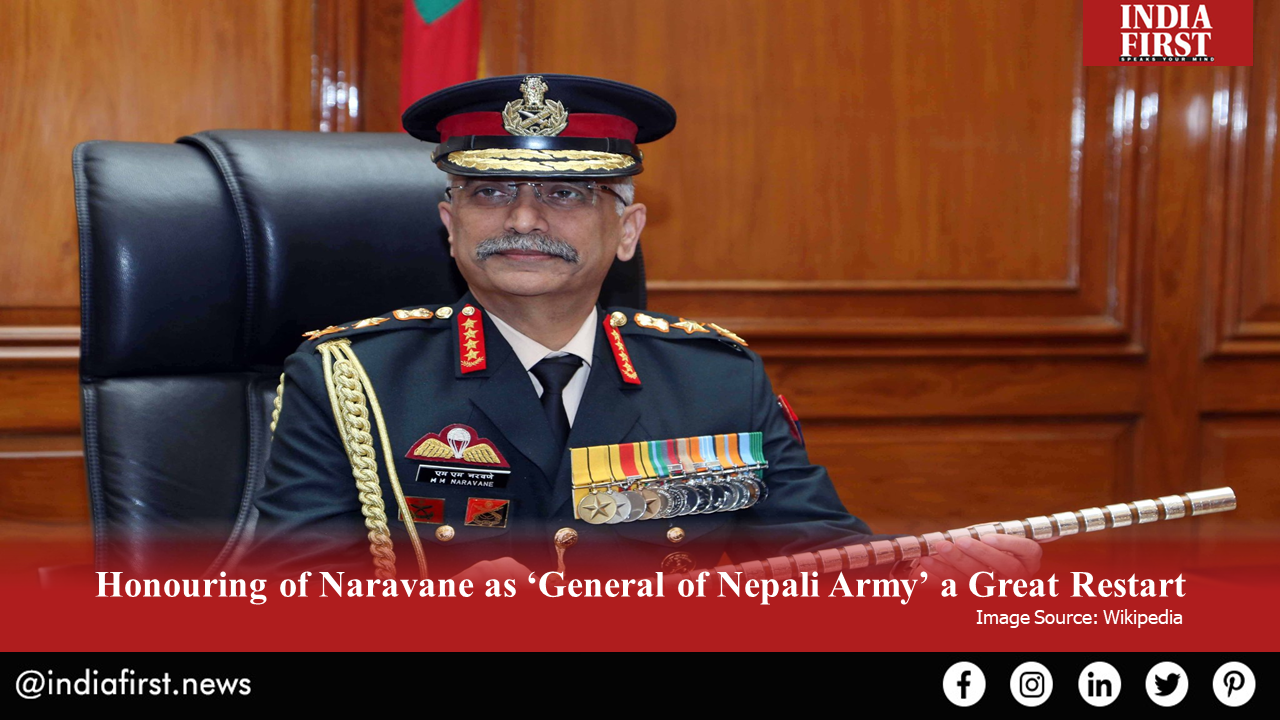 Keeping up a 70-year-old tradition of honouring the army chiefs of each other’s countries, the Nepalese government recently bestowed the honorary title of ‘General of Nepali Army’ on Indian General Manoj Mukund Naravane. In a function at the Presidential Palace of Nepal, the Naravane was conferred the honour of General of Nepali Army in the presence of Prime Minister KP Sharma Oli and other high-profile officials of Nepal.

The tradition of conferring the title on Indian generals had started back in 1950 when Indian Commander in Chief, General K M Cariappa, was given the honour by the Nepalese government. This tradition is a unique example of cross-border cooperation and is a depiction of the mutual respect shared between the two neighbouring countries as their armies honour each other and the symbol of brotherhood in the Indian subcontinent through the honorary titles.

Last year, Nepalese general and chief of Nepalese Army General Purna Chandra Thapa had similarly been made the honorary General of Indian Army.

Naravane’s honorary title came at a time when he was on a three-day visit to the small Himalayan country to repair strained ties between New Delhi and Kathmandu. In the recent past, India and Nepal have shared a rocky cross-border relationship after India constructed an 800 KM cross border road that connected India and China.

This ruffled Nepal’s feathers as it is allegedly constructed across regions of the territory Nepal claimed. Following this, Nepal has been making many aggressive moves on the Indo-Nepal border, deploying police troops at the border and making constitutional amendment to include the 400 sq km of disputed region in its territory that was not a part of the country before. The Nepal police had earlier engaged in violence with Indians at the Indo-Nepal border and killed one Indian national and injured three others.

In a move to extend the camaraderie between the two countries, Major Naravane also gifted the Nepali army basic medical equipment, including X-ray machines, ICU ventilators, ambulances, anaesthesia machines, and other COVID-19 protection set-ups necessary to battle the pandemic raging in the world.

Major Naravane had engaged in talks with his counterpart and Nepal Army Chief, General Purna Chandra Thapa, to help the two countries resolve their differences and enhance bilateral cooperation. The general also met the Indian army pensioners who live in Nepal now. The community of Nepali Indian army pensioners is a strong link between India and Nepal and increases the harmony between the two countries and its citizens.

It is to be hoped that these recent developments go a long way in renormalising relations between the two traditionally close neighbours.