2 Better than 1: Both Covishield, Covaxin Okayed for Emergency Use in India | India First e Newspaper Skip to navigation Skip to content 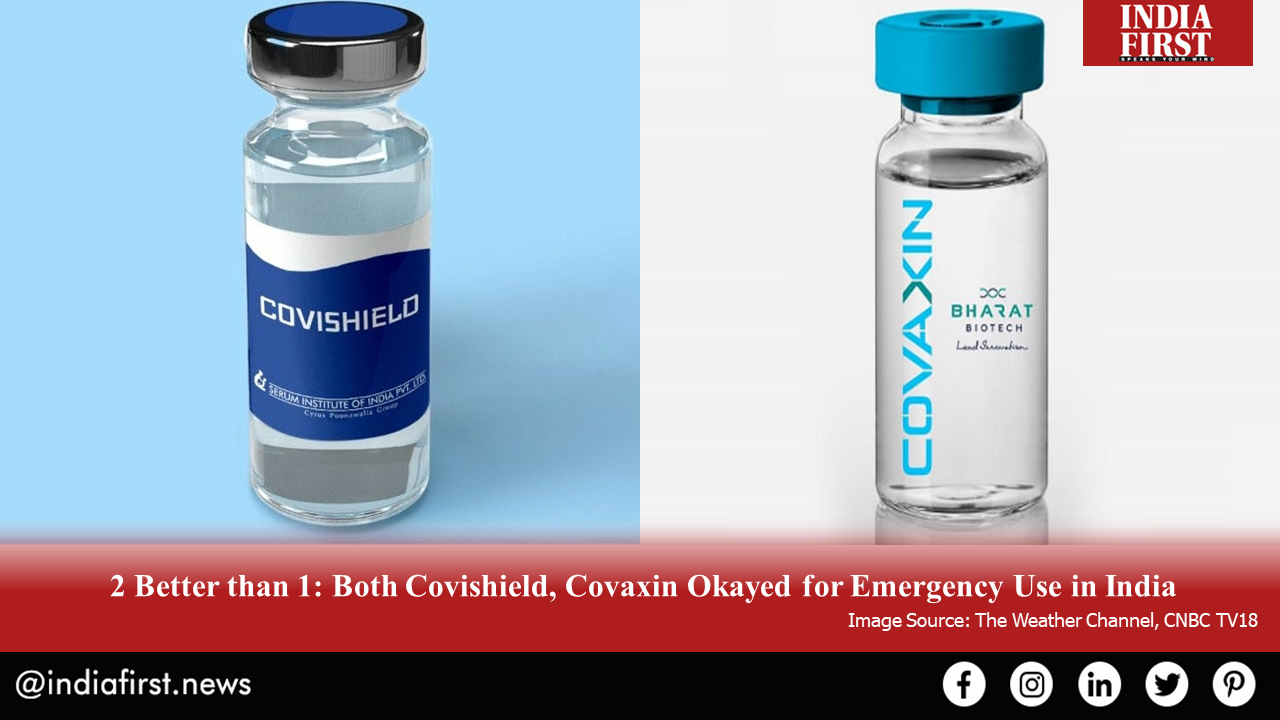 The Drug Controller General of India has cleared two Covid-19 vaccines, Covaxin and Covishield, for emergency use around the country. With this clearance, the DCGI has heralded the imminent beginning of mass vaccination campaign nationwide.

The Covishield vaccine produced by Serum Institute of India has a 70.42 percent efficacy, while the efficacy of Bharat Biotech-produced Covaxin is undisclosed as of now as it is still under clinical trial. The ongoing clinical trial of Covaxin has 25,800 participants, out of which 22,500 participants have received at least one dose of the vaccine.  The DCGI expert panel that cleared the two vaccines also recommended that the vaccines be administered in two doses each.

For the under-trial Covaxin, the DCGI has stated that individuals receiving it will need to give an informed consent and the vaccine administration will have to follow a yet-to-be-finalised safety protocol.

The two approved vaccines will still have to undergo clinical trials even now, the DCGI informed the media. The research institutions responsible for their clinical trials will have to share the data collected from the trials on a fortnightly basis for the first two months and then on a monthly basis for subsequent months.

Following the Central Drugs Standard Control Organisation (CDSCO) clearance for SII and Bharat Biotech’s vaccines, Prime Minister Narendra Modi took to his official Twitter handle to express his happiness on the occasion of the historic decision which has the power to reshape India’s approach and outlook on the long-drawn battle against Covid-19.

The Prime Minister tweeted that the clearance for the two indigenously produced Covid-19 vaccines will make every Indian proud and will prove to be decisive turning point for the nation’s efforts to eradicate Covid-19. He also hailed the skills of the scientific community of India that made the vaccines possible.

After the two vaccines received approval, many members of the Opposition raised objection against Covaxin on grounds that its clinical trials have yet to be finished. However, the Union Health Minister shut down the critics by assuring everyone that Covaxin is likely to be the most effective against the new variant of Covid-19 that has been recently discovered. This is because its formulation includes other immunogenic proteins, including the original spike protein that is the main cause behind the pathogenicity of the Covid-19 virus.

The health minister said Covaxin recipients will be tracked and their vitals monitored just like individuals participating in the clinical trials of the vaccine. He also defended his government’s decision to approve the under-trial vaccine by saying that approving the two vaccines together will give a backup to the government that can act as an additional shield against the Covid-19 virus for the citizens, especially against the new UK variant.

While some people might be doubtful regarding the biosafety of the new vaccines, most people of the nation have hailed the government decision as a welcome one.