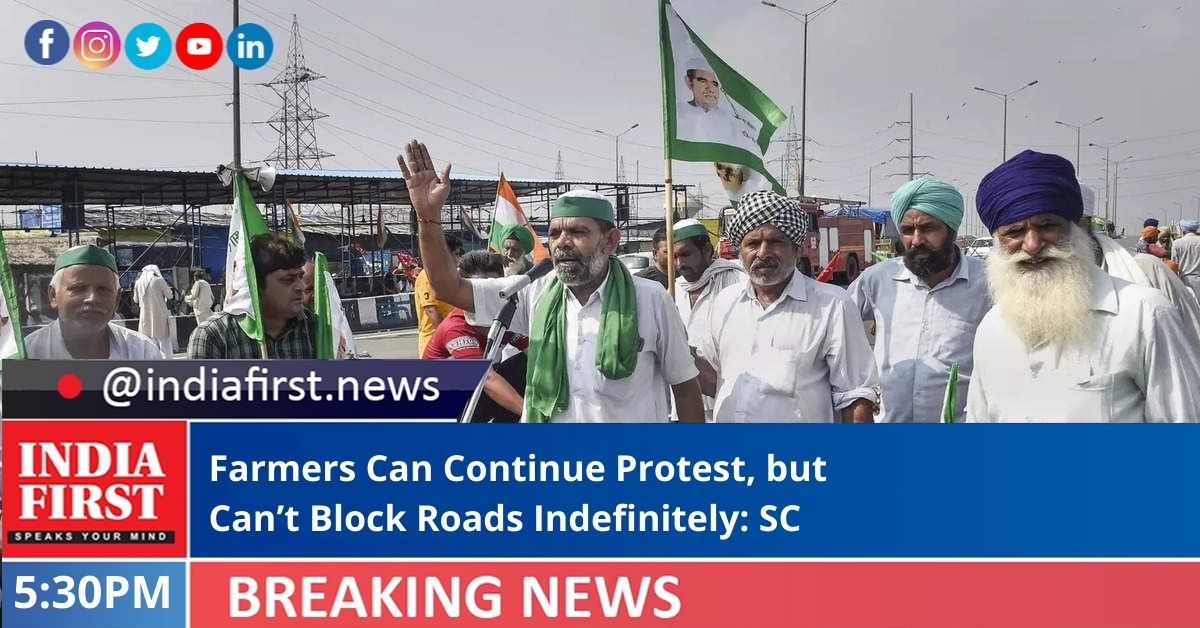 The Supreme Court today reiterated that farmer groups have the right to protest, but they cannot keep roads blocked indefinitely. The top court has sought response from Samyukt Kisan Morcha (SKM), an umbrella body of farmer unions, and other farmer unions on a petition filed by a woman resident of Noida seeking direction to ensure that the road between Noida to Delhi is kept clear for smooth traffic movement.

Senior advocate Dushyant Dave, representing the farmers’ group, submitted before a bench headed by justice Sanjay Kishan Kaul that road blockade would end, if permission is granted to continue the protest either at Ramlila Maidan or Jantar Mantar.

Solicitor General Tushar Mehta, on his part, cited Republic Day violence and emphasized this happened despite farmer unions, had given an undertaking that there will be no violence during tractor rally scheduled on January 26. Dave claimed that January 26 violence was engineered, and added that the road management can be done better by the police.

The bench also comprising justice M.M. Sundresh told the farmers group counsel that they may have a right to agitate in any manner but roads should not be blocked like this. “People have right to go on roads, it cannot be blocked”, noted the bench.

The bench asked SKM and other farmer unions to file their response in four weeks in the matter, and scheduled the matter for further hearing on December 7.

The top court was hearing a plea by a Noida-resident Monicca Agarwal complaining of delays in daily commute caused due to the road blockade by farmer groups.

Another bench headed by justice A.M. Khanwilkar, had questioned the rationale behind farmer groups continuing their protest, wherein national highways have been blocked, in the backdrop of stay on three contentious farm laws. The bench headed by justice Khanwilkar had said it will examine whether those protesting against farm laws have a right to do so even after challenging the contentious legislations in the top court.